Proverbs 15:14 “The heart of him that hath understanding seeketh knowledge: but the mouth of fools feedeth on foolishness.”

This false prophet and his band of deceived followers, need to pick up a REAL BIBLE, and read the account of WHY Joseph and Mary went to Bethlehem, and then later into Egypt. They were NOT Immigrants, NOT Refugees, and NOT Illegal Aliens! 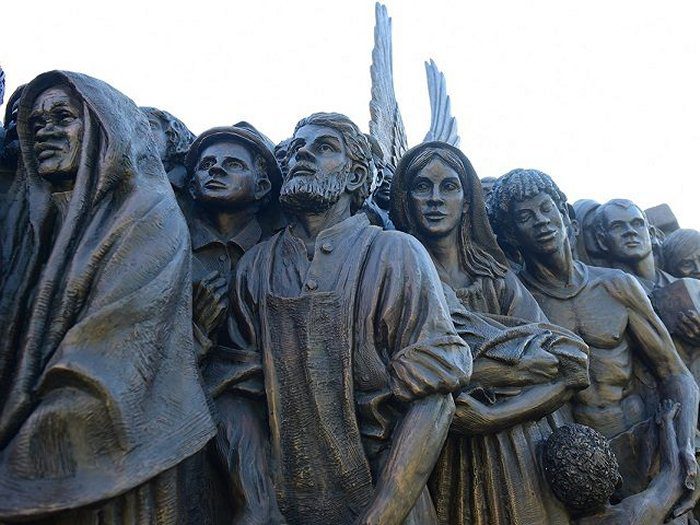 Excerpts from Thomas D. Williams, Ph.D. | Breitbart News – The Vatican lit up the figures of Mary, Joseph, and Jesus in a sculpture of migrants and refugees Friday to highlight their status as immigrants.

On Friday afternoon, the Vatican unveiled its Nativity scene and the Christmas tree set up in St. Peter’s Square. During the same event, the figure of the Holy Family represented in the massive Angels Unawares migrant sculpture was illuminated.

The bronze sculpture, which depicts a boat with a group of migrants and refugees from different cultural and racial backgrounds and from various historical periods, received “a particular lighting aimed at the three figures that reproduce the Holy Family of Nazareth,” the Vatican’s office for Migrants and Refugees announced.

It is “a sign to highlight the profound meaning of Christmas and to remember that Jesus too, with Mary [and] Joseph, was a migrant, fleeing to save his life,” it declared in a statement.

Pope Francis told pilgrims gathered in Saint Peter’s Square this past September that he had dedicated his Message for the commemoration of the World Day of Migrants and Refugees “to the internally displaced, who are forced to flee, as also happened to Jesus and his family. ‘Like Jesus, forced to flee,’ likewise the displaced, migrants.”

Pope Francis has often compared migrants to Jesus Christ, suggesting the cold welcome Christ received upon entering the world is similar to the reception many migrants experience.

“Jesus knows well the pain of not being welcomed,” the pope said in a 2018 tweet for International Migrants’ Day. “May our hearts not be closed as were the houses in Bethlehem.”

During the flight into Egypt, “the child Jesus experienced with his parents the tragic fate of the displaced and refugees,” Francis said earlier this year, “which is marked by fear, uncertainty and unease.”

When Pope Francis compared the Holy Family’s trip to Bethlehem to international migrants, a number of attentive social media users pointed out that Joseph and Mary were not immigrants in Bethlehem, but were, in fact, returning to Joseph’s hometown of Bethlehem to be counted and taxed as Roman subjects.

No Catholics and other Biblically Ignorant Fools—Jesus, Joseph, and Mary were not refugees. They were hardly migrants.

2nd Timothy 2:15 “Study to shew thyself approved unto God, a workman that needeth not to be ashamed, rightly dividing the word of truth.”

The BIBLE tells us the story in question. And if most of you would turn off the TV, put the phone down, Study the Word of God, THEN all of this false doctrine and idiocy would NOT grow feet!

An angel of the Lord came to Joseph, told him to take Mary and Jesus out of Judea and into Egypt in order to escape the murderous clutches of Herod. Joseph obeyed, and rode out into the night with his divinely given charges. It was there they stayed until Herod died.

On another note. People mistakenly think that Jesus was an infant when the wise men found him in Bethlehem. Probably not correct!

Matthew 2:1-2 “Now when Jesus was born in Bethlehem of Judaea in the days of Herod the king, behold, there came wise men from the east to Jerusalem, 2 Saying, Where is he that is born King of the Jews? for we have seen his star in the east, and are come to worship him.”

Matthew 2:11 “And when they were come into the house, they saw the young child with Mary his mother, and fell down, and worshipped him: and when they had opened their treasures, they presented unto him gifts; gold, and frankincense, and myrrh.”

We know that the magi were wise men from “the East,” most likely Persia, or modern-day Iran. This means the wise men traveled 800 to 900 miles to see the Christ child. Most likely, the magi knew of the writings of the prophet Daniel, who in time past had been the chief of the court seers in Persia. Daniel 9:24-27 includes a prophecy which gives a timeline for the birth of the Messiah. Also, the magi may have been aware of the prophecy of Balaam (who was from the town of Pethor on the Euphrates River near Persia) in Numbers 24:17. Balaam’s prophecy specifically mentions a “star coming out of Jacob.” Source

We think it today’s travel by Planes, Trains and Automobiles. They only had Horses, Donkey’s, Camel’s, and of course good ole foot travel. That is why Herod had all male children two and under killed. He deduced Jesus could be as old as two!

Matthew 2:16 “Then Herod, when he saw that he was mocked of the wise men, was exceeding wroth, and sent forth, and slew all the children that were in Bethlehem, and in all the coasts thereof, from two years old and under, according to the time which he had diligently enquired of the wise men.”

However, one thing that goes completely overlooked or ignored is that, at that time, Judea and Egypt (then known as Aegyptus) were all within the borders of the Roman empire. Both countries were occupied land under Ceaser, and even though Herod was King of Judea, he ruled on behalf of Ceasar. Jesus and His family, while provincial citizens, were what we would consider Roman nationals who paid taxes to Rome though they weren’t necessarily citizens of the Roman state. Fleeing to Egypt, then under the personal control of Augustus himself, was on par to moving from New York and into Texas.

There was no border, nor was there a sovereign country at the time

While it could be considered migration to move from one state to another, it’s hardly the international journey Communist Democrats would like it to be. Jesus and his family were Roman nationals moving from one Roman country to another. They were NOT aliens in the legal sense, and it was perfectly legal to travel from one Roman province to another. In fact, Egypt had a vibrant Jewish community at the time.

An “immigrant” Jesus was not, at least not in the way the Communists would have you picture it, with Joseph and Mary banging down the doors of some unjustly constructed wall, pleading for the mercy of a foreign state to allow them into their lands.

With that under our belt, let’s now tackle the “refugee” portion of the argument. Here things get a bit legalistic.

If you don’t look carefully, that looks pretty cut and dried. Jesus was fleeing persecution from Herod and sought safety in a different territory. Refugee!

But not so fast. The problem the left arrives at here is that a refugee is someone seeking asylum in a country of which they are not a national, as it says in the treaty. Again, Jesus and His family were what we would consider Roman nationals. While they did flee Herod’s hunt, they didn’t flee to a nation outside their own.

Hypothetically, if I were a California resident and one of its leaders marked me for death, causing me to flee to Texas, I wouldn’t be a refugee in any legal sense. I stayed within the United States, just out of the jurisdiction of California leadership. I still pay the same federal taxes and obey the same federal laws. I never left the country of my nationality, and though I did swap states, I didn’t have to apply for asylum, I just moved there. I’m not a refugee hiding out in Canada, I’m an American living in America.

While on the surface, arguments can be made that Joseph and his family were immigrants and refugees, it’d be a shallow definition of the events that transpired, ignoring a lot of the facts. Facts that would fly in the face of arguments being made by the left to make the Holy family seem just like the left’s latest living, breathing talking points. They weren’t.

The above was sourced from Brandon Morse at Red State. I added my 2 cents in the mix!