I had no idea who this Devil was, but when I saw his picture, now this news makes perfect sense!

Update 6/9: This came to light about this Disciple of Satan – DC Archbishop Gregory Knew About Trump’s Historic Visit to John Paul II Shrine a Week Before Event — Then Lied and Feigned Outrage to the Press 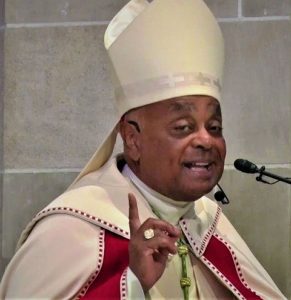 ChurchMilitant.com – In a bald-faced violation of their individual civil rights as American citizens, Washington, D.C.’s Archbishop Wilton Gregory is ordering his clergy to dress in cassocks (or at least blacks) and protest President Trump at 11 a.m. Monday morning at Lafayette Park, and then march to the White House at noon.

It’s being billed as a pro-life, anti-racism rally, but at least one email from the archdiocese to clergy being circulated (see below) explicitly calls it a “protest.”

Inside sources tell Church Militant that Gregory is angry at the local D.C. Knights of Columbus who had invited President Trump to the John Paul II National Shrine, an invitation reportedly extended weeks earlier.

The sources inform Church Militant that Gregory retaliated against the local council and ordered them to send out an email to their own pro-life list and to bill it as a “pro-life rally.” Threatened behind the scenes by Gregory, the D.C. Knights complied. The email reads…..