Leo Zagami – Last week Archbishop Wilton Gregory of Washington, the first African American to hold such a position doubled down on his criticism of President Donald Trump’s visit to the Saint John Paul II National Shrine, that is dedicated to the memory of the late Polish pope that for progressive Jesuit agent Wilton Gregory should have “never been used as a place for a political statement.”He added:“Long before he became Supreme Pontiff, he was battling systems that were intended to destroy, weaken, or certainly, deny human dignity.” 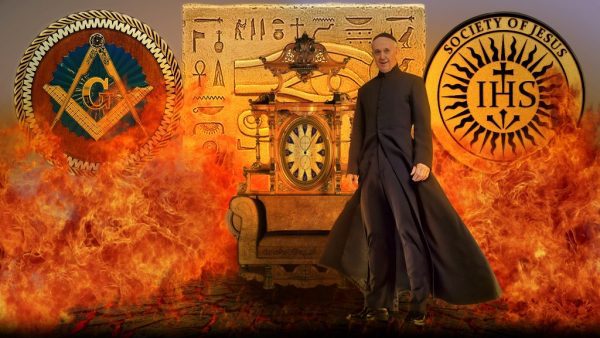 Well, those “systems” that Karol Wojtyla, the future Saint John Paul II had to fight was called Communism,  and it’s the same system  Archbishop Wilton Gregory of Washington is now supporting. On top of that, Abp. Gregory received an invitation to the president’s event at the Saint John Paul II Shrine the week prior to the president’s visit  but he declined due to other commitments.

The Catholic Church is now a full-on anti-Christian institution working to undermine the President of the United States of America worldwide.  In Nigeria, for example, a Catholic monk Fr. Cornelius Ejiogu declared that the Church could not remain silent against police brutality in Americaandorganized anti-Trump protests with its clergy. But Josephite Fr. Cornelius Ejiogu forgot to mention the ongoing persecution of Christians by Islamic fundamentalists.

Only a few days ago, a group of Muslims armed with machetes hacked to death a 3-year-old girl and nine defenseless Christians in Nigeria’s Kaduna state the same week Josephite Fr. Cornelius Ejiogu organized his demented protests. Black British politician David Kurten was shocked by the hypocrisy of this clergyman, in particular, saying, “It is nonsensical and hypocritical for a priest to protest against Trump, who has visited churches to openly display his solidarity with Christians.”

The member of the London Assembly added : “While ‘Black Lives Matter’ and Antifa protestors are assaulting police officers, looting businesses and feigning self-righteousness against President Trump, they have no concern for real black lives, which are being devastated around the world. There is not even any mention by these Marxist mobs of the thousands of black Christians who have been massacred, raped, or mutilated by Fulani Islamists in central Nigeria this year. “

In the meantime, Abp. Claudio Maria Celli, the Vatican official who helped draft the provisional Vatican-China deal in 2018, is saying the Holy See will likely renew the accord signed with the Chinese Communist Party (CCP). “The Catholic Church in China must be fully Chinese, but fully Catholic! There are no discounts to make,” Abp. Claudio Maria Celli recently said on Italian television confirming once again the Satanic direction of the Chuch of Rome that we should now consider an enemy of the United States of America.

One last thing regarding the Holy See. Vatican authorities arrested and took into custody a few days ago an Italian broker who was involved in the Vatican Secretariat of State’s majority stake purchase of a property in London’s posh Chelsea district. In a statement released June 5, the Vatican said Gian Piero Milano, Vatican chief prosecutor, and his deputy, Alessandro Diddi, authorized the arrest of the broker, Gianluigi Torzi, after he was interrogated at the Vatican prosecutor’s office.

Get Leo’s New Edition of Confessions of an Illuminati Volume 5: The Decline of the West and the Rise of Satanism in our Society with a brand new chapter on the CCP virus and The End Times.

You can find it now on Amazon in both paperback: