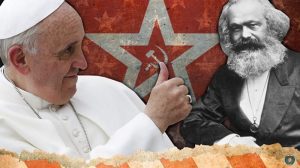 Robert Spencer | PJ Media – It is well known by now that the famous rhetorical question “Is the Pope Catholic?” doesn’t have a certain answer anymore. The present occupant of the Chair of St. Peter, however, has more than once given cause to ask instead, “Is the Pope Marxist?” To the surprise of nearly everyone in the world, however, Pope Francis has just warned against the dangers of Marxist theology. The Spanish-language Argentine edition of Aleteia reported Saturday that, in a letter to the Santa Maria Spirituality Center in Buenos Aires, the Pontiff warned against “the ideologizing of a Marxist tint of some Latin American centers in the ‘70s.”

Wait a minute. This is the pope who wrote in his 2020 encyclical Fratelli Tutti, “The marketplace, by itself, cannot resolve every problem, however much we are asked to believe this dogma of neoliberal faith. Whatever the challenge, this impoverished and repetitive school of thought always offers the same recipes. Neoliberalism simply reproduces itself by resorting to the magic theories of ‘spillover’ or ‘trickle’ – without using the name – as the only solution to societal problems.” Actually, the name “trickle-down economics” is indeed used by critics of the view that those who innovate, create, and provide employment opportunities for others should be penalized for doing so.

The pope went even farther in the same encyclical, stating that “the Christian tradition has never recognized the right to private property as absolute or inviolable, and has stressed the social purpose of all forms of private property.” Instead, “the principle of the common use of created goods is the ‘first principle of the whole ethical and social order’; it is a natural and inherent right that takes priority over others,” which certainly sounds a great deal like Marxism. Francis emphasized that this “common use of created goods” took precedence over any concept of private ownership: “All other rights having to do with the goods necessary for the integral fulfilment of persons, including that of private property or any other type of property, should – in the words of Saint Paul VI – ‘in no way hinder [this right], but should actively facilitate its implementation.’”

Only then did the pope grudgingly allow a place for individual ownership at all: “The right to private property can only be considered a secondary natural right, derived from the principle of the universal destination of created goods.” He lamented that this vision had not been widely implemented: “This has concrete consequences that ought to be reflected in the workings of society. Yet it often happens that secondary rights displace primary and overriding rights, in practice making them irrelevant. … The right to private property is always accompanied by the primary and prior principle of the subordination of all private property to the universal destination of the earth’s goods, and thus the right of all to their use.”

It would be hard to isolate any aspect of that statement that wasn’t Marxist, but to be sure, Pope Francis has explicitly rejected Marxism before. Back in 2013, just nine months after becoming pope, he sought to allay suspicions he had aroused with his initial Leftist statements. “The ideology of Marxism is wrong,” he said, then hastened to add that lots of Marxists were nice guys. “But I have met many Marxists in my life who are good people, so I don’t feel offended.” He took that opportunity also to bash “trickle-down” economics: “There was the promise that once the glass had become full it would overflow and the poor would benefit. But what happens is that when it’s full to the brim, the glass magically grows, and thus nothing ever comes out for the poor … I repeat: I did not talk as a specialist but according to the social doctrine of the church. And this does not mean being a Marxist.”

Well, all right, but it’s hard to see any air between the Marxist view and that of the pope. Capitalists want to give free rein to entrepreneurs, whose success will lead them to hire others and thereby benefit everyone. Marxists want to penalize achievement and render everyone dependent upon the all-encompassing state, which provides for everyone depending upon the correctness of their political views. When the pope placed a radical criticism of the concept of private property in one of his encyclicals, he veered close to making a Marxist contempt for individual rights part of the Catholic faith. In light of that, it’s hard to see what he was warning the Santa Maria Spirituality Center against. All they would have to do to take on a “Marxist tint” would be to follow the teachings of Pope Francis.