GREAT GAIA: Pope Francis Commands Catholics To ‘Listen To The Voice Of Creation’, Undoes Genesis 1 Saying Man Does Not Have Authority Over Earth 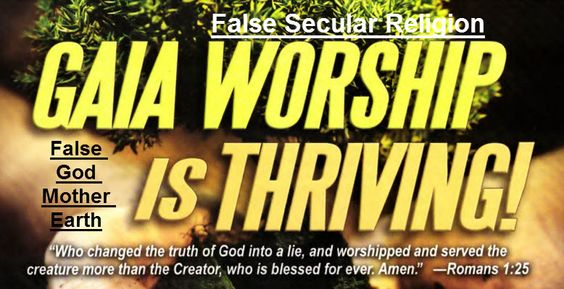 The solution to these problems is learning to “listen to the land,” he states, and to occupy our correct place in the “web of life.” “We also need once more to listen to the land itself,” Pope Francis said. “Today we hear the voice of creation admonishing us to return to our rightful place in the natural created order – to remember that we are part of this interconnected web of life, not its masters. The disintegration of biodiversity, spiraling climate disasters, and unjust impact of the current pandemic on the poor and vulnerable: all these are a wakeup call in the face of our rampant greed and consumption,” he says.

Geoffrey Grider | NTEB – Pope Francis announced a “jubilee for the earth” Tuesday to commemorate the 50th anniversary of Earth Day, calling on all to combat the “climate emergency.” But it’s really just pagan Gaia worship from ancient Babylon.

There is nothing sadder or more tragic, from an eternal perspective, that watching a man who claims to be the ‘vicar of Christ‘ absolutely unable to understand even the most basic parts of the bible given to us by Jesus Christ. You claim to be standing in the place of Jesus here on earth, yet you are ignorant of bible truth and doctrine. Truly an amazing spectacle to behold.

Genesis 1:26-27 “And God said, Let us make man in our image, after our likeness: and let them have dominion over the fish of the sea, and over the fowl of the air, and over the cattle, and over all the earth, and over every creeping thing that creepeth upon the earth. So God created man in his own image, in the image of God created he him; male and female created he them.”

Romans 1:25 “Who changed the truth of God into a lie, and worshipped and served the creature more than the Creator, who is blessed for ever. Amen.”

Clearly Genesis 1, the starting point of the Holy Bible, shows us a number of basic bible truths we need to consider. Truths like the fact that God made man and woman, 2 genders and 2 genders only, so Pope Francis strikes out even on that point as he says that ‘transgender women are female‘. Strike #2 for Pope Francis is when he says that man does not have dominion and authority over the earth, as he states repeatedly in the article below. Spoken like the Gaia worshipper he truly is.

So we wonder, is Pope Francis really so ignorant of basic bible truths, or, does he know what the bible teaches and that’s why he works so hard to destroy it? Pope Francis promotes the ancient religion of Egypt and Babylon known as Gaia, which is a worshipping of the creation and something that is clearly forbidden in Romans 1. So no, Frankie, I will not be “taking my place” alongside the earth, I have been born again in the likeness and image of God almighty. The earth you worship so much is slated to be set on fire and blown to smithereens. Gaia worship is just another of the endless variations of God-rejecting paganism that will burn up when all is said and done.

2 Peter 3:10 “But the day of the Lord will come as a thief in the night; in the which the heavens shall pass away with a great noise, and the elements shall melt with fervent heat, the earth also and the works that are therein shall be burned up.”

Pope Francis wants you to get in line behind the creation, as if you were nothing different from the rocks and trees, and bow down before the ‘mother goddess’ of Gaia. The Roman Catholic church has long worshipped the feminine deity figures from Babylon and Egypt. The ‘blessed virgin‘ of Roman Catholicism is another example of that, and she has almost nothing in common with the biblical Mary. There’s no hope in the pope, get out while you still can.

FROM BREITBART NEWS: In his message for the World Day of Prayer for the Care of Creation, the pontiff has called for repentance, insisting we have “broken the bonds of our relationship with the Creator, with our fellow human beings, and with the rest of creation.”

“Our constant demand for growth and an endless cycle of production and consumption are exhausting the natural world,” the pope laments. “Forests are leached, topsoil erodes, fields fail, deserts advance, seas acidify and storms intensify. Creation is groaning!” he concludes.

The solution to these problems is learning to “listen to the land,” he states, and to occupy our correct place in the “web of life.”

“We also need once more to listen to the land itself,” Francis said. “Today we hear the voice of creation admonishing us to return to our rightful place in the natural created order – to remember that we are part of this interconnected web of life, not its masters. The disintegration of biodiversity, spiraling climate disasters, and unjust impact of the current pandemic on the poor and vulnerable: all these are a wakeup call in the face of our rampant greed and consumption,” he says.

The pope urges all to adopt a simpler, more austere lifestyle.

“We must examine our habits of energy usage, consumption, transportation, and diet,” he states. “We must eliminate the superfluous and destructive aspects of our economies, and nurture life-giving ways to trade, produce, and transport goods.”

More controversially, Francis calls for “restorative justice” to compensate for the “enormous ecological debt” incurred in the “historic exploitation of the global South.”

“We should not forget the historic exploitation of the global South that has created an enormous ecological debt, due mainly to resource plundering and excessive use of common environmental space for waste disposal,” he writes. “It is a time for restorative justice. In this context, I repeat my call for the cancellation of the debt of the most vulnerable countries, in recognition of the severe impacts of the medical, social and economic crises they face as a result of Covid-19.”

In his message, the pope reiterates his belief that “we are in the midst of a climate emergency” and therefore “climate restoration is of utmost importance.”

“We are running out of time, as our children and young people have reminded us,” he declares. “We need to do everything in our capacity to limit global average temperature rise under the threshold of 1.5°C enshrined in the Paris Climate Agreement, for going beyond that will prove catastrophic.”

With the commemoration of the World Day of Prayer for the Care of Creation, the pope also launched an extended “Season of Creation,” which will continue until the feast of Saint Francis of Assisi on the fourth of October. READ MORE

False Prophet claims Mother Nature, Gaia, is “having a fit”