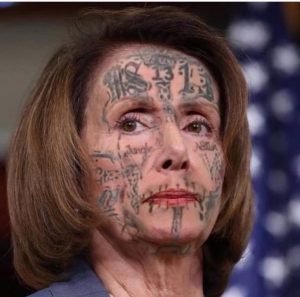 First of all, I seriously doubt that the Wicked Witch of the West (who has been installed for decades to represent the Sodomy State) ever darkens the door of a Synagogue of Satan to take their version of Holy Communion!!

See More on that below.

Nasty Nancy Pelosi, and other corrupt Catholics, should be force-fed the Eucharist, because it will speed up their Sickness and Damnation. The Catholic way of Communion is an ABOMINATION!

Here is the news about the Old Jezebel!

“You are not to present yourself for Holy Communion and, should you do so, you are not to be admitted to Holy Communion, until such time as you publicly repudiate your advocacy for the legitimacy of abortion and confess and receive absolution of this grave sin in the sacrament of Penance.”

I doubt that most people, that includes Protestants, have ever read the scripture and properly discerned what Communion is…, and how to PROPERLY take it! I posted this SAME info about Demented Joe Biden when they wanted to deny him communion!

Oh and Nasty Nancy is a Practicing Witch if you did not know!!!

Read what the scripture says; 1st Corinthians 11:27-32 “Wherefore whosoever shall eat this bread, and drink this cup of the Lord (take communion), unworthily, (not being Born Again and having your FAITH exclusively in Jesus Christ and NOTHING else) shall be guilty of the body and blood of the Lord. (will be judged harshly) 28 But let a man examine himself (see if there is any confessed sin or if your faith is some where else), and so let him eat of that bread, and drink of that cup. 29 For he that eateth and drinketh unworthily, eateth and drinketh damnation to himself, not discerning the Lord’s body. (what he did for you on the Cross) 30 For this cause many are weak and sickly among you, and many sleep (die prematurely). 31 For if we would judge ourselves, we should not be judged. 32 But when we are judged, we are chastened of the Lord, that we should not be condemned with the world.”

One might want to see what “Chastened of the Lord” and exactly who are ours Brothers and Sisters are also.

The above Scriptures are of immense significance to every Believer, and should be minutely understood. In fact, not properly understanding them causes many Christians to be sick, even “many” to die prematurely. They don’t lose their soul, but their lives are cut short, which is extremely detrimental, not only to families, but also to the Work of God.

So what is the Holy Spirit through Paul saying here?

1. First of all, even though we aren’t told how often we should partake of the Lord’s Supper, the Holy Spirit does say, “As often as you eat this bread, and drink this cup,” specifying something significant. What is so significant is that we understand that the Lord’s Supper is meant to portray “the Lord’s death till He come.” This refers not only to the fact of His Death, but also to the manner in which He died. We are ever to keep the Cross before us.

2. It is possible, and said so by the Holy Spirit, to eat the bread and drink the cup of the Lord, “unworthily.” When that happens, we become “guilty of the Body and Blood of the Lord.”

What does that mean?

The Lord does not demand sinless perfection for one to partake of the “Supper.” However, He does demand that our Faith be exclusively in Christ and the Cross, as evidenced in Verse 26. If we make anything else the object of our faith, we are eating and drinking unworthily, and the results will not be good. This is, in fact, the reason that so many Christians are sick, even the reason why many Christians die prematurely.
Understanding that, I’m sure we see how important all of this actually is.

3. Before taking the “Supper,” every Believer should “examine himself” as to whether his faith is properly placed in Christ and the Cross. The idea is this:

If anyone has it in their mind that belonging to a certain Church or Denomination denotes some type of spirituality, then their faith is not properly placed in Christ and the Cross. If one believes that Salvation comes in any manner except by simple Faith in Christ and the Cross, then that person is “guilty of the Body and Blood of the Lord.” That person had best not partake of the “Supper.”

4. If a Believer eats and drinks unworthily, which means their faith is placed in something other than Christ and the Cross, such a Believer is actually “eating and drinking damnation to himself,” because he is “not discerning the Lord’s Body.”

We “discern the Lord’s Body” by understanding what the broken bread means and what the cup means. They refer, respectively, to His broken Body and His shed Blood, which both refer to the Cross.

There will be millions of Christians this Sunday morning who will take the Lord’s Supper, whose faith is not properly placed in Christ and the Cross, but something else altogether. If they are true Believers, such action will cause many to be sick, and even to die prematurely. These misfortunes may be ascribed to something else, but if the truth be known, they occurred because of “not discerning the Lord’s Body.”

Simple Faith in Christ and what He did at the Cross addresses this perfectly and stops the sickness and the premature death.

It’s obvious we should realize how important all of this actually is.

So perhaps that is why Nasty Nancy Pelosi, and other Communists, have one foot in the grave. They are devote Catholics and are taking Communion in an UN-WORTHY MANNER!

1st Corinthians 2:14-16 “But the natural man receiveth not the things of the Spirit of God: for they are foolishness unto him: neither can he know them, because they are spiritually discerned.15 But he that is spiritual judgeth all things, yet he himself is judged of no man.16 For who hath known the mind of the Lord, that he may instruct him? But we have the mind of Christ.”