On Earth Day 2020, Pope Francis Cries That ‘We Have Sinned’ Against Mother Nature And She Will ‘Not Forgive Our Trespasses’ Against The Great Gaia

“We see these natural tragedies, which are the Earth’s response to our maltreatment,” Pope Francis said. “I think that if I ask the Lord now what he thinks about this, I don’t think he would say it is a very good thing. It is we who have ruined the work of God.” Saying the Earth was not an endless deposit of resources to exploit, he said: “We have sinned against the Earth, against our neighbor and, in the end, against the creator.” 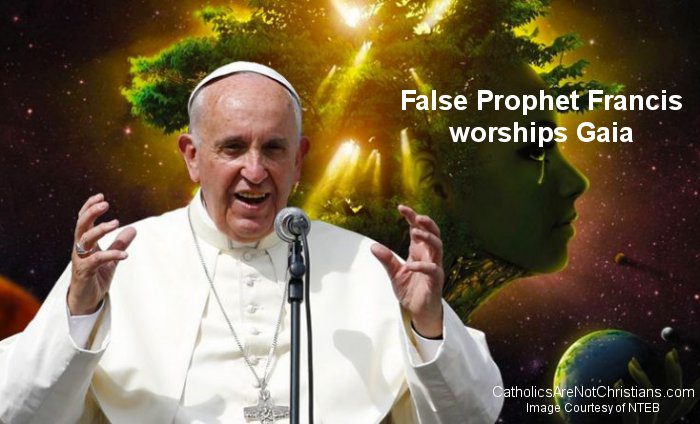 Geoffrey Grider | NTEB – Pope Francis made an impassioned plea for protection of the environment on Wednesday’s 50th anniversary of the first Earth Day, saying the coronavirus pandemic had shown that some challenges had to be met with a global response.

Back in October of 2019, Pope Francis published a book called ‘Our Mother Earth‘ in which he made the case, as he does today, that we have sinned against our Mother Earth, and we need to do penance and seek her forgiveness and blessing. Catholics listen to this New Age Earth Day drivel, and lap it up obediently as coming from the mouth of God Himself. When we open the bible, we see God has a very, very different view on who our ‘mother’ is and what is the state of the earth. Here is what God thinks of Earth Day.

“But Jerusalem which is above is free, which is the mother of us all.” Galatians 4:26

“But the day of the Lord will come as a thief in the night; in the which the heavens shall pass away with a great noise, and the elements shall melt with fervent heat, the earth also and the works that are therein shall be burned up. Seeing then that all these things shall be dissolved, what manner of persons ought ye to be in all holy conversation and godliness, Looking for and hasting unto the coming of the day of God, wherein the heavens being on fire shall be dissolved, and the elements shall melt with fervent heat?” 2nd Peter 3:10-12

Did you catch that verse on who our real ‘mother’ actually is? It is not Mary, and it’s not the earth on Earth Day, it is the heavenly  New Jerusalem from Revelation 21, our John 14 ‘mansions’ that Jesus has been preparing for us for the past 2,000 years. That’s your mother, from God’s perspective. Your Earth Day mother is a tragic fraud.

If the earth is your mother, then the God of the bible is absolutely not your Father, because you’ve put His creation on a par with the Creator, and that’s idol worship, plain and simple. I do not answer to the earth, I do not speak to the earth, and I certainly do not ask forgiveness from the earth. I want clean air, clean water, clean food and we recycle in our household, but that’s as far as it goes. Watching Pope Francis bowing to the ‘Blessed Mother Mary‘ while calling us to ‘seek forgiveness’ from ‘Mother Earth’ is a revolting and disgusting display of New Age paganism and Gaia worship. That’s something that lost people do. If that’s you, it highly likely you’re lost and headed for Hell. You don’t have to go, here’s your way out.

On Earth Day, Pope Francis Says Nature Will Not Forgive Our Trespasses

FROM REUTERS: Pope Francis praised the environmental movement on Earth Day 2020, saying it was necessary for young people to “take to the streets to teach us what is obvious, that is, that there will be no future for us if we destroy the environment that sustains us”.

Pope Francis, who wrote a major encyclical in 2015 on the defence of nature and the dangers of climate change, dedicated his general audience – broadcast from his library because of the coronavirus lockdown – to the theme. Recounting a Spanish proverb that God always forgives, man sometimes forgives but nature never forgives, Francis said: “If we have deteriorated the Earth, the response will be very ugly.”

“I sincerely hope for growth in awareness and true repentance on the part of us all, men and women of the 21st century, believers or not, and on the part of our societies, for allowing ourselves to be carried away by logics that divide, create hunger, isolate and condemn. It would be good to ask the poor

A landmark in the emergence of the environmental movement when it first took place in 1970, this year’s Earth Day has prompted calls from many, including U.N. Secretary-General Antonio Guterres, for governments to pursue “green recovery” in response to coronavirus

Both Pope Francis and Guterres have made environmental protection and climate change signature themes of their offices.

“We see these natural tragedies, which are the Earth’s response to our maltreatment,” Francis said. “I think that if I ask the Lord now what he thinks about this, I don’t think he would say it is a very good thing. It is we who have ruined the work of God.”

Saying the Earth was not an endless deposit of resources to exploit, he said: “We have sinned against the Earth, against our neighbour and, in the end, against the creator.”

Last year, after a synod of bishops from the Amazon region, Francis said he was considering adding a definition of “ecological sins” in the Roman Catholic Church’s Catechism, a compendium of teachings and rules.

Pope Francis, like Guterres, has likened the response to environmental dangers to that of the coronavirus. “Only together, and looking after the most fragile members of society can we win global challenges,” the pope said.

So far, massive economic stimulus packages launched by the United States, China and European governments have focused mainly on staunching the damage to existing industries and staving off the threat of a global depression. READ MORE