Galatians 3:1 “O foolish Galatians, (CATHOLICS) who hath bewitched you, that ye should not obey the truth, before whose eyes Jesus Christ hath been evidently set forth, crucified among you?”

“ Mary, the Immaculate Virgin of Nazareth, through her free and feminine ‘Yes,’ consented to the conception of [the] Divine Word in her womb by the power of the Holy Spirit, and thus mediated the ‘one mediator’ (1 Timothy 2:5) to the world, bringing salvation to the human race.”

So begins “The Role of Mary in Redemption,” a document of the Theological Commission of the International Marian Association (IMA) requesting that Pope Francis publicly acknowledge and honor Mary, the Mother of Jesus, as the “Co-Redemptrix with Jesus the Redeemer.”

This isn’t the first time the title has been used to describe Mary — St. John Paul II referred to her as “Co-Redemptrix” more than once. Nor is it the first time a request has been made for a papal statement on Marian co-redemption.

But this may be the ideal time for such a papal statement, says Robert Fastiggi, a professor of systematic theology at Detroit’s Sacred Heart Major Seminary and a member of IMA’s Theological Commission.

“I really think a papal statement on Marian co-redemption would be opportune during the centenary of the Fatima apparitions,” Fastiggi told the Register.

In fact, the document itself describes the Marian apparitions at Fatima as “a powerful manifestation of Our Lady’s co-redemption in action.” Do NOT read the rest of this Idiocy here!

Galatians 1:6-9 “I marvel that ye are so soon removed from him that called you into the grace of Christ unto another gospel:7 Which is not another; but there be some that trouble you, and would pervert the gospel of Christ.8 But though we, or an angel from heaven, preach any other gospel unto you than that which we have preached unto you, let him be accursed.9 As we said before, so say I now again, If any man preach any other gospel unto you than that ye have received, let him be accursed.”!!!!!

Is Mary the co-redemptrix / mediatrix? 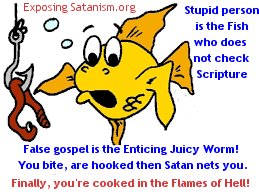 Absolutely NOT! It is a ploy of Lucifer who has introduced “another gospel” and millions are swallowing the deception hook, line, and sinker!!!!

Some Catholics view Mary as a co-redemptrix or a mediatrix who plays a key role in the salvation of mankind. (The suffix -trix is a feminine word ending in Latin, so a redemptrix is a female redeemer, and a mediatrix is a female mediator.) Within Catholicism, there is a drive to define a new Marian dogma in which Catholics, as a matter of faith, would be obliged to accept these three doctrines: (1) Mary participates in redemption with Jesus Christ, (2) grace is granted by Jesus only through the intercession of Mary, and (3) all prayers from the faithful must flow through Mary, who brings them to the attention of her Son. This movement would, in practice, redefine the Trinity as a kind of Quartet.

The belief in Mary as a co-redemptrix would be in addition to current Catholic teaching on Mary, which states that Mary was a virgin perpetually, that she never had intercourse with her husband, Joseph; that she never had children other than Jesus; and that she was sinless and ascended into heaven. These teachings are more than unscriptural; Scripture directly refutes them.

The idea that Mary is a co-redemptrix or mediatrix contradicts 1 Timothy 2:5, which says, “For there is one God and one mediator between God and mankind, the man Christ Jesus.” Jesus is the Mediator. There is no mediator between man and Jesus. Jesus Himself dwells in believers; thus, none is required (Colossians 1:27).

Jesus is the perfect and sole Mediator between man and God because He is the sinless Son of God. Mary was not sinless. There is no Scripture whatsoever to back the claim of Mary’s sinlessness or of her assumption into heaven. This dogma was accepted as a result of papal proclamation. In the biblical narratives, Mary is pictured as a humble and submissive young woman, faithful to God, grasping the implications of what is about to happen to her, and uttering praises and doxologies (Luke 1:46–55). In fact, in her Magnificat, Mary says, “My spirit rejoices in God my Savior” (verse 47). The clear implication of Mary’s calling God her “Savior” is that she recognized her need of salvation. Just like the rest of us, Mary needed a Savior, a Redeemer.

Jesus Himself indicated that Mary holds no special place relative to redemption or mediation. In Matthew 12:47–50, Mary and her other sons were trying to see Jesus while He was teaching. “Someone told him, ‘Your mother and brothers are standing outside, wanting to speak to you.’ He replied to him, ‘Who is my mother, and who are my brothers?’ Pointing to his disciples, he said, ‘Here are my mother and my brothers. For whoever does the will of my Father in heaven is my brother and sister and mother.’”

Later, at the foot of the cross, Mary is a grief-stricken mother. She did not suffer for mankind as a whole; she clearly suffered her own pain and mourning. She is one of the people receiving salvation from Jesus, not a contributor to His work. She is anguished and must be cared for by the apostle John.

After Jesus’ death and resurrection, Mary was part of the community of believers continuing in prayer and supplication prior to Pentecost (Acts 1:14). Mary is “most blessed among women” (Luke 1:42) because she was the mother of the Messiah. But she is not divine and cannot be seen as part of the Trinity. She did not redeem us from sin and cannot be made part of the redemptive process.