Why not! But it might be hard to tell the difference between a Robot Preacher and the Zombie Apostates that Currently fill MOST of the Pulpits around the World. 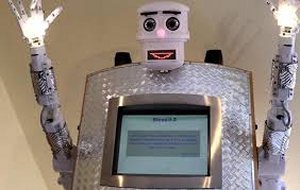 Cynthia Pawl edited and added to these writings.

BlessU-2 a robot designed to replace a preacher of the True Gospel and gives blessings in five languages.

Popular Mechanics calls it a “holy robot” and their title states: “BlessU-2 Is a Robot Priest That Will Forgive Your Sins“

According to Archbishop Cranmer “BlessU-2: a robot priest and the parable of technological emptiness” “Bless me, Robot, for I have sinned.” “Do you want to receive absolution in a male voice or a female voice?”

The penitent presses a button on a touchscreen torso, and BlessU-2 (as it is named) raises its arms, its hands light up, and the blessing is spoken (or printed, if you prefer) with a bit of eyebrow action. BlessU-2 can honor, laud and magnify in English, German, French, Spanish or Polish… Source.

Sub title from the Sun suggests that the robot MAY be anointed by God! “No time for mass? This bizarre robo-priest in Germany offers a selection of words inspired by God – and can even print you off a receipt” Yes, the WORDS of GOD are anointed, because they are scripture. However, that does not mean the person, or robot in this case, is anointed. Nor does he/it have the power or authority to forgive sins. That is a power solely ascribed to GOD. NO Man or Robot has such authority. Especially not a Catholic priest who is appointed by MAN and not God. “and can even print out a receipt”?

A receipt, so this blessing comes at a price? Or, is this really meant to be a printout? Written evidence of the blessing received. Like the fortune in a fortune cookie?

You can bet you will never hear any warnings of the price of Sin or the torments of Hell coming out of this Robot Preacher. I doubt it will admonish lost souls to repent and be Born Again or inform them that there is no other way to God but through the shed blood of the Risen Savior. If it preaches anything at all, it will likely be twisted rhetoric of the Catholic Church, or the feel good Seeker Sensitive Social gospel spewed by the likes of Rick Warren and Joel Osteen. It may promote the Word of Faith Prosperity gospel that is pimped from the platforms of the Trinity Broadcasting Network (TBN) and DayStar. You mark my words, these soulless mechanical prophets will soon be in the foyers of mega churches and the lines will be long as stupid sheeple insert a debit or credit card selecting the LEVEL of blessings they desire. It IS inevitable!

Some questions one needs to ask:

Can a machine bestow a blessing? Is there a difference between scripture quoted by a soulless robot and scripted words proclaimed by a cleric who is nothing more than a trained monkey? Is it required that a blessing be bestowed by a human? Does that human need to be of a right spirit? Is a spirit required at all? Does a wrong spirit negate the blessing? Do the blessings found in the Word of God have life regardless? Can Artificial Intelligence (AI) actually help the failing church connect with the technically engrossed generation? Do we even need to have a confessor/intermediary, man or machine? Does our drive thru society demand a checkout machine minister? Would this robot priest really address the issue that is causing the church to fail. Or will it just compound the problem or even destroy the church altogether?

I can assure you that a SPIRIT is definitely required. A Holy and Righteous SPIRIT! The Spirit of the LORD. “For where the Spirit of the Lord is, THERE is liberty!” Unless the power of the Spirit of God is working behind the words spoken and the one speaking them, they are POWERLESS.

The saddest and most offensive aspect of this invention is that it is totally contrary to the nature of blessing and to the very heart of God. The whole message of the Gospel and even of the Ten Commandments is RELATIONSHIP/LOVE. It is all about having right relationship/right standing with GOD and our fellow man. This technology driven society is becoming totally dehumanized and disconnected from the one source that can truly meet all of their needs.

What really is the point, anyway? If society wants to be free of GOD. If Science is bent on convincing us that GOD does not exist, what reason would you have to seek a blessing? A blessing from whom? For what? If you don’t even believe in sin or the punishment for it, why would you need to be absolved?

BlessU-2 seems to be attracting lots of people. Church spokesman Sebastian von Gehren told The Mirror “People who have little in common with the church are particularly attracted to the robot, with many people “now coming every morning and evening”. The robot has met with mixed reaction, with many churchgoers saying “they cannot imagine a blessing from a machine”. Source

I am sure there are multiple reasons for visiting the Robot Priest. Some are just curious as with any new, cutting edge robotic. They just want to experience the latest and greatest. Some just want to be entertained. Anything to break the dull drums of their existence. Some are just grasping for anything that might address the dilemma of a society that is plagued by emptiness, superficiality, banality and destructiveness. But, the answers they are seeking will never be found in Science or Technology. The only answer is to get right with GOD and with our fellow man. We don’t need to become transhuman, we need to become truly human. We need to get back to our beginnings. The future is worthless if we turn our back on our roots and Our Creator.

Jeremiah 6:16-19 “Thus saith the LORD, Stand ye in the ways, and see, and ask for the old paths, where is the good way, and walk therein, and ye shall find rest for your souls. But they said, We will not walk therein.17 Also I set watchmen over you, saying, Hearken to the sound of the trumpet. But they said, We will not hearken.18 Therefore hear, ye nations, and know, O congregation, what is among them.19 Hear, O earth: behold, I will bring evil upon this people, even the fruit of their thoughts, because they have not hearkened unto my words, nor to my law, but rejected it.

What is a blessing according to the Bible? Please pause here for a moment and read this explanation of Bless and Blessings. Click Here.

What does it mean to be blessed and what are the results of being blessed?

The majority of people believe that if you have money, a big house, a fancy car, the latest fashions, gold and silver hanging everywhere on your body, you are blessed by God. Wrong. Simply not so. In fact it is just the opposite. The acquisition of things does NOT mean you are blessed, at least not blessed by the one and only TRUE GOD of the Bible. Yes, there are those God the Father chooses to prosper financially. They are privileged to be vessels He uses to move money through because they can be trusted. Material Possessions and High Positions are not evidence of God’s blessing. In fact, you can have next to nothing and be a thousand (1000) times more blessed the richest person on the planet. Source: Blessings and Curses. You need to read this ENTIRE writing.

No man can bestow SALVATION on anyone and neither can a robot. All of our blessings come from GOD, not a man! Salvation can only be bestowed by the Heavenly Father and only through the Shed Blood of His ONLY Begotten Son. The whole idea of this Robot Priest is ludicrous and appears to be just more of the idiocy we have witnessed coming out of the Vatican/Roman Catholic Church. This move is being hailed as the next “reformation”. In fact, listen to this video clip you will hear a lot of the same phraseology used by Catholic priests.

“We wanted people to consider if it is possible to be blessed by a machine, or if a human being is needed,” Stephan Krebs of the Protestant church in Hesse and Nassau [….]

“The idea is to provoke debate,” “People from the street are curious, amused and interested. They are really taken with it, and are very positive. But inside the church some people think we want to replace human pastors with machines. Those that are church-oriented are more critical.” Source of Quotes.

[…] Aside from the creepy aesthetic of the robot, the very idea of programming a computer to bless people is itself a searing indictment of the collapse of Christianity in Europe. Stephan Krebs of the Protestant church in Hesse and Nassau, which came up with the robot idea, told The Guardian, “We wanted people to consider if it is possible to be blessed by a machine, or if a human being is needed.”

Given the rapid disappearance of Christianity in Europe, that seems like an odd way to mark the quincentennial of the Reformation. More than odd: it seems like a deliberate attempt to talk about something other than what Christianity is and why Europeans, like all people, desperately need to hear the gospel of Jesus Christ for their eternal salvation.

Secularization Is Killing The Church

Meanwhile, Christianity is disappearing from the European continent. Two years ago, Damian Thompson noted in The Spectator that in the first decade of the twenty-first century, the number of Christians in Britain fell by 5.3 million, or about 10,000 a week. At that rate of decline, he wrote, “the mission of St Augustine to the English, together with that of the Irish saints to the Scots, will come to an end in 2067.” Source: Federalist.com

Continued in Part 2 – This is not the first time that Technology and Religion have been merged.