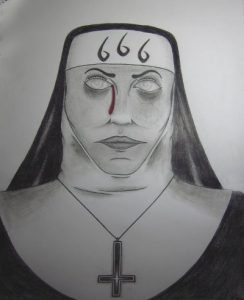 Yahoo News – “Marie” was placed in a French Catholic boarding school for “young girls from good families” when she was in the fifth grade. She remembers a nun who would come to her class every day to choose a student to help her with Mass. But the nun wasn’t looking for someone to help her. She was looking for a victim.

“I was 11 and looked 9. She would choose me once every two or three times,” she recalls. “She would take me to her office, lock the door, and then draw the curtains. After which she would put me on her knees to make me read the gospel according to Saint Paul or another saint, while she squeezed me with one hand to her chest and pulled down my panties with the other hand. We were of course in pleated skirts and not in pants. It terrified me and paralyzed.”

“Marie” couldn’t talk to her devout Catholic parents about the abuse until a friend convinced her to do so. The result, she says, was catastrophic. “You are really a pervert, a vicious liar. How dare you say such things?” her parents told her. In fact, her parents had told the nuns that she was being sent to boarding school because she needed to be tamed. “I was truly [a gift] for this nun… because she knew full well that she did not risk anything.”

The abuse lasted the whole year. At the age of 35, “Marie” told her mother again about the abuse. “My mother blissfully told me that it was impossible for a nun to whom she entrusted her daughter to abuse a girl,” she says. “Female pedophilia exists and unfortunately the media never talk about it.”

“Marie” was certainly not alone. Dozens of other victims of priests, nuns, and Catholic school personnel in France form the basis of a 2,500-page report released Tuesday by a special commission led by Jean-Marc Sauvé. While 80 percent of the victims were young boys between the ages of 10 and 13, many young girls were abused as well, and not only by priests. Nuns used crucifixes to rape little girls or forced boys to have sex with them, too.

The commission spent nearly three years combing through complaints and press reports and interviewing victims going back to the 1950s. Of the 3,000 abusers identified by the commission, two-thirds are priests. They found that priests and nuns alone abused around 216,000 children, but that the number climbs to 330,000 when they counted abuse at the hands of non-clergy who worked in Catholic schools and other institutions. The report only covers minors; the authors, who include scholars, psychologists, and law enforcement officials, say there could be many young men and women over the age of 18 who were also victims.

Their summary is damning, determining that the Catholic Church in France showed “a deep, cruel indifference toward victims.”

Olivier Savignac was another of those victims. He wanted to believe the priest in his home parish in France was a devout man. But when the priest asked him to take off his clothes and lie on the bed in a room at a Catholic summer camp when he was 13 years old, he knew something wasn’t right. “I perceived this priest as someone who was good, a caring person who would not harm me,” said Savignac, who now heads a group for victims of clerical sex abuse. “But it was when I found myself on that bed half-naked and he was touching me that I realized something was wrong.”

Savignac says the abuse, which went on for years, damaged him for life: “It’s like a growing cyst, it’s like gangrene inside the victim’s body and the victim’s psyche.”

Only 22 of the thousands of cases of criminal pedophilia qualify under French law for legal action. More than 40 cases that are past the statutes of limitations have been forwarded to the French Catholic Church in hopes that the perpetrators will be punished. On average, each perpetrator abused 70 children. The president of the French Conference of Bishops, Eric de Moulins-Beaufort, said the church is “appalled” by the report. “I wish on that day to ask for pardon, pardon to each of you,” he told the victims. Pope Francis also expressed “sorrow” over the findings, saying he will pray for those affected. “His first thoughts are with the victims, with great sadness for their wounds,” Francis said in a statement through his press office, adding that he hoped the French church would now “undertake a way of redemption.”

Survivor Francois Devaux, who founded the victims’ group La Parole Liberee, attended the presentation of the report. “You are a disgrace to our humanity,” he said, addressing the church as a whole. “In this hell, there have been abominable mass crimes… but there has been even worse: betrayal of trust, betrayal of morale, betrayal of children.”

Investigation Proves The Catholic Church is a Sanctuary for Perverts and a Synagogue of Satan!