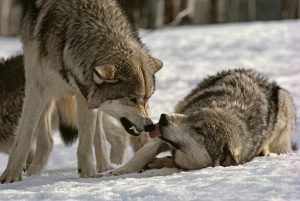 If you have ever seen a Beta male with its tail tucked between its legs, lay down and show its belly in submission to the Alpha male, then you know what this means symbolically!!!

Pope Francis knelt down and kissed the feet of the MUSLIM leaders of South Sudan, begging them to give peace a chance and to be worthy fathers of the nation.

Please note that that just as Judas betrayed Jesus with a Kiss — the pope — this hound of Hell — is rejecting Jesus and embracing the false god of Islam!

Jesus WASHED the Disciples feet. He did NOT Bow to them and KISS their feet!

Jesus washing the feet of the disciples (John 13:1–17) occurred in the upper room, during the Last Supper and has significance in three ways. For Jesus, it was the display of His humility and His servanthood. For the disciples, the washing of their feet was in direct contrast to their heart attitudes at that time. For us, washing feet is symbolic of our role in the body of Christ.

Walking in sandals on the filthy roads of Israel in the first century made it imperative that feet be washed before a communal meal, especially since people reclined at a low table and feet were very much in evidence. When Jesus rose from the table and began to wash the feet of the disciples (John 13:4), He was doing the work of the lowliest of servants. The disciples must have been stunned at this act of humility and condescension, that Christ, their Lord and master, should wash the feet of His disciples, when it was their proper work to have washed His. But when Jesus came to earth the first time, He came not as King and Conqueror, but as the suffering Servant of Isaiah 53. As He revealed in Matthew 20:28, He came “not to be served but to serve, and to give his life as a ransom for many.” The humility expressed by His act with towel and basin foreshadowed His ultimate act of humility and love on the cross.

Jesus’ attitude of servanthood was in direct contrast to that of the disciples, who had recently been arguing among themselves as to which of them was the greatest (Luke 22:24). Since there was no servant present to wash their feet, it would never have occurred to them to wash one another’s feet. When the Lord Himself stooped to this lowly task, they were stunned into silence. To his credit, though, Peter was profoundly uncomfortable with the Lord washing his feet, and, never being at a loss for words, Peter protested, “You shall never wash my feet!”

Then Jesus said something that must have further shocked Peter: “Unless I wash you, you have no part with me” (John 13:8), prompting Peter, whose love for the Savior was genuine, to request a complete washing. Then Jesus explained the true meaning of being washed by Him. Peter had experienced the cleansing of salvation and did not need to be washed again in the spiritual sense. Salvation is a one-time act of justification by faith, but the lifelong process of sanctification is one of washing from the stain of sin we experience as we walk through the world. Peter and the disciples—all except Judas, who never belonged to Christ—needed only this temporal cleansing.

This truth is just one of several from this incident that Christians can apply to their own lives. First, when we come to Christ for the washing of our sins, we can be sure that is permanent and complete. No act can cleanse us further from our sin, as our sin has been exchanged for the perfect righteousness of Christ on the cross (2 Corinthians 5:21). But we do need continual cleansing from the effects of living in the flesh in a sin-cursed world. The continual washing of sanctification is done by the power of the Holy Spirit, who lives within us, through the “washing of water by the Word” (Ephesians 5:26), given to us to equip us for every good work (2 Timothy 3:16–17).

Further, when Jesus washed the disciples’ feet, He told them (and us), “I have given you an example, that you should do as I have done to you” (John 13:15). As His followers, we are to emulate Him, serving one another in lowliness of heart and mind, seeking to build one another up in humility and love. When we seek the preeminence, we displease the Lord who promised that true greatness in His kingdom is attained by those with a servant’s heart (Mark 9:35; 10:44). When we have that servant’s heart, the Lord promised, we will be greatly blessed (John 13:17). Source Got Question

The pope would be more likened to the WOMAN who KISSED  the Feet of Jesus!  Just PROVES this disciple of Lucifer is NOT in anyway shape or form a servant of the God of Scripture!!

Luke 7:38 “And stood at his feet behind him weeping, and began to wash his feet with tears, and did wipe them with the hairs of her head, and kissed his feet, and anointed them with the ointment.”

This shows that the pope is really one of those Beta Males — a“Girlie Man”!