But Records Show Catholic Church was Rotten from the Beginning — and I will add — it continues to ROT and the STINK is Worse than it has EVER been! 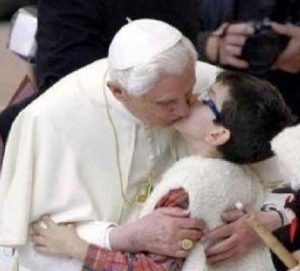 NTEB – Former Pope Benedict’s “The Church and the Scandal of Sexual Abuse” has the unmistakable ring of a papal document. The church’s still-radiating crisis, Benedict suggests, was a product of the moral laxity that swept the West, and not just the church, in the 1960s. The young rebels of 1968, Benedict writes, fought for “all-out sexual freedom, one which no longer conceded any norms.” But this is not even half the truth as you will see.

Former Pope Benedict’s “The Church and the Scandal of Sexual Abuse” has the unmistakable ring of a papal document. You might even call it a post-retirement encyclical. Or damage control.

Former pope why did Benedict XVI retired under highly suspicious circumstances back in 2013, and we have heard precious little from him since then. But this week, he felt the urge to make his voice known once again with the publishing of a new encyclical aimed at trying to stop the bleeding from the ongoing Catholic priest sex abuse scandals. Benedict makes his case that it was the free love era of the hippie generation in the late 1960’s  that was responsible for the catholic priest sex scandals. But as you will see, this is very far from the truth. The free love of the 1960’s only brought an already-simmering and festering boil to the surface.

“Rejoice over her, thou heaven, and ye holy apostles and prophets; for God hath avenged you on her. And a mighty angel took up a stone like a great millstone, and cast it into the sea, saying, Thus with violence shall that great city Babylon be thrown down, and shall be found no more at all. And in her was found the blood of prophets, and of saints, and of all that were slain upon the earth.” Revelation 18:20,21,24 (KJV)

Below you will find former pope Benedict’s claims and the case he makes summarized below. We recommend that you read the full text of his 6,000 word document here. What follows after that is a short history of Catholic sex abuse scandals over the past 1,700 years. We recommend that you read all of that as well. The Catholic Church has always, from its beginnings in the early 300’s, been a haven for homosexuals and pedophiles, and it has been consistently covered up by every generation of bishops, cardinals and popes.

FROM THE NY POST: When Pope Benedict XVI resigned the papacy in 2013, he vowed to live the rest of his days in seclusion, to serve the Catholic Church “through a life dedicated to prayer.” But the church’s spiraling abuse crisis prompted him this week to ­return to the limelight.

The retired pontiff has drafted a 6,000-word document in his native German and aims to publish it in a monthly periodical for clergy in his home region of Bavaria. Benedict says the document, an English translation of which I’ve reviewed, is meant to assist the Church in seeking “a new beginning” and making her “again truly credible as a light among peoples and as a force in service against the powers of ­destruction.”

Former Pope Benedict’s “The Church and the Scandal of Sexual Abuse” has the unmistakable ring of a papal document. You might even call it a post-retirement encyclical. It’s written with his signature precision and clarity of insight and offers a piercing account of the origins of the crisis and a ­vision of the way forward.

The church’s still-radiating crisis, Benedict suggests, was a product of the moral laxity that swept the West, and not just the church, in the 1960s. The young rebels of 1968, Benedict writes, fought for “all-out sexual freedom, one which no longer conceded any norms.”

Benedict adds: “Part of the physiognomy of the Revolution of 1968 was that pedophilia was now also diagnosed as allowed and appropriate.” This might strike contemporary readers as puzzling. But those who lived through that wretched decade will remember that some of the leading ’68ers also advocated “anti-authoritarian education,” which involved some pretty ­unsavory interactions between adults and children. Hippie communes weren’t child-friendly places, either.

“I have always wondered how young people in this situation could approach the priesthood and accept it, with all its ramifications,” Benedict writes. “The extensive collapse of the next generation of priests in those years and the very high number of laicizations were consequence of all these processes.”

The church, in other words, was no more immune to the disorders of that decade and its aftermath than the rest of society.

How come? Benedict blames clerics and theologians who, in the ­aftermath of Vatican II, abandoned natural law — the notion that morality is written into ­human nature itself and can therefore be grasped by human reason — in favor of a more “pragmatic” ­morality. READ MORE

Now For The Rest Of The Story…

A more accurate history of the sexual abuse scandals in the Catholic Church is found here, written by a Catholic priest named Rev. Thomas Doyle, a lettered doctor in Catholic canon law. As you will see, the sex abuse by priests goes all the way back to the beginning of the Catholic Church in the 4th century AD. As with Benedict’s document, we strongly urge you to read this in its entirely as well.

A Short History Of Clergy Sexual Abuse In The Catholic Church

FROM CRUSADE AGAINST CLERGY ABUSE: The Catholic Church was officially recognized by Emperor Constantine in the early 4th century.  With this recognition the religious leaders, soon to be known as the “clergy” gradually evolved into a separate, privileged class, the most exalted members of which were the bishops.  Although celibacy did not become a universally mandated state for clerics of the western Church until the 12th century (2nd Lateran Council, 1139) various church leaders began to advocate it by the 4th century.  The earliest recorded church legislation is from the council of Elvira (Spain, 306 AD).  Half of the canons passed dealt with sexual behavior of one kind or another and included penalties assessed for clerics who committed adultery or fornication.  Though it did not make specific mention of homosexual activities by the clergy, this early Council reflected the church’s official attitude toward same-sex relationships: men who had sex with young boys were deprived of communion even on their deathbed.

In spite of claims to the contrary, the canonical history of the Catholic Church clearly reflects a consistent pattern of awareness that celibate clergy regularly violated their obligations in a variety of ways.  The fact of clergy abuse with members of the same sex, with young people and with women is fully documented.  At certain periods of church history clergy sexual abuse was publicly known and publicly acknowledged by church leaders.  From the late 19th century into the early 21st century the church’s leadership has adopted a position of secrecy and silence.  They have denied the predictability of clergy sexual abuse in one form or another and have claimed that this is a phenomenon new to the post-Vatican II era.  The recently published reports of the Bishops’ National Review Board and John Jay College Survey have confirmed the fact of known clergy sexual abuse since the 1950’s and the church leadership’s consistent mishandling of individual cases.

The bishops have, at various times, claimed that they were unaware of the serious nature of clergy sexual abuse and unaware of the impact on victims.  This claim is easily offset by the historical evidence.  Through the centuries the church has repeatedly condemned clergy sexual abuse, particularly same-sex abuse.  The very texts of many of the laws and official statements show that this form of sexual activity was considered harmful to the victims, to society and to the Catholic community.  Church leaders may not have been aware of the scientific nature of the different sexual disorders nor the clinical descriptions of the emotional and psychological impact on victims, but they cannot claim ignorance of the fact that such behavior was destructive in effect and criminal in nature.

The Protestant Reformation of the 16th century was sustained by much more than the controversy over the sale of indulgences.  Luther and the other major reformers such as Zwingli and Calvin, all rejected mandatory celibacy.   The rejection was motivated in great part by what the reformers saw as widespread evidence that clerics of all ranks commonly violated the obligations with women, men and young boys.  In reference to life in the monasteries on the eve of the 16th century Protestant Reformation, Abbott says that the monks’ “lapses” with women, handsome boys and each other…became so commonplace that they could not be considered lapses but ways of life for entire communities.”   Up to this time the Church’s leaders continued to advocate the long-standing remedies of legislation, spiritual penalties, physical penalties and warnings, none of which worked.  Living in the midst of a clerical world of non-celibate behavior, the reformers believed that this supposedly celibate world caused moral corruption: The sexual habits of the Roman Catholic clergy, according to reformers, were a sewer of iniquity, a scandal to the laity, and a threat of damnation to the clergy themselves.

In spring, 2003 the American media drew attention to an obscure Vatican document issued in 1962 which prescribed special procedures for processing cases of an especially vile form of clergy sexual abuse: solicitation of sex in the confessional.  The Pope and various regional bishops issued a series of disciplinary laws against solicitation, beginning in 1561 and extending to 2001.  Papal laws were promulgated in 1561, 1622, 1741, 1917, 1962, 1983 and 2001.  In addition to the legislation itself, the church courts prosecuted individual cases in great numbers.  The most complete records have been found in the Spanish and Mexican tribunals and reveal a shockingly high volume of complaints from women and men, accusing priests of solicitation and sexual abuse in a variety of forms.  The most complete study of cases from the Spanish tribunals revealed that between 1723 and 1820 3775 cases were completed and sentences handed down.   The author concluded that this number represents a small portion of the actual cases in that it reflects only those completed and not the total number started and later abandoned. READ THE FULL DOCUMENT HERE