Psalms 34:17-19 “The righteous cry, and the LORD heareth, and delivereth them out of all their troubles. 18 The LORD is nigh unto them that are of a broken heart; and saveth such as be of a contrite spirit. 19 Many are the afflictions of the righteous: but the LORD delivereth him out of them all.”

Just shows the Idiot does not know scripture! Just like Satan, the Pope speaks the lies and falsehoods. It is TRUE CHRISTIANS that are sad, especially for those like the Pope who are doomed to Hell. WE understand and grieve for their lost souls. If you are happy all the time, have everything, have no trials and tribulations, then YOU are NOT a child of God! See many scriptures about feeling Sad in the Real Word of God

All Scripture that deals with sadness in the Word of God always has the solution to happiness. That is a personal relationship with the Lord Jesus Christ with the Pope says is dangerous! Pope Francis says it is Dangerous and Harmful to have a Personal Relationship with Jesus Christ 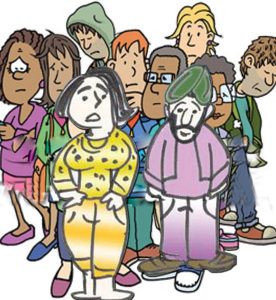 News Punch – The original Christians did not moan and complain, Pope Francis declared on Saturday, because “sad people are not Christians.”

“We think of the first Christians, who had everyone against them, who were persecuted and yet they didn’t complain about the world,” the pope told participants in an international conference on evangelization.

“Reading the New Testament, we see that they were not concerned with defending themselves against an empire that put them to death, but with announcing Jesus, even at the cost of their lives,” he said.

Breitbart.com reports: The pontiff also had strong words against defeatism and pessimism, urging his hearers to be joyful in witnessing to Christ.

“So let us not be saddened by the things that are not going well, by fatigues, by misunderstandings, by gossip, no. These are little things in the face of ‘the surpassing worth of knowing Christ Jesus my Lord,’” he said, quoting Saint Paul’s Letter to the Philippians.

“Let us not be infected by the defeatism that sees everything as going badly,” he continued. “This is not the thought of God. Sad people are not Christians.”

“The Christian suffers many times, but does not fall into a profound sadness of the soul. Sadness is not a Christian virtue. Sorrow is,” he proposed.

The pope told his hearers to turn to God in prayer in order to keep their spirits up when they are tempted by discouragement.

“In order not to let ourselves be robbed of the enthusiasm of the Gospel, let us invoke the author, the Holy Spirit, the Spirit of joy who keeps the missionary ardor alive, who makes life into a love story with God, who invites us to attract the world only with love, and to discover that we only have life by giving it away,” he said.