Selma priest removed from church over photos and accusations of sex, drugs, and weapons 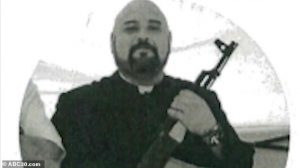 FRESNO, Calif. (KFSN) — A Catholic priest with a past got removed from his church in Selma this weekend over a story of sex, drugs, and weapons.

“You don’t expect a priest to be packed, to have those type of weapons,” said legal analyst Ralph Torres.

The Roman Catholic Diocese of Fresno got a restraining order to protect church employees — all the way up to Bishop Joseph Brennan — from one of their own priests.

Father Guadalupe Rios still has his name on the church marquee at St. Joseph’s Church in Selma, but the man himself is not allowed within 100 yards of the property.

Several parishioners told us they knew Rios was either in a gang or affiliated with one, as the diocese mentioned in their application for a restraining order against him.

Parishioners have also seen social media photos of Rios with an AK-47 or an AR-556 or a .357 Magnum.

So they were afraid to be interviewed.

“The fact that he is having photographs published like that, to me, would be a little disturbing and certainly something you would think the bishop would’ve nipped in the bud,” said Melanie Sakoda, a survivor support specialist for the Survivors Network of those Abused by Priests.

We asked Sakoda to weigh in because the the diocese also accused Rios of physically and emotionally abusing the church secretary who said she had a physical and romantic relationship with Rios for five years.

“You have a double pressure there,” Sakoda said. “Not only is he a priest, but he’s your employer, you know? You’re job’s dependent on him. So, I think it’s very easy for someone to be sexually abused in that situation.”

She said studies have shown fewer than 10% of priests will abuse children, but somewhere around half of them will break their vows of celibacy.

Action News also found court records showing Rios was convicted of a 2016 DUI with a blood alcohol content of .19 — more than twice the legal limit for drivers.

In her declaration in support of the restraining order, the church secretary said he was habitually under the influence of marijuana and alcohol, which would make him suicidal.

In February, he even pointed his gun at her and threatened them both.

“Mr. Rios and I were in his Rectory when he put a gun to his head in front of me,” she wrote in her declaration. “As I started to cry in shock, I asked him what he was doing and he said to me. ‘Either I’m going to die or you are or we both are.’ Due to his past as a gang member and the gangster friends he hangs out with, I’m afraid for my safety and for my family. His guns are accessible and since he threatened me before with killing me, I’m afraid when he finds out about the Diocese knowing the truth about him, he would come after me in retaliation against me.”

The restraining order doesn’t say when the diocese found out about the troubling incidents, but they gave us this statement:

“The Diocese of Fresno feels this matter is a difficult one for all concerned parties, but one that had to be addressed in a timely and forthright manner due to the issues that were brought to the attention of the Diocese of Fresno.

This matter does not concern misconduct or sexual abuse of a minor. Due to the sensitivity of these matters we do not feel it is appropriate to comment further other than that which is already stated by those parties protected in the court documents.”

A judge approved their restraining order Friday, protecting the church itself and the diocese office, as well as the church secretary, her daughters, the church bookkeeper, Bishop Brennan, and another of Father Rios’ supervisors.

The diocese served Rios with the order at its offices, and Selma police seized both of his weapons from church grounds – an AR-556 and a .357 Magnum.  Read More Here