Pope Francis Ultimate Goal Is A World Church Supporting World Government And A World Economy – An All-Inclusive Global Church Is Not Going Back To The Bible But Back To Bondage! 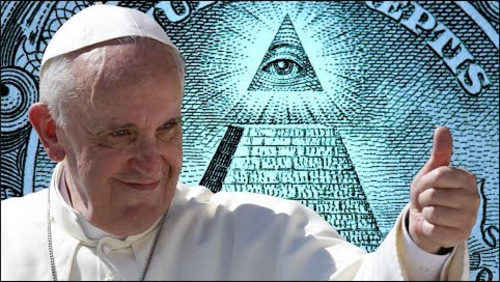 By Don Boys, Ph.D. for All News Pipeline

The Roman Catholic Church in recent days has been rocked, shocked, and mocked by the irresponsible comments of Pope Francis. It may be that the impact is as profound as in 1378 when there were two “legitimate” competing popes, one in Rome and one in Avignon, France. Known as the Western Schism, the split lasted from 1378 to 1417 when two men claimed to be the true Pope and in 1410, there were three contenders for the title!

Each of the three Popes excommunicated the others.

The Church managed to survive that fiasco, the Crusades, the Inquisition, and the Reformation, but will it survive the global sex scandal and the machinations of Pope Francis?

In recent days, it was revealed that Francis has been up to some hanky-panky when it was discovered that he “liked” a seminude model’s picture on Instagram. The Vatican announced today that it has launched a probe into the nudie caper.

It seems the Pope keeps stepping in it almost weekly. Maybe he believes any publicity is good publicity.

Many Roman Catholics think Pope Francis is a loose cannon that has broken away from its mounting and constitutes a danger to the whole Church as it shoots in all directions. Headlines in the Daily Mail blared, “Vatican at War!” Even cardinals are running away from his latest folly. His latest shot was an endorsement of civil marriages for the LGBTQ crowd, thinking that such action would help him win a global popularity contest.

And stop the bleeding of members and money or, more crudely, nickels, and noses.

The Pope’s goal is to bring us all together in an attempt to undo the sixteenth-century Reformation and have a world church supporting a world government and world economy.

Was the Reformation a mistake, or was it one of the most significant events in world history?

Most educated people don’t have a firm grasp on the world’s religious, political, economic, and social conditions in the Middle Ages. Nor do they know what has been the dream, some say nightmare, of globalists—a united worldwide church. After all, who will disagree with everyone getting along? Of course, no one will, but there is much difference in getting along with people and uniting with those with whom you have vast differences.

The Roman Catholic Church (RCC) has always considered Protestants as “separated brethren” even though the Roman Church declared for hundreds of years that there was no salvation outside the RCC. They always invite non-Catholics back into the fold with the understanding that the Vatican will still run things, and their peculiar doctrines and practices will prevail. Catholic officials are willing to overlook minor theological disputes and ignore them as a condition of bringing the breakaway denominations “back home.”

As long as they bring their checkbooks and don’t try to run things.

Get ready, folks, the world church is being formed with headquarters in Rome, but here is one Bible-believer who will never “return to Rome” since my crowd was never in her! Independent churches were publicly baptizing converts in huge tubs throughout Germany, Switzerland, and other European nations long before the Reformation. I will stay independent (as were all original churches) as a hog on ice and free as an eagle until shrimp learn to whistle and pigs learn to fly.

An all-inclusive, world church is not going back to the Bible but back to bondage! 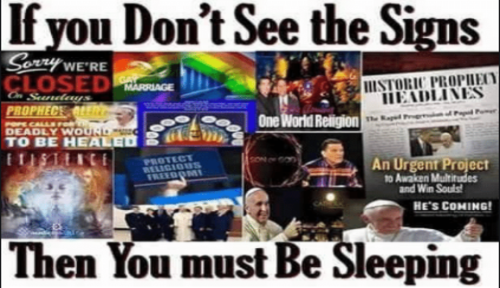 According to LifeSiteNews of August 22, 2019, a multi-faith committee was announced “to implement the ‘Human Fraternity’ document signed by Pope Francis and a Grand Imam in February that stated, among other things, that a ‘pluralism and diversity, of religions, is willed by God.’”

But then, the only way we can know the will of God is what is revealed in His Word. The Bible does not endorse a world church but a definite coming out from among them. Not unity but separation. The Bible never teaches denominationalism or world church, but each local church is to be a group of simple, sincere, and scholarly Christians who meet to sing, pray, and preach without any interference from any government or denominational authority.

The Pope has no more biblical authority than an ordinary pastor or priest in an obscure village.

Francis is aware that his biggest problem in constructing the world church will be Muslims who are accustomed to running everything, including the guillotine. Also, the Jews have been around longer than anyone has, so they will not be quick to respond to this theological courtship or, more correctly, seduction. Some Jews even believe all non-Jews are of a different and inferior species! How will that play in Rome? Or Tehran?

So, headlines yell, “Vatican issues a happy Ramadan to all ‘Muslim brothers and sisters’”; however, traditional Muslims do not consider any non-Muslims as spiritually related. The Koran often identifies all non-Muslims as “polytheists,” “unbelievers,” “infidels,” etc., with which Muslims are not to be friendly. And for sure not to cooperate with them.

The Pope asserted, “We Muslims and Christians are called to open ourselves to others, knowing and recognizing them as brothers and sisters…. this way, we can tear down walls raised out of fear and ignorance and seek together to build bridges of friendship that are fundamental for the good of all humanity.”

When Reformers broke with Rome in the 16th century, they did not do so out of fear or ignorance but because of overwhelming convictions and intelligence. The Bible had been translated and was now available to everyone, and it was obvious that what Catholic leaders were teaching was not found in its pages. The Bible reader had been intimidated and harassed and had his pockets picked for centuries to construct massive cathedrals all over Europe.

With the translated Bible, they discovered that the Bible said nothing about Popes, archbishops, cardinals, holy water, rosary beads, hail Mary, the immaculate conception, lent, the sign of the cross, vestments, relics, statues, purgatory, limbo, penance, confession to a priest, elevation of Mary, indulgences, pilgrimages, etc.

When one gets rid of all that, he almost ends up with an independent Bible or Baptist Church!

(ANP EMERGENCY FUNDRAISER: Due to unexpected medical and emergency repair bills, please consider donating to ANP to help keep us in this ‘Info-war’ for America at this most critical time in US history, during a time of systematic ‘big tech’ censorship and widespread Democrat corruption.) 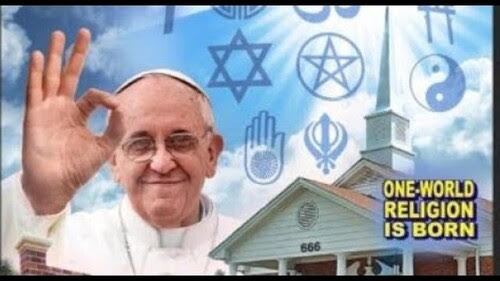 The average Christian finally read in the newly translated Bibles that independent churches were to be filled with simple and sincere people, where someone read the Bible, another prayed. Then the preacher (not a priest) delivered a sermon followed by the singing of hymns. No liturgy, no ceremony, no mass, no richly dressed preachers. The Europeans could find very little in the Bible that reflected what they had experienced for a lifetime in their vast cathedrals.

While Pope Francis spoke of “brothers and sisters” and friendship, ordinary Christians were chaffing under sharia in Muslim nations. Many were being persecuted as Francis gushed platitudes to appease and impress Muslim fanatics. He did not demand religious freedom or even tolerance on the part of Muslims in the Middle East nations.

Francis demands that Protestants forget about the doctrines and practices that precipitated the Reformation but does not require or even suggest that Muslim leaders must make major concessions with Koranic commands that deal with hating and killing Jews and Christians or even making friends with them.

No demands that female sexual mutilation is barbarity and must be stopped; no demand that honor killings are beastly; no requirements that killing any Muslim if he or she converts to Christ is criminal; and no demand for Islamic nations such as Saudi Arabia to permit Christian churches (not one in the whole nation). It seems Francis is quiet about the absurd and vile teachings of Islam.

But then, Francis is a bridge-builder; however, here is one dude who will never cross that bridge.

Pope Francis is a hypocrite who is more interested in public relations than helping the hurting and Gospel-deprived people under Islamic rule. But how can he give something he probably doesn’t have?

The Pope shamelessly speaks of building bridges rather than a hated wall to keep out unwanted immigrants while he lives behind a massive wall. Did I mention that Francis is a hypocrite?

But the Pope keeps trying. He is the only person in Europe who can give an order and see it carried out by non-thinking zealots. Only the Pope can break the barriers and usher in the World Church.

For sure, I’m not going to be a part of his world church, not even if I am promised the Pope’s tiara, the keys to his Popemobile, and the combination of the Vatican vault.

I had to struggle with the combination to the vault.