Or maybe he is just an Ass Clown?

Catholic bishop: Pope’s claim that Quran opposes violence “not true simply based on a plain reading of the Quran”

Jihad Watch – Schneider and Müller are likely now to run afoul of Pope Francis, who has made the risible claim that “authentic Islam and the proper reading of the Koran are opposed to every form of violence.” Although this is not and could not ever be a dogma of the Roman Catholic Church, it is assumed to be some kind of superdogma by the Catholic hierarchy worldwide, superseding all reason, all common sense, all fact, and all prudence, and is ruthlessly enforced, such that all those who stand by the truth are forcibly silenced and marginalized. 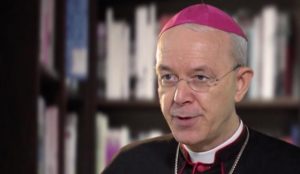 “Bishop Schneider: Catholics and Muslims share no common faith in God, no common adoration,” LifeSite News, June 8, 2020 (thanks to The Religion of Peace):

June 8, 2020 (LifeSiteNews) – Bishop Athanasius Schneider has once more raised his voice concerning the controversial February 4, 2019 Abu Dhabi Statement on Human Fraternity where Pope Francis and a Grand Imam jointly declared, among other problematic statements, that God wills a “diversity” of religions.

Bishop Schneider’s intervention (read full text [here]) comes after Cardinal Gerhard Müller wrote an extensive interpretation and explanation of that document. While Cardinal Müller presents an “interpretative key” with the help of which one might be able to read this document in a less controversial manner, Bishop Schneider points out those aspects of the document which are not in accordance with Catholic Tradition and thus need to be criticized.

Writing for the Catholic journal Communio (3/2020), Cardinal Müller stated that it is “sensational” that, “for the first time in the eventful and conflict-ridden history of the two largest faith communities of the world – comprising together of 3 billion people – the highest authority of the Catholic Church and a high-ranking religious and academic authority of the Islamic world present a common text” which expects from their faithful “a consent which binds them in their consciences.”

The German prelate explained that he wishes to present a “reading aid” for this document, which he assesses as being “not an act of the Magisterium” with regard to the revealed faith and morals, but still a document by the highest authority in the Church interpreting the natural moral law.

For the German prelate, this document “corresponds in its intention with the General Declaration of Human Rights by the United Nations (1948),” beside its dealing with faith in God and His Grace. He continued to explain that both in the Christian and in the Islamic tradition, the “faith in God” calls for “fraternity as a vocation and a demand upon man in his conscience.”…

As can be seen in this short summary of the new intervention of Cardinal Müller, he tries to interpret the Abu Dhabi document in a less controversial manner, similar to how he had approached, in 2017, the post-synodal exhortation Amoris Laetitia. At the time, he insisted that this document, which was used by shepherds in various places around the world as a justification to give Holy Communion to “remarried” Catholics currently living in adulterous unions, is not heretical. Or, as a title by the Website Crux put it in 2017: “Müller’s defense of ‘Amoris Laetitia’ reads it in Church tradition.”

With regard to Müller’s statement on the Abu Dhabi text, both Katholisch.de – the German bishops’ new website – as well as Vatican News reviewed it in a positive way.

However, there are different positions on how to approach some of these controversial documents by Pope Francis. Bishop Athanasius Schneider has chosen to directly confront the errors or ambiguities that are to be found in the Abu Dhabi statement. Only a few days ago, he already made a statement on the Abu Dhabi document opposing the view that God positively wills the diversity of religions. In that statement, Schneider discussed some problems regarding the Second Vatican Council’s teaching on religious freedom which might need a future correction, just as it has been done in the past with other conciliar statements of previous centuries.

In his new statement as sent to LifeSiteNews, the Kazakh bishop of German origin points out that the same above-mentioned sentence – namely, that the diversity of religions is willed by God, just as the diversity of color, sex, and more – is “the most erroneous and dangerous affirmation” of the text. Bishop Schneider also criticizes the document’s formulation about a common faith in God. By quoting Holy Scripture, he insists: “There is only ‘one Lord, one Faith, one Baptism’ (Eph. 4:5), ‘for all men have not faith.’ (2 Thess. 3:2)” In essence, there is only one true Faith, the Catholic Faith, and the other religions are false religions.

Further distinguishing between the Catholic Faith and the Muslim faith – and pointing to the Second Vatican Council’s ambiguous teaching in this specific matter – the German prelate writes: “To state that Muslims adore together with us the one God (‘nobiscum Deum adorant’), as Vatican II Council did in Lumen Gentium n. 16, is theologically a highly ambiguous affirmation. That we Catholics adore with the Muslims the one God is not true. We do not adore with them. In the act of adoration, we always adore the Holy Trinity, we do not simply adore ‘the one God’ but, rather, the Holy Trinity consciously—Father, Son, and Holy Ghost. Islam rejects the Holy Trinity. When the Muslims adore, they do not adore on the supernatural level of faith. Even our act of adoration is radically different.”…

“According to Surah 9:29,” he writes “Muslims are to ‘fight those who do not believe in Allah or in the Last Day and who do not consider unlawful what Allah and His Messenger have made unlawful and who do not adopt the religion of truth from those who were given the Scripture—[fight] until they give the tribute [jizyah] willingly while they are humbled.’”

“One cannot agree,” Schneider continues, “with the thesis that says that a proper reading of the Koran is opposed to every form of violence. First, this is not true simply based on a plain reading of the Koran. The later Surahs of the Koran are very violent toward non-Muslims and call for the occupation of non-Muslim countries by violence. Even in our days, this is well understood by many Muslims to be the legitimate method to read the Koran.”…

Therefore, the author comes to a clear conclusion with regard to the Abu Dhabi document: “From the theological point of view it is, therefore, misleading and confusing that the Roman Pontiff signed a common document with an Islamic religious authority using the terms ‘God’, ‘Faith’, ‘pluralism and diversity of religions’, ‘fraternity,’ though these terms have substantially different meanings in the teachings of the Koran and in the Divine Revelation of Our Lord Jesus Christ.”…