Idol Worshiping Pope Francis Gives Three More Titles To The ‘Virgin Mary’, Of Course They Were Stolen From God Just Like The Name ‘Holy Father’ Was

The new titles are “Mother of Mercy,” “Mother of Hope,” and “Comfort of Migrants.” In letter dated June 20, Guinean Cardinal Robert Sarah, prefect of the Vatican’s Congregation for Divine Worship and the Discipline of the Sacraments, announced the titles would be added to the Litany of Mary, called the “Litany of Loreto,” which is usually recited during the rosary or on major Catholic feasts. Addressed to the presidents of all bishops’ conferences worldwide, the letter said the move comes at the express wish of Pope Francis.

Geoffrey Grider | NTEB – Pope Francis has given the Virgin Mary three new titles, the Vatican announced Saturday, which will be added to the Catholic Church’s traditional ‘Litany of Loreto’ including one that reflects a signature preoccupation of this pope.

First let me say that the Roman Catholic ‘virgin Mary’ is not the humble and obedient Mary from the bible, not by a long shot. The Roman Catholic ‘ mary’ is a ‘Queen of Heaven’ superwoman who is literally divine, and appears to have taken over much of the workload from her overburdened Son Jesus.  According to the Litany of Loreto, the Roman Catholic ‘ mary’ is most renowned, the counselor, cause of all joy, without sin, queen of peace, and the comforter. And today, Pope Francis gave her three more titles as well – Mother of Mercy, Mother of Hope and Comfort of Immigrants. If most of these names and titles seems familiar to you, that’s because they are names and attributes of God in the bible.

Philippians 2:9-11 “Wherefore God also hath highly exalted him, and given him a name which is above every name: That at the name of Jesus every knee should bow, of things in heaven, and things in earth, and things under the earth; And that every tongue should confess that Jesus Christ is Lord, to the glory of God the Father.” 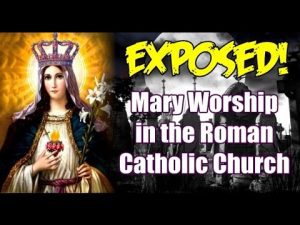 The real virgin Mary was not sinless, she was an obedient young woman who was visited by an angel, and was told God had selected her for a very special task, which she did beautifully. But Mary needed a Saviour just like every other sinner does, Mary performed no miracles, counseled no one, and performed no known function in the Church when it began. She was present in the upper room in Acts 2, but not in a seat of honor and she makes no remarks of any kind. Mary didn’t stay a virgin, giving birth to all these:

Mark 6:3 “Is not this the carpenter, the son of Mary, the brother of James, and Joses, and of Juda, and Simon? and are not his sisters here with us? And they were offended at him.”

So why does the Roman Catholic Church attribute all these miracles to her, and give her all these titles stolen from Jesus and the Holy Spirit? To get your focus off of the redemptive work of Jesus that can save you, and get you busy ‘venerating mary’ which has no saving power of any kind. The Roman Catholic Church is Satan’s masterpiece, the Catholic counterfeit, and it will damn your soul to an everlasting Hell. If you are counting on the ‘intercession of mary’ to get you to Heaven, you are already lost. Click here to see the bible’s path to the Throne of God.

THE ROMAN CATHOLIC CHURCH CALLS IT VENERATION, BUT THE BIBLE CALLS IT IDOL WORSHIP

FROM CRUX NOW: The new titles are “Mother of Mercy,” “Mother of Hope,” and “Comfort of Migrants.” In letter dated June 20, Guinean Cardinal Robert Sarah, prefect of the Vatican’s Congregation for Divine Worship and the Discipline of the Sacraments, announced the titles would be added to the Litany of Mary, called the “Litany of Loreto,” which is usually recited during the rosary or on major Catholic feasts.

Addressed to the presidents of all bishops’ conferences worldwide, the letter said the move comes at the express wish of Pope Francis.

In the letter, Sarah said “the Church which walks along the pathways of history as a pilgrim towards the heavenly Jerusalem and enjoys inseparable communion with Christ her Spouse and Savior, entrusts herself to her who believed in the word of the Lord.”

“We know from the Gospel that the disciples of Jesus had in fact learned from the very beginning to praise her as ‘blessed amongst women’ and to count on her maternal intercession,” he said, insisting that the numerous titles given to Mary throughout history are a “privileged and sure way to an encounter with Christ.”

Pope Francis has often emphasized the topic of mercy in the Church, most prominently through his 2015-2016 Jubilee of Mercy, and his own episcopal motto, Miserando atque eligendo, or, “choosing with mercy.”

He has also been a champion of migrants and refugees since his election in 2013, making frequent appeals on their behalf in his public audiences, and in his meetings with diplomats and heads of state. His first trip outside of Rome as pope was to the visit the Italian island of Lampedusa in 2013, where he met migrants detained at a large camp who had fled poverty and war in the Middle East and Africa.

In September 2019, he added a sculpture depicting a boat full of migrants to St. Peter’s Square. Marking the first new sculpture installed in square in over 400 years, it’s called, “Angels Unaware,” and depicts 140 migrants and refugees from different cultures and periods of history, including indigenous people, Jews escaping Nazi Germany, and Syrian and African refugees fleeing war and famine in modern times. READ MORE

Jim Caviezel’s Tribute to the Virgin Mary, Mother of All Peoples

Jim Caviezel, who played Jesus in The Passion of the Christ, gives a heartfelt talk on how the Virgin Mary interceded for him during his Hollywood career, and how she can intercede for peoples of all nations in these difficult times, dominated so much by the mass media culture.

This is Heresy and Biblical Ignorance that has Gone to Seed