Titus 1:9-14 “Holding fast the faithful word as he hath been taught, that he may be able by sound doctrine both to exhort and to convince the gainsayers. 10 For there are many unruly and vain talkers and deceivers, specially they of the circumcision: 11 Whose mouths must be stopped, who subvert whole houses, teaching things which they ought not, for filthy lucre’s sake. 12 One of themselves, even a prophet of their own, said, The Cretians (Catholics) are alway liars, evil beasts, slow bellies. 13 This witness is true. Wherefore rebuke them sharply, that they may be sound in the faith; 14 Not giving heed to Jewish fables, and commandments of men, that turn from the truth.” 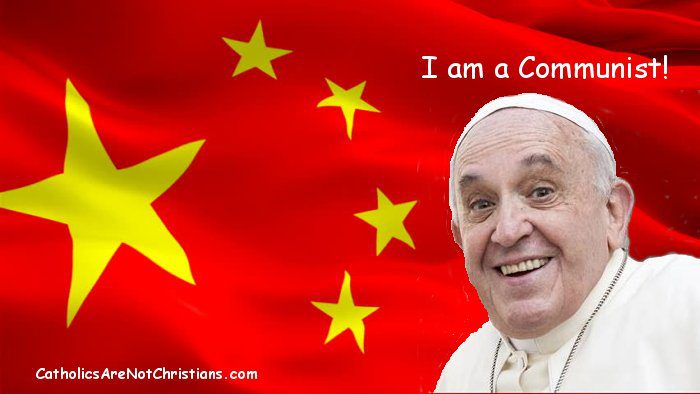 In a June 20th interview on The War Room, Mr. Guo said the CCP earmarks massive sums each year to win the allegiance of foreign countries including the Vatican, Italy, and Australia. Among them, the Vatican receives up to 2 billion dollars from the Chinese Communist Party every year, he said.

“The Chinese Communist Party allocates 2 billion US dollars each year” to gain influence over the Vatican’s internal policy making and to pay for its silence on the CCP’s repression of religious freedom, said the controversial billionaire whistleblower.

Guo has previously stated that China has drafted a complete strategy for world domination known by the initials “BGY,” which stands for Blue (control the Internet), Gold (buy influence with money), and Yellow (seduce key people with sex).

Since 2014, the CCP has formulated internal policies to invest a certain percentage of trade with foreign countries in the BGY program to erode the local state system, Guo said Saturday, and the current BGY quota for the United States is 5%.

According to data from the U.S. Trade Office, the total trade volume between China and the U.S. in 2018 was $7.37 trillion. If calculated according to 5%, the amount used for BGY in the United States would then be about $36.8 billion, Guo said.

“The trade volume between the CCP and Australia is about US $200 billion,” he said. “Previously, 1 percent was used for BGY, but it rose to 5 percent. That is, $10 billion was used for BGY.”

According to Guo, these huge amounts of BGY funds are employed for a variety of uses, including bribing local officials, regulating media messaging, and controlling local resources.

A 2019 report released by the International Cyber Policy Centre at the Australian Strategic Policy Institute revealed hundreds of Twitter accounts linked to the state-backed effort to denigrate pro-democracy protests in Hong Kong had formerly been used to target critics of the Chinese government, principally Guo Wengui.

The accounts were part of a coordinated information campaign operating for more than two years to target Mr. Guo as well as jailed publisher Gui Minhai.

“Those early efforts are an attempt to shape sentiment and the international narrative around these prominent critics of the Chinese government and to shape them in such a way as to influence the Chinese diaspora’s perception of these individuals,” said Jake Wallis, one of the report’s chief authors.

For its part, the Vatican has been carrying on a charm offensive with the CCP for several years, and in September 2018 signed an important secret accord with Beijing concerning the appointment of Catholic bishops in China.

According to veteran Vatican journalist John L. Allen, Jr., the Vatican has spared no effort in its attempt to woo Beijing into full diplomatic relations, a key priority of the Francis papacy.

The Vatican is “covetous of a relationship with China, and often apparently willing to stifle objections and give away a great deal” in order to move toward that goal, Allen wrote last month.

In short, “the Vatican is moving full-steam ahead in its courtship of Beijing, with the ultimate prize remaining full diplomatic relations, a secure legal standing for the church, and partnerships on the global stage,” Allen wrote.

The Vatican’s 2018 overture to Beijing was sweetened by the May 2020 launch of a new Chinese edition of the Jesuit-edited journal Civiltà Cattolica, which enjoys a semi-official Vatican status, Allen noted.

La Civiltà Cattolica said the new edition is meant “as a gesture of friendship, given the increasingly important role that the Chinese language plays in the contemporary world within the global context.”

Mr. Allen’s appraisal of the Vatican’s courtship of China squares with what other Vatican-watchers have been observing as well.

Francis dreams of being the pope who will establish diplomatic relations with Beijing, and to achieve this goal he is willing to make “concessions,” declared Vatican analyst Alban Mikozy on French television last December.

“Pope Francis is a prudent man,” Mikozy said. “He pursues a dream: to be the sovereign pontiff who will restore relations between China and the Vatican.”

“In order to do this, he is ready to make a few concessions: say nothing about Hong Kong, do not get too excited when the Chinese leader talks about rewriting the Bible,” he added, in reference to announcements that the CCP intends to retranslate the Bible and other sacred texts to make them conform to socialist ideology.

Because of this overarching desire, Mikozy said, the pope is willing to turn a blind eye to the CCP’s violations of religious liberty and other human rights issues.

Last November, for instance, during an in-flight press conference during his return flight from Asia, the pope reiterated his desire to visit China, while dodging questions about the Hong Kong pro-democracy protests.

“I would like to go to Beijing,” Francis said. “I love China.”

According to Mikozy, the pope’s silence on Hong Kong suggests that he will go to great lengths not to offend the CCP.

The pope has lavished fulsome praise on China, insisting that China’s communist government protects religious freedom and that “churches are full.”

Meanwhile, the chancellor of the Pontifical Academy of Social Sciences, the Argentinian Bishop Marcelo Sanchez Sorondo, has held up communist China as the best model for living out Catholic social teaching today.

Pope Francis loves China because he is a Communist also!