When are you good people, who’s eyes are partially open, going to get the Hell of this Whore, Babylonian, Anti-Christ Religion and embrace the True Gospel of Jesus Christ? The whole belief is contrary to Word of God!  And the ones scolding him are no better then he is. Your religion is NOT Christian, it is Pagan and is accursed.

Galatians 1:6-9 “I marvel that ye are so soon removed from him that called you into the grace of Christ unto another gospel: 7 Which is not another; but there be some that trouble you, and would pervert the gospel of Christ.But though we, or an angel from heaven, preach any other gospel unto you than that which we have preached unto you, let him be accursed.9 As we said before, so say I now again, If any man preach any other gospel unto you than that ye have received, let him be accursed.”

Get out now and repent! 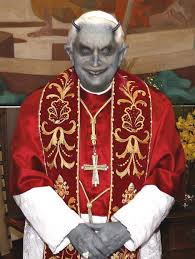 –  Expressing “profound grief” and “filial devotion,” Catholic clergy and lay scholars from around the world have issued what they are calling a “Filial Correction” to Pope Francis for “propagating heresy.”

The Filial Correction, in the form of a 25-page letter, bears the signatures of sixty-two Catholic academics, researchers, and scholars in various fields from twenty countries. They assert that Pope Francis has supported heretical positions about marriage, the moral life, and the Eucharist that are causing a host of “heresies and other errors” to spread throughout the Catholic Church.

The correction was delivered to the Pope at his Santa Marta residence on August 11, 2017. No similar action has taken place within the Catholic Church since the Middle Ages, when Pope John XXII was admonished for errors which he later recanted on his deathbed.

“With profound grief, but moved by fidelity to our Lord Jesus Christ, by love for the Church and for the papacy, and by filial devotion toward yourself, we are compelled to address a correction to Your Holiness on account of the propagation of heresies effected by the apostolic exhortation Amoris laetitia and by other words, deeds and omissions of Your Holiness,” the signers write in the letter.

“As subjects, we do not have the right to issue to Your Holiness that form of correction by which a superior coerces those subject to him with the threat or administration of punishment,” they state.

“We issue this correction, rather, to protect our fellow Catholics — and those outside the Church, from whom the key of knowledge must not be taken away — hoping to prevent the further spread of doctrines which tend of themselves to the profaning of all the sacraments and the subversion of the Law of God,” they add.

The signers respectfully insist that Pope Francis condemn the heresies that he has “directly or indirectly upheld,” and that he teach the truth of the Catholic faith in its integrity.

They say that they make “no judgment” about the Pope’s culpability in propagating the seven heresies they list. They add that it is not their task to “judge whether the sin of heresy has been committed” whereby a person “departs from the faith by doubting or denying some revealed truth with a full choice of the will.”

The letter was made public today, six weeks after the signers received no response from the Pope.

The 62 clergy and lay scholars explain that, as believing and practicing Catholics, they have the right and duty to issue such a correction to the Pope “by natural law, by the law of Christ, and by the law of the Church” and that the correction in no way undermines Catholic teaching on papal infallibility.

The Catholic Church teaches that the Pope is infallible (incapable of error by a special gift of the Holy Spirit) when certain conditions are met. He teaches infallibly in his ordinary capacity when a doctrine is consistent, constant, and universal in relation to what the Church and other popes have always taught. Or in an extraordinary capacity, he teaches infallibly when he speaks “ex cathedra,” that is, when he speaks in the capacity of his office as Apostolic pastor and teacher for the purpose of defining a “doctrine of faith or morals to be held by the whole Church.” The Pope is not infallible in other matters, such as when he gives an off-the-cuff interview or presents his personal reflection on a given topic.

“We adhere wholeheartedly to the doctrine of papal infallibility,” the signers state, adding that in their opinion “neither Amoris Laetitia nor any of the statements which have served to propagate the heresies which this exhortation insinuates are protected by that divine guarantee of truth.” The signers’ opinion that the exhortation is not infallible magisterial teaching is backed by leading churchmen, such as Cardinal Raymond Burke.

The signers list a dozen passages from Amoris Laetitia that they say “serve to propagate seven heretical propositions.”

Included in the list is the “smoking” footnote 351 where the Pope writes that those living in an objective situation of sin can receive the “help of the sacraments” to grow in the life of grace and charity. Many have interpreted this to mean that civilly-divorced-and-remarried Catholics living in adultery can receive Holy Communion, and the Pope has endorsed guidelines allowing this. Also included in the list is the text pertaining to couples living in adultery who, the Pope writes, see their situation as “what God himself is asking” of them, despite falling short of the “objective ideal.”

The scholars say that these passages along with a number of “words, deeds and omissions” of the Pope are “serving to propagate heresies within the Church.”

According to the signers, the “words, deeds and omissions” of Pope Francis that promote heresy include:

The Catholic clergy and lay scholars go on to list seven “false and heretical propositions” which they say Pope Francis “directly or indirectly” upholds through his “words, deeds, and omissions.” These seven propositions, listed below, are summaries of the positions which they attribute to Pope Francis and deem to be heretical.

The clergy and scholars state that these “propositions all contradict truths that are divinely revealed, and that Catholics must believe with the assent of divine faith.”

They add that it is “necessary” that such heresies be “condemned by the authority of the Church,” on account of the “great and imminent danger” they cause to souls.

As one of the signers explained to LifeSiteNews, St. Thomas Aquinas taught that faithful Catholics have a duty to correct an erring prelate. He quoted the following passage from the saint’s famous theological work Summa Theologiae:

If the faith were endangered, a subject ought to rebuke his prelate even publicly. Hence Paul, who was Peter’s subject, rebuked him in public, on account of the imminent danger of scandal concerning the faith, and, as the gloss of Augustine says on Gal. 2:11, Peter gave an example to superiors, that if at any time they should happen to stray from the straight path, they should not disdain to be reproved by their subjects.

The signers conclude the letter, writing: “At this critical hour, therefore, we turn to the cathedra veritatis [seat of truth], the Roman Church, which has by divine law pre-eminence over all the churches, and of which we are and intend always to remain loyal children, and we respectfully insist that Your Holiness publicly reject these propositions, thus accomplishing the mandate of our Lord Jesus Christ given to St Peter and through him to all his successors until the end of the world: ‘I have prayed for thee, that thy faith fail not: and thou, being once converted, confirm thy brethren.’”

One significant name in the list of signers is that of Bishop Bernard Fellay, superior general of the traditionalist Society of Saint Pius X (SSPX). He signed the letter after it had already been submitted to the Pope. It remains to be seen how Fellay’s agreement with the content of the filial correction will affect Pope Francis’ recent efforts to integrate the SSPX legally into the Catholic Church.

Signs of the times

The filial correction comes after more than a year of the Pope not dialoguing or engaging with faithful Catholics who have approached him directly with serious concerns about how he is steering the Barque of Peter, the Church. The Pope has been sent letters, petitions, video messages, and official questions (the dubia), but all to no avail. Significant dates of attempts to dialogue with the Pope include:

The filial correction comes as a “formal correction” of the Pope from cardinals may be imminent.

Cardinal Raymond Burke, one of the dubia Cardinals, told The Wanderer last month that this “formal correction” would involve a clear presentation of the Church’s teaching on the points at issue, alongside what the Pope is actually saying on those points. “If there is a contradiction, the Roman Pontiff is called to conform his own teaching in obedience to Christ and the Magisterium of the Church,” he said.

“It is done very simply by a formal declaration to which the Holy Father would be obliged to respond,” he said.

Burke said he and the other three cardinals – Walter Brandmuller, Joachim Meisner, and Carlo Caffarra (the latter two now deceased) – issued the dubia “in order to give [Pope Francis] the occasion to set forth the Church’s unchanging teaching.”

“Pope Francis has chosen not to respond to the five dubia, so it is now necessary simply to state what the Church teaches about marriage, the family, acts that are intrinsically evil, and so forth,” he explained. “These are the points that are not clear in the current teachings of the Roman Pontiff; therefore, this situation must be corrected. The correction would then direct itself principally to those doctrinal points.”

In an interview this week with Australia’s Catholic Outlook, Burke said the need for a response to the dubia is urgent because of the “harm done to souls by the confusion and error.”

“The urgency weighs very heavily on my heart,” he said.

The Filial Correction and its signatories, along with a summary statement and press release, can be viewed at www.correctiofilialis.org.