I just came across this after posting the NTEB article. It is NOT surprising (to me at least) because most Catholics are Communist Democrats! There is a Kinship between the two—it is Curse that is handed down—and is in their blood to be Communists!!

“Justice Democrats” Symbol a Variation of Communist Hammer and Sickle 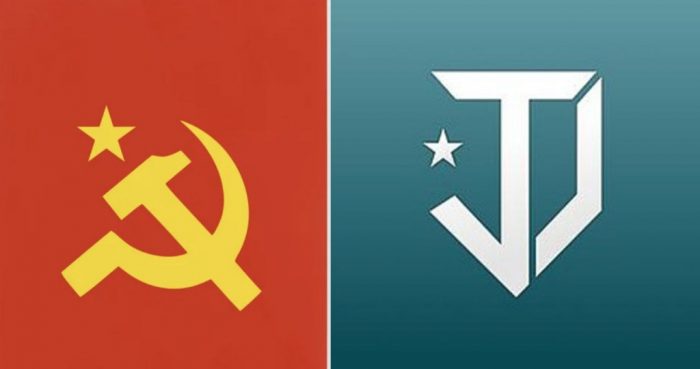 Democrats united around “Social Justice” have formed an organization called Justice Democrats. Not even trying to hide their Marxist ideology, their symbol is an obvious variation of the famous Communist “Hammer and Sickle” design.

Justice Democrats, led by these two women, is a Congressional organization designed to help Democrats caucus together in ways that will increase the size of government and redistribute wealth. Source

Geoffrey Grider | NTEB –  As a number of prospective presidential candidates from the Democrat party are openly donning the mantle of socialism, America took the issue one step further, suggesting that the negative reaction to “Bernie Sanders’s inspiring 2016 primary bid and the electoral success of Alexandria Ocasio-Cortez and Rashida Tlaib” represents a “revival of socialist hysteria.” Dettloff showcases Marxist priests “like Herbert McCabe, O.P., Ernesto and Fernando Cardenal, S.J., Frei Betto, O.P., Camilo Torres” who “have been inspired by communists and in many places contributed to communist and communist-influenced movements as members,” as if the corruption of Catholic clergy were grounds for supporting Marxism.

The Jesuit flagship publication in the United States, America magazine, has published an article defending Marxism and comparing the murderous, atheist ideology to Catholicism.

All Bible believers know that in the time of Jacob’s trouble, the Roman Catholic harlot seen in Revelation 17 and 18 rises to have world domination under the leadership of Antichrist. One sure sign that we are getting very, very close to that time period is on full display in the latest edition of ‘America‘, the official magazine of the Jesuits. They have become so bold that they are actually beginning to tell the truth, little do they realize that the King James Bible they hate so much is already light-years ahead of them.

“So he carried me away in the spirit into the wilderness: and I saw a woman sit upon a scarlet coloured beast, full of names of blasphemy, having seven heads and ten horns. And the woman was arrayed in purple and scarlet colour, and decked with gold and precious stones and pearls, having a golden cup in her hand full of abominations and filthiness of her fornication:

And upon her forehead was a name written, MYSTERY, BABYLON THE GREAT, THE MOTHER OF HARLOTS AND ABOMINATIONS OF THE EARTH.” Revelation 17:3-5

One of the first end times books I ever read back when I got saved in 1990 was a book called ‘Smokescreens‘ from Chick Gospel Tract company. And man, oh man, was that book ever an eye-opener for me. In it, Jack Chick exposed Roman Catholicism in all its gory glory, and me being just recently saved out of the Roman Catholic system, I could personally vouch for everything I was reading in that book. I highly suggest you get a copy for yourself. The Vatican and Communism have been thick as thieves for generations now, and a hearty THANK YOU to ‘America’ magazine for showing the world that Jack Chick was right all along.

Let me just make one last point on the subject of Communism and Catholicism. The Catholic Church is nothing more than a Christian counterfeit ‘church’, and absolutely not the Church that Jesus shed His blood for. So when you read about murderous and vile dictators like Adolf Hitler, Benito Mussolini and others being “christians”, they were no such thing. No sir! Everytime you read about that read just a tad deeper and you will find that these people are Roman Catholics. The Vatican loves to wheel and deal with rogue dictators, take a look:

The Jesuits’ decision to publish a radical article of this sort suggests that they believe public opinion is warming toward communism.

FROM BREITBART NEWS: In “The Catholic Case for Communism,” America writer Dean Dettloff says that the militant atheism of Marxist politics is “understandable” because “Christianity has so often been a force allied to the ruling powers that exploit the poor.”

As a number of prospective presidential candidates from the Democrat party are openly donning the mantle of socialism, America took the issue one step further, suggesting that the negative reaction to “Bernie Sanders’s inspiring 2016 primary bid and the electoral success of Alexandria Ocasio-Cortez and Rashida Tlaib” represents a “revival of socialist hysteria.”

Dettloff showcases Marxist priests “like Herbert McCabe, O.P., Ernesto and Fernando Cardenal, S.J., Frei Betto, O.P., Camilo Torres” who “have been inspired by communists and in many places contributed to communist and communist-influenced movements as members,” as if the corruption of Catholic clergy were grounds for supporting Marxism.

“Many of my friends in the Party for Socialism and Liberation, for example, a Marxist-Leninist party, are churchgoing Christians or folks without a grudge against their Christian upbringing,” Dettloff declares, “as are lots of people in the radical wing of the Democratic Socialists of America.”

The writer then describes Catholicism as just another ideological “faction” alongside other factions, such as communism.

“The history of communism, whatever else it might be, will always contain a history of Christianity, and vice versa, whether members of either faction like it or not,” he proposes.

CLICK TO READ THE NTEB ARCHIVE ON THE ROMAN CATHOLIC CHURCH

Citing Marxist arguments, Dettloff makes the bizarre claim that the ownership of private property necessarily leads to slavery, since property owners come to see other people as just another form of property to be owned.

Capitalism emerged through “the privatization of what was once public, like shared land,” Dettloff declares, paraphrasing Marx. “As time went on, human beings themselves would become the private property of other human beings.”

Communists, on the other hand, are loving people concerned above all for the good of the poor, even if they have occasionally strayed from their pure roots, he suggests.

“Communism has provided one of the few sustainable oppositions to capitalism, a global political order responsible for the ongoing suffering of millions,” Dettloff states. “Communism in its socio-political expression has at times caused great human and ecological suffering,” Dettloff concedes, but any “good communist is quick to admit as much,” he adds, because “communism is an unfinished project that depends on the recognition of its real and tragic mistakes.”

Mr. Dettloff evidently believes that over 100 million deaths in the 20th century can be reduced to “great human and ecological suffering” caused by the Marxist ideology being an “unfinished project.”

One would be tempted to suggest that if Marxism were a “finished” project, the deaths would be many times greater. Dettloff goes so far as to parallel Marx’s The Communist Manifesto to Catholic teaching on the nature of private property.

“I learned much from the Order of the Jesuits. Until now, there has never been anything more grandiose, on the earth, than the hierarchical organization of the Catholic church. I transferred much of this organization into my own party.” Adolf Hitler

In what has been called the “Magna Carta” of Catholic social thought, Pope Leo XIII wrote something a trifle different in his 1891 encyclical letter Rerum Novarum.

The socialists, Leo wrote, “working on the poor man’s envy of the rich, are striving to do away with private property, and contend that individual possessions should become the common property of all, to be administered by the State or by municipal bodies.”

Their proposals are, however, “emphatically unjust,” Leo wrote, “for they would rob the lawful possessor, distort the functions of the State, and create utter confusion in the community.”

“Socialists, therefore, by endeavoring to transfer the possessions of individuals to the community at large, strike at the interests of every wage-earner, since they would deprive him of the liberty of disposing of his wages, and thereby of all hope and possibility of increasing his resources and of bettering his condition in life,” Leo wrote.

The remedy to injustice proposed by the socialists is “manifestly against justice,” he continued, since “every man has by nature the right to possess property as his own.” The Jesuits’ decision to publish a radical article of this sort suggests that they believe public opinion is warming toward communism. America’s editors have floated a weather balloon to see how Americans react to communism 2.0.

In so doing, the Jesuits have likely overplayed their hand. Even in the age of Francis, too many people remember that communism has been one of the most destructive and murderous ideologies in the history of humanity. A century of unspeakable terror, tortures, and massacres is difficult to forget. READ MORE