Pope Francis, Alone In St. Peter’s Basilica, Lifts Up Monstrance Of The Sun God And Calls On ‘Intercession Of Mary’ To Save World From COVID-19 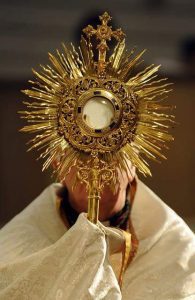 Geoffrey Grider | NTEB -The rituals performed by the Roman Catholic church are not found in the New Testament, they are found partially in the Old Testament, as well as in the mystery religions from ancient Babylon and Egypt. Look at the photo at the top, and you will see Pope Francis holding up a golden sunburst device called a ‘monstrance’ which holds the ‘blessed sacrament’ of the Eucharist that they pray to. They call it the ‘adoration of the Blessed Sacrament’, and it is idol worship. You will note that not only is the device in the shape of a golden sun, Pope Francis is also wearing a garment with a golden sun on the back.

Pope Francis held the special Urbi et Orbi on Friday from the steps of St. Peter’s Basilica, lifting up the monstrance of the sun god, and appealing to the Virgin Mary to save us all.

Like a scene from out of the Chick tract, “Why Is Mary Crying?‘, Pope Francis stood alone in a rain-swept Saint Peter’s Basilica in Rome, lifted up the golden Catholic idol of the Sun God called the ‘blessed sacrament’, and called on the Virgin Mary to ‘save the world’ from the COVID-19 coronavirus. You will note that none of what Pope Francis did during the ceremonial ritual so important to Catholics is found anywhere in the Bible, except in places forbidding such practices.

Jeremiah 7:18-19 “The children gather wood, and the fathers kindle the fire, and the women knead their dough, to make cakes to the queen of heaven, and to pour out drink offerings unto other gods, that they may provoke me to anger. Do they provoke me to anger? saith the LORD: do they not provoke themselves to the confusion of their own faces?”

No one in the New Testament every asked Mary’s advice on anything, in the Upper Room on the day of Pentecost, she was a silent observer, Peter was the one in charge. Mary’s help or assistance is never recorded. Yet amazingly, the Roman Catholic church would like us to believe that not only is she the channel through which “all graces flow”, that even salvation through Jesus Christ is not possible unless she intercedes for you.

Wow, talk about a promotion for Mary, and also true, talk about fantasy. Everything about the Roman Catholic Church comes from paganism, talk a look at the following.

Lent Is Actually The Pagan ‘Weeping For Tammuz’ Ritual

The rituals performed by the Roman Catholic church are not found in the New Testament, they are found partially in the Old Testament, as well as in the mystery religions from ancient Babylon and Egypt. Look at the photo at the top, and you will see Pope Francis holding up a golden sunburst device called a ‘monstrance’ which holds the ‘blessed sacrament’ of the Eucharist that they pray to. They call it the ‘adoration of the Blessed Sacrament’, and it is idol worship. You will note that not only is the device in the shape of a golden sun, Pope Francis is also wearing a garment with a golden sun on the back. Please note the following:

The Vatican And The Sun God

If the apostle Peter, whom the Catholic church says is their ‘first pope’ could somehow come back and watch Pope Francis performing these rituals, Peter would know instantly what he was looking at. He’d be looking at idol worship in pagan Rome, where he was executed by the Romans 2,000 years ago. Neither Peter or any of the apostles ‘adored the Eucharist’, asked Mary to ‘intercede to Jesus’ on their behalf, observed Lent, or celebrated Christmas or Easter. These practices would not be created until the start of the Roman Catholic Church that began in 325 AD.

Revelation 18:4-5 “And I heard another voice from heaven, saying, Come out of her, my people, that ye be not partakers of her sins, and that ye receive not of her plagues. For her sins have reached unto heaven, and God hath remembered her iniquities.”

“I would like this evening to entrust all of you to the Lord, through the intercession of Mary”

FROM VATICAN NEWS: Standing in a deserted St. Peter’s Square with a steady rain falling, Pope Francis spoke to the world through all the means of modern communication: Facebook, YouTube, TV, and radio.

He prayed for the world at this critical juncture in the presence of two images that have accompanied the people of Rome for centuries: the ancient icon of Mary Salus Populi Romani – usually housed in the Basilica of St. Mary Major – and the miraculous crucifix kept in the church of San Marcello on the city’s Via del Corso.

Most importantly, the Pope exposed the Blessed Sacrament for adoration and imparted his Apostolic Blessing, offering everyone the opportunity to receive a plenary indulgence.

Concluding his meditation, Pope Francis entrusted us all to the Lord, through the intercession of the Blessed Virgin Mary, so that our faith might not waiver in this time of crisis.

“Dear brothers and sisters, from this place that tells of Peter’s rock-solid faith, I would like this evening to entrust all of you to the Lord, through the intercession of Mary, Health of the People and Star of the stormy Sea. From this colonnade that embraces Rome and the whole world, may God’s blessing come down upon you as a consoling embrace. Lord, may you bless the world, give health to our bodies and comfort our hearts. You ask us not to be afraid. Yet our faith is weak and we are fearful. But you, Lord, will not leave us at the mercy of the storm. Tell us again: ‘Do not be afraid’ (Mt 28:5). And we, together with Peter, ‘cast all our anxieties onto you, for you care about us’ (cf. 1Pet 5:7).” READ MORE

An interesting homemade video on the Vatican and the Sun God and its sun god symbolism.

Mystery of Iniquity | The Two Babylons by Alexander Hislop

Rick Warren is seen slyly referring to Pope Francis as “our pope”, and then going on to brag about what a great job he is doing. He wants you to blithely assume that of course Pope Francis is the “spiritual head” over all of Christianity and not simply over the Roman Catholic corporation. He slips it in like that’s what everyone already thinks and believes. This is nothing more than mental conditioning. A bible believing Christian under no circumstances ever would acknowledge that any pope in the Roman system had any sort of rule over them of any kind.