Not only are they false prophets, they are anti-Christs! 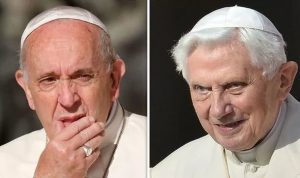 POPE BENEDICT is “plotting the downfall of Pope Francis,” a panicked expert has warned after admitting Francis has been unable to push through vital changes to Catholicism in the hope of modernizing the church.

Many cite Benedict as one of the key traditionalists within the Catholic church is pushing against Francis’ wish to allow sweeping changes at the Vatican in order to appeal to today’s worshippers. Expert Lynda Telford, author of ‘Women in the Vatican: Female Power in a Male World’, argues that Francis has wanted to continue the late Pope John Paul I’s work in ensuring acts such as contraception can be used within the church without prejudice. However, she fears that Benedict – who stood down as pope in a historic move in 2013 – is leading a charge of angry traditionalists within the Vatican who do not want to see such modern ideals as part of a new Catholicism mandate. Read all here