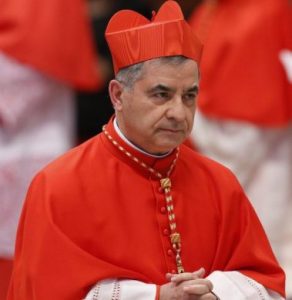 Geoffrey Grider | NTEB – The Vatican provided no details on why Pope Francis accepted Becciu’s resignation in a statement late Thursday. In the one-sentence announcement, the Holy See said only that Francis had accepted Becciu’s resignation as prefect of the Congregation for the Causes of Saints “and his rights connected to the cardinalate.” Becciu, the former No. 2 in the Vatican’s secretariat of state, has been reportedly implicated in a financial scandal involving the Vatican’s investment in a London real estate deal that has lost the Holy See millions of euros in fees paid to middlemen.

The powerful head of the Vatican’s saint-making office, Cardinal Angelo Becciu, resigned suddenly Thursday from the post and renounced his rights as a cardinal amid a financial scandal that has reportedly implicated him indirectly.

Think of how crazy this is. The man who is in charge of running the Vatican office that ‘creates saints’ is forced to resign under a cloud of scandal so dark that Pope Francis and the Vatican won’t even tell you what the reason is. Some are saying it is a financial scandal, perhaps related to the Vatican funding the Elton John biopic ‘Rocketman’, which proudly featured Hollywood’s first gay sex scene. Others are comparing this to previous cardinals who quit in dramatic fashion as Becciu has, due to homosexual child rape accusations. So take your pic, financial impropriety or pedophilia.

“After the devil himself, there is no worse folk than the pope and his followers.” – Martin Luther

Isn’t it amazing that the same people who tell you they have the power to ‘create saints’ are mired as deep in scandal as any politician or mafioso? If you think that this holy Roman mess is the church that Jesus went to the cross to start, you couldn’t be more mistaken. The Vatican is a pit of devils, and will be right up to the moment God destroys it all in Revelation 18.

Who is a Saint?

Becciu, the former No. 2 in the Vatican’s secretariat of state, has been reportedly implicated in a financial scandal involving the Vatican’s investment in a London real estate deal that has lost the Holy See millions of euros in fees paid to middlemen.

The Vatican prosecutor has placed several Vatican officials under investigation, as well as the middlemen, but not Becciu. Becciu has defended the soundness of the original investment and denied any wrongdoing, and it’s not clear whether the scandal itself was behind his resignation or possibly sparked a separate line of inquiry.

But the late-breaking news of his resignation, the severity of his apparent sanction, the Vatican’s tight-lipped release and the unexpected downfall of one of the most powerful Vatican officials all suggested a shocking new chapter in the scandal, which has convulsed the Vatican for the past year.

The last time a cardinal’s rights were removed was when American Theodore McCarrick renounced his rights and privileges as a cardinal in July 2018 amid a sexual abuse investigation. He was subsequently defrocked altogether by Francis last year for sexually abusing adults as well as minors.

Before him, the late Scottish Cardinal Keith O’Brien in 2015 relinquished the rights and privileges of being a cardinal after unidentified priests alleged sexual misconduct. O’Brien was, however, allowed to retain the cardinal’s title and he died a member of the College of Cardinals, the elite group of churchmen whose main job is to elect a pope.

In the Vatican statement, the Holy See identified Becciu as “His Eminence Cardinal Angelo Becciu,” making clear he remained a cardinal but without any rights.

At 72, Becciu would have been able to participate in a possible future conclave to elect Francis’ successor. Cardinals over age 80 can’t vote. But by renouncing his rights as a cardinal, Becciu has relinquished his rights to take part.

Becciu was the “substitute,” or top deputy in the secretariat of state from 2011-2018, when Francis made him a cardinal and moved him into the Vatican’s saint-making office. He straddled two pontificates, having been named by Pope Benedict XVI and entrusted with essentially running the Curia, or Vatican bureaucracy, a position that gave him enormous influence and power. READ MORE