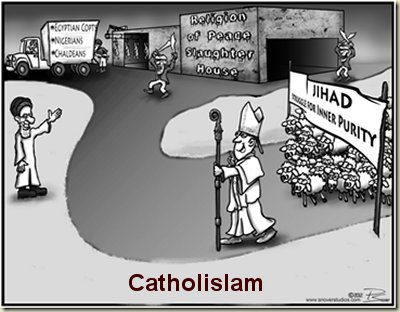 Robert Spencer | Jihad Watch – How broadminded! How generous! The idea here is to introduce some quality control in the training of imams: to make sure that they learn about Belgian values, and that they aren’t taught that jihad warfare against unbelievers and the subjugation of those unbelievers under Islamic law is something they should pursue. But that imperative is taught in. the Qur’an and Sunnah. Unless they’re going to introduce a different Qur’an and Sunnah in Belgium, it will be hard to keep it out. The Catholic universities will also be too wary of committing “Islamophobia” to exercise too much oversight over the content of the classes, much less to dictate what can and cannot be taught.

Meanwhile, when are the Islamic institutions in Belgium starting their training of Catholic priests?

LEUVEN, Belgium, February 7, 2020 (LifeSiteNews) – Two prestigious Catholic universities will offer programs for the first time in Belgium to help train imams who serve as prayer leaders and preachers in mosques.

Announced at the end of 2019, the programs of study grew out of the work of an official commission “launched after Islamist attacks in Brussels in 2016,” reported weekly newspaper The Tablet. The aim is to provide university-level education for prospective imams.

In Belgium, certain ministers of religion are paid by the government. Following the new programs supported by two Catholic universities, this also will be possible for imams, as the courses will be recognized by the state.

Flanders Today indicated that another goal of the new programs is “to persuade people with an Islamic vocation to study at home rather than abroad.”

“We are building a Belgian training program for ministers in the Islamic faith in order to reduce foreign influence,” explained Koen Geens, Belgium’s minister of justice and a member of the Christian Democrats. “It’s important that we know what they are studying.”

According to Flanders Today, the programs are not only directed at educating imams but at preparing people “for other roles in the Islamic faith, such as counselors, pastors and theologians. The goal is to make sure that their religious knowledge is accompanied by an appreciation of Belgium’s laws and social values.”

In a second and longer step, Flanders Today continued, students will have to undergo theological formation in their religion, “including study of the Koran and some kind of internship.”

Responsible for the theological component of the program will be a new institute called AFOR, which was set up in conjunction with the government and the Executive of Belgian Muslims. Here, the Catholic universities no longer play a role….

Flanders Today mentioned the Catholic University of Leuven was expecting around 30 students to start their six years of preparation for becoming an imam. Courses begin this month….