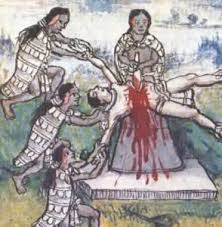 Last week shocking news from Rome published on LifeSiteNews regarding Steven Mosher, the founder and president of the Population Research Institute, who said that the Communist Chinese government is harvesting organs from prisoners while they are still alive to supply its lucrative organ transplant industry. This and other shocking claims were made by him at the May 20-21 John Paul II Academy for Human Life and the Family conference on “Brain Death: A Medicolegal Construct: Scientific & Philosophical Evidence.”

However, what LifeSiteNews and Mosher don’t know, is that the Vatican has been doing the same thing in Africa for many years, thanks to the secret activities in this field conducted by  important figures of the African Catholic Church and the Sovereign Military Order of Malta (SMOM). For large quantities of money, these New World Order criminals have literally abducted and killed thousands of Africans to harvest their organs and sell them to the best buyers in the international market for transplants.

So, since they are cashing in, why should the Vatican Jesuits, who work closely with Communist China do anything about it? Mosher, who said that “It would be very helpful if the Pontifical Academy of Sciences, headed by Archbishop Marcello Sorondo, would actually speak out against the continuing practice of organ harvesting in China from people who are executed for their organs,” is totally deluding himself or selling disinformation to a bunch of gullible individuals who still believe the Vatican can help, when they are at the center of this infamous business, because money is the force that rules the decisions of the so-called Holy See controlled by Satan himself.

Mosher declared that China, who is apparently the world’s leader in organ transplants, has moved to a “more advanced” version of its decades-long practice of executing prisoners for their organs, and is now “paralyzing their victims” in order to extract their organs while they are still alive, and somewhere in the jungles of Africa, the Vatican and their Knights of Malta are doing exactly the same thing.

This extremely sensitive information regarding the harvesting of organs by the Vatican was given to me by trusted Vatican sources back in 2013. One is a chaplain of the Sovereign Military Order of Malta in Rome, and the other, Massimiliano Mion, a Knight of the Orthodox Knights of Malta.

Last but not least, there is no way Archbishop Sorondo, who in February 2018 drew sharp criticism after he praised the Chinese Communist regime for being, “The best implementer of Catholic social doctrine,” will ever help Mosher in his quest to stop the Chinese harvesting organs program. So please stop this futile attempt to gain attention and point your finger at the heart of the problem, being the infamous Jesuit Order in bed with the Chinese for a long time.

The history of the mission of the Jesuits in China in the  modern era stands as one of the notable events in the early history of relations between China and the West. The missionary efforts and other work of the Society of Jesus, or Jesuits between the sixteenth and seventeenth century played a significant role from the beginning by introducing Western knowledge, science, and culture to China.  Source: Leo Zagami

Isn’t it ironic that the luciferians want to keep babies alive in post-birth abortions so they can harvest their organs for profit?