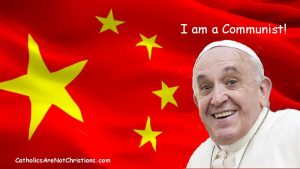 Leo Zagami – It is not yet a full on diplomatic crisis between the Vatican and the United States, but it looks like another nightmare for the already troubled Vatican as they prepare for the return of Cardinal Pell to save their finances.

About 10 days before he was expected in Rome, U.S. Secretary of State Mike Pompeo tweeted that the Vatican “endangers its moral authority” in relation to China. Since then, the relations between the Holy See and the U.S. have undergone extraordinary tension because of the renewel of the agreement originally signed in September 2018 between the Church and Beijing authorities on the joint appointment of Catholic bishops in China.

U.S. Secretary of State Mike Pompeo urged Pope Francis not to renew the two-year-old agreement before his visit to the Vatican scheduled for September 29, when he was expected to meet with the pontiff. However, the Italian newspaper La Repubblica, who is very close to the Jesuit Pope, suddenly announced yesterday that the Pope is refusing to meet Pompeo.

The reason seems to be that Pope Francis has already renewed the deal on the appointment of bishops in China in secret , despite U.S. pressure for the Holy See to take a more critical position on Beijing and the Chinese Communist Party  that has increased the persecution of Christians –including Catholics –  since the signing of the infamous agreement.

“It’s clear that the Sino-Vatican agreement has not shielded Catholics from the Party’s depredations, to say nothing of the Party’s horrific treatment of Christians, Tibetan Buddhists, Falun Gong devotees, and other religious believers,” Pompeo said in an article published in U.S. religious magazine First Things last week.

In the meantime, Chinese Foreign Ministry spokesman Wang Wenbin emphatically said last Tuesday in a press conference relating to the Vatican that, “the two sides will continue to maintain close communication and consultation and improve bilateral relations.”

This is an unprecedented move by the Vatican, who seem to be ditching President Trump’s U.S. for Communist China, possibly waiting to see if Joe Biden the pro-China candidate gets elected, and by siding with the Dragon we now know Pope Francis is officially an enemy of the American people and of Christianity at large.

However, on September 30, Pompeo will be meeting with the current Secretary of State, Cardinal Pietro Parolin andArchbishop  Paul Richard Gallagher, who is the current Secretary for Relations with States in the Holy See’s Secretariat of State during the event called, “Advancing and Defending International Religious Freedom Through Diplomacy,” organized by the U.S. Embassy to the Holy See’s symposium.

In the press release, the U.S. embassy to the Holy See stated that:

Religious persecution and restrictions on religious freedom are among the most pressing global human rights concerns today.  Promoting and securing religious freedom is a cornerstone of the United States’ diplomatic relationship with the Holy See.”

Unfortunately, the U.S. embassy to the Holy See is full of Democrats that have been placed there like the ones in Rome during the Obama administration, so Pompeo will have to bypass them to have an honest talk with the Vatican representatives present at the event.

Let’s pray for Mike Pompeo as he ventures into enemy territory.

Tune in Sunday 27 September 2020, 10am PST (11am MT)  THE LEO ZAGAMI SHOW with all the latest from Leo Zagami on the Vatican led New World Order.