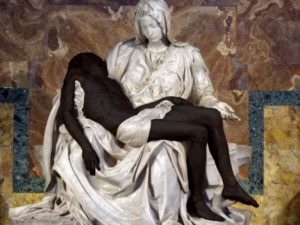 Leo Zagami – “The Piety” (in Italian: La Pietà) by the illustrious artist, Michelangelo Buonarroti, housed in St. Peter’s Basilica in the Vatican, is probably one of the most known sculptures in the world.

The Pontifical Academy for Life members are all named by the Pope, and the decision has already upset many Catholics in Italy who see the Pope’s endorsement in support of what many perceive as a Marxist Movement.

Black Lives Matter was founded by community organizers, and one of the three co-founders stated in 2015 that she and another co-founder “are trained Marxists.”

The official website’s list of beliefs  has drawn criticism as being consistent with Marxism:

“We disrupt the Western-prescribed nuclear family structure requirement by supporting each other as extended families and ‘villages’ that collectively care for one another, especially our children, to the degree that mothers, parents, and children are comfortable.”

Black lives Matter, and Marxists in general, view the living arrangement of the “extended family”as more conducive to fostering collectivism, that’s why the traditional, two-parent nuclear family is depicted as an insidious invention of capitalism, responsible for displacing the communalism of the extended family, yet, the Pope and his Pontifical Academy for Life, are now openly supporting this Marxist organization.

A photomontage of one of Michelangelo’s most famous works of art that depicts the body of Jesus on the lap of his mother Mary after the crucifixion, has substituted the body of a white Jesus with a black Jesus as a designed victim of the persecution.

Michelangelo’s Pietà does not want to speak to the victims and executioners, of hatred between blacks and whites, but of love between men, and the Marxist Pope and his Pontifical Academy for Life should be ashamed of themselves. In the meantime the Pope is not saying anything about the vandalized churches all over the world. In EL PASO, Texas St. Patrick’s Cathedral was vandalized Monday and the 90-year-old statue of the Sacred Heart of Jesus was destroyed.