Your Sins will be revealed!

Numbers 32:23 “But if ye will not do so, behold, ye have sinned against the LORD: and be sure your sin will find you out.” 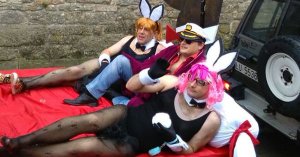 The parish priest from the Galician town of Cuntis has apologized for his “misguided” carnival costume which saw him posing on a float as the Playboy founder along with men dressed as Playboy bunnies.

Juan Carlos Martínez, 40, provoked more than raised eyebrows when he joined the town’s carnival festivities last week and posed on a float dressed as the legendary lothario, complete with dressing gown, captain’s cap and cigar.

At his sides were two rather delectable companions: Two men decked in black leotards over stockings and a barely-there netting skirt and topped off with bunny ears over colourful wigs. Presumably they also had white cottontails pinned to their backsides.

But while such costumes and high jinks are typical at carnival time, Catholic Church authorities were quick to express their dismay at such ill-advised antics.

Read the rest about this Pervert here.