Catholic schoolgirls in Australia taught God is ‘gender-neutral,’ banned from using ‘Father’ and ‘Son’ in prayer 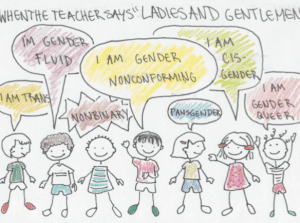 Leah MarieAnn Klett | Christian Post – Some Catholic schoolgirls in Australia are being taught that God is gender-neutral. They’re banned from using the words “Lord,” “Father,” and “Son” in prayers in efforts to be “gender inclusive.”

Top-tier Catholic schools in Brisbane, some of which charge up to $40,000 a year, are teaching their students to use “gender inclusive language” when referring to God, The Sunday Mail reports.

Students at Stuartholme School are taught to use gender-neutral language – including the word “Godself’’ in place of “himself.”

“As we believe God is neither male or female, Stuartholme tries to use gender-neutral terms in prayers … so that our community deepens their understanding of who God is for them, how God reveals Godself through creation, our relationships with others and the person of Jesus,” a spokeswoman said.

Similarly, Loreto College in Coorparoo has removed the word “Lord” from its prayers, as it is regarded as a “male term.”

“Loreto, as a leading school for girls, has a commitment to using inclusive language. There are occasions where gendered language may be appropriate, including references to specific religious and biblical figures,” Principal Kim Wickham said.

According to its website, Loreto’s mission is to “transform the Church and the world particularly by empowering women to seek truth and do justice.”

“This has been an area of growth for us in recent times,” a spokesman told Sunday Times. “We have made changes to a number of prayers to be more gender-inclusive.”

Andrea Dean, Catholic Office for the Participation of Women director, told the Sunday Mail she was “thrilled” that schools were using gender-neutral prayer.

“It’s terrific that they’re sensitive to the implications of how God is named,” she said.

However, Australian Christian lobbyist Lyle Shelton criticized the move, telling the Sunday Mail: “This is further evidence of the agenda of those who sought to ‘de-gender’ marriage – now they want to de-gender religion.”

“In Christian theology, God expresses himself as a father in the male gender. The scriptures clearly explain God to us as a father,” she said.

In recent years, a number of denominations have pushed for more “gender-inclusive” language for God.