This is like BACON to a Muslim or having a dog in their midst! 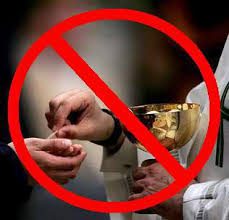 Not being able to take the UN-holy Eucharist signifies being damned to hell which is the fate of all Catholics who believe in that crap anyway!!!

John 8:47 “He that is of God heareth God’s words: ye therefore hear them not, because ye are not of God.”

SPRINGFIELD, Ill. (ChurchMilitant.com) – The Illinois legislature’s recent passage of one of the nation’s most radical abortion laws has prompted the diocese of Springfield to take the extreme measure of denying Holy Communion to nominally Catholic House Speaker Michael Madigan, Senate President John Cullerton and rank-and-file legislators.

“The Eucharist is the most sacred aspect of our Catholic faith,” Springfield’s Bp. Thomas Paprocki said in a diocesan press release, continuing:

As sacred Scripture warns, “Whoever eats unworthily of the bread and drinks from the Lord’s cup makes himself guilty of profaning the body and of the blood of the Lord.” To support legislation that treats babies in the womb like property, allowing for their destruction for any reason at any time, is evil. It’s my hope and prayer these lawmakers reconcile themselves to the Church so they can receive Communion.

In a statement to WGN News, Madigan, a Democrat, acknowledged Bp. Paprocki warned the politician beforehand that he’d be denied Holy Communion if he continued to support the bill.

Rather than yielding to the bishop’s admonition, however, he stated: “The Reproductive Health Act is a recognition that women across Illinois deserve access to health care without intrusion of government.” Read more from one of their own damned to hell websites

Read what the scripture says; 1st Corinthians 11:27-32 “Wherefore whosoever shall eat this bread, and drink this cup of the Lord (take communion), unworthily, (not being Born Again and having your FAITH exclusively in Jesus Christ and NOTHING else) shall be guilty of the body and blood of the Lord. (will be judged harshly) 28 But let a man examine himself (see if there is any confessed sin or if your faith is some where else), and so let him eat of that bread, and drink of that cup. 29 For he that eateth and drinketh unworthily, eateth and drinketh damnation to himself, not discerning the Lord’s body. (what he did for you on the Cross) 30 For this cause many are weak and sickly among you, and many sleep (die prematurely). 31 For if we would judge ourselves, we should not be judged. 32 But when we are judged, we are chastened of the Lord, that we should not be condemned with the world”