2nd Kings 21:2 “And he did that which was evil in the sight of the LORD, after the abominations of the heathen, whom the LORD cast out before the children of Israel.” 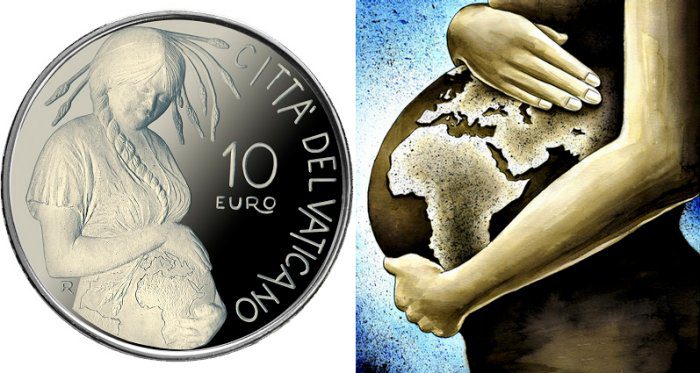 Geoffrey Grider | NTEB – “The Vatican City State Mint will issue a 10 euro silver coin made by Maestro Oldani, depicting a mother carrying the earth in her womb, to whom we owe care and love as if it were a daughter, with long ears of wheat in her hair, in a reference between past and future that becomes timeless, and therefore eternal,” states the official description of the coin. Various media outlets, including the news website owned by the German bishops, made a connection between the coin and the Pachamama statues used in the context of the Amazon synod last year, even though the appearance of “Mother Earth” on the coin differs from the statues used in 2019.

The Vatican City Mint issued a coin depicting a mother carrying the earth in her womb. The issue of the Gaia coin comes almost one year to the day when the idol Pachamama was worshipped in the Vatican gardens in the presence of Pope Francis.

Pope Francis is not a Christian, (and I Jon, will add that faithful Catholics are NOT Christians. There are some Catholics who have become Born Again, and they need to get out of the Whore Church!) obviously, you have to be born again according to John 3:3 and he clearly is not. But let’s got a step further. Pope Francis is not even very much of a Catholic, he spends most of his time going against stated Roman Catholic doctrine. So what is he? Well, he is a New Age pagan who worships and promotes the ‘goddess mother’ of Gaia, and he is so committed to worshiping the ‘mother goddess’ of Gaia, that he just had the Vatican Mint issue a coin in her honor.

Revelation 17:3-4 “So he carried me away in the spirit into the wilderness: and I saw a woman sit upon a scarlet coloured beast, full of names of blasphemy, having seven heads and ten horns. And the woman was arrayed in purple and scarlet colour, and decked with gold and precious stones and pearls, having a golden cup in her hand full of abominations and filthiness of her fornication:”

In 2019, we brought you the story of how Pope Francis held a worship service at the Vatican honoring the female fertility idol called Pachamama, and Catholics got so mad at him that they took the idol and threw it into the river. But Pope Francis, commanding the world’s most-wealthy corporation, had an official coin struck celebrating the female ‘mother goddess’ figure of not only Pachamama, but of all the religions like Gaia that worship a female goddess idol. Pope Francis is showing you who he is, you Catholics should believe him.

FROM LIFE SITE NEWS: “The Vatican City State Mint will issue a 10 euro silver coin made by Maestro Oldani, depicting a mother carrying the earth in her womb, to whom we owe care and love as if it were a daughter, with long ears of wheat in her hair, in a reference between past and future that becomes timeless, and therefore eternal,” states the official description of the coin.

“The celebration of life on earth is a commitment to take care of the planet, a project to which the Church intends to offer its support, a grandiose and complex work that aims: to promote international action to guarantee everyone a future, the food that is needed, both in quantity and quality, so that economic advancement may be accompanied with social development, without which there is no real progress.”

Various media outlets, including the news website owned by the German bishops, made a connection between the coin and the Pachamama statues used in the context of the Amazon synod last year, even though the appearance of “Mother Earth” on the coin differs from the statues used in 2019.

“The coin recalls the Pachamama statues set up at the Amazon synod in the previous year, which according to the prefect of the Vatican communication dicastery, Paolo Ruffini, ‘stand for life, fertility and mother earth’ and should bring the culture of the Amazon region also objectively to the synod,” wrote katholisch.de.

In the fall of 2019, Alexander Tschugguel, a young Austrian Catholic, had thrown a number of the controversial Pachamama statues into the Tiber in Rome after they had been prominently featured in a church in Rome for days.

Similar statues had also been used in a religious ceremony in the Vatican gardens on October 4, 2019. Even Pope Francis blessed one of the statues. At the ceremony, people were bowing down to the ground worshiping the statue. Additionally, the Pope prayed in front of a Pachamama statue at St. Peter’s Cathedral on October 7 and then accompanied it in procession into the synod hall.

The Pope confirmed later that the statue was called “Pachamama” and apologized for the Pachamama statues being thrown into the Tiber river.

Tschugguel himself tweeted earlier today, “We cannot buy those coins and throw them all in the Tiber, we have to fight this on a spiritual level! And we fight it by publicly opposing this #idolatrousness! #Staycatholic #staytrue #fightevil!” READ MORE

During a formal Oct. 4 ceremony preceding the opening of the Pan-Amazonian Synod, Pope Francis clearly blesses a statue that moments before tribal members bowed down to in the Vatican Gardens. Vatican Gardens, Rome, Oct. 4, 2019.