Yes he is along with being a False Prophet and an anti-Christ!

Dutch Priest on Pope Francis: ‘I Rightly Think He Is a Heretic’

CNS News – Rev. Cor Mennen, a retired priest in the Netherlands, recently wrote on his blog that he thinks Pope Francis is a “heretic,” and explained that excessive respect by Catholics towards the papacy is not a virtue given that Christ Himself rebuked the first Pope, St. Peter, ordering him to “Get thee behind me, Satan!”

Please note that Peter was NOT the first pope nor was any other follower of Jesus called a pope. That is a Man-Made Title by fools who follow religion instead of the Gospel of Jesus Christ!!! 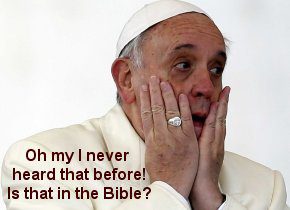 Fr. Mennen, 74, was ordained a priest in 1969. He also holds a degree in ecclesiastical law and is vice chairman of the board of the Latin Liturgy Association. He lives in Vlijmen, east of Rotterdam, still participates in events for the diocese, and is often interviewed on Radio Maria.

In an Oct. 28 blog post, Fr.Mennen criticized some of the pagan events that occurred at the Vatican during the Amazonian synod, such as the veneration of a wooden statue of an Earth goddess named “Pachamama” in the Vatican gardens.

“Many Catholics from high to low have expressed their horror at the blatant violation of the first commandment,” I am the Lord thy God; thou shalt not have strange gods before Me,  said Mennen.

“But the pope himself has now said that it was Pachamama, Mother Earth, the most important goddess of the Andean peoples,” said Fr. Mennen. “He did so, incidentally, as a bishop of Rome, apologizing for the actions of a few courageous Catholics who had taken the Pachamama idols out of the church and thrown them into the Tiber [river].”

“The pope actively promotes Marxist liberation theology, which his predecessors condemned as non-Catholic,” said Fr. Mennen. “Also, in the politics of Italy, he clearly takes a stand for the socialists and against Catholic politicians who want to regulate the flow of migrants.”

“Left-wing globalist, pro-abortion politicians are invited to the synod and enter and leave the Vatican,” said the priest.  “Great faith in communism is also evident from the deal with the Chinese where loyal Catholics have been betrayed to the communist system despite the warnings of Cardinal Zen. … This is all the deliberate work of Francis.”

Fr. Mennen continued, “There are many believers and priests who have had their fill of this pope, who is only sowing division and confusion; who is believed and praised by the non-Catholic press and anti-Catholic politicians, not for his spiritual leadership but for his support for their left-liberal political agenda.

“In the meantime the Church is emptied where this ‘papal faith’ is preached like the churches emptied in the Netherlands in the seventies and eighties of the last century,” said Fr. Mennen.

In concluding his blog post, Fr. Mennen quoted a letter he had received from a fellow priest expressing his difficulty in believing that the Pope is a faithful Catholic and how that affects his prayers for the Pope. “I feel like I am lying to God” during the Eucharistic prayer at Mass, wrote the priest.

Fr. Mennen replied, “I understand your reservation in regard to our current Pope very well — and not only me.  I know quite a few priests in our diocese who have fundamental objections to this pope. This is also freely discussed in certain meetings of priests. I don’t know how to proceed.”  Read more here