The False Prophet is setting the stage for the anti-Christ and this is just part of the Abomination!

amredeemed.com – Pope Francis has come under fire by Church officials and sex abuse survivors for cutting the penalties for pedophile priests. 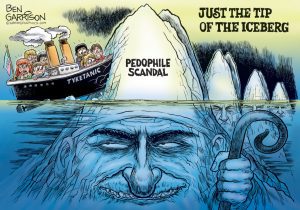 The DailyMail Reports: It has been revealed by church officials that Pope Francis overruled advice given to him by the Vatican Congregation for the Doctrine of the Faith about two priests – allowing them to be punished by a lifetime of prayer.

However, he appealed, and in 2014 Francis reduced the penalty to a lifetime of prayer, prohibiting him from celebrating Mass in public or being near children, barring him from his diocese and ordering five years of psychotherapy.

Rev Inzoli was then convicted by an Italian criminal court for his sex crimes against five children as young as 12.He is now facing a second church trial after new evidence emerged against him.

.They said: ‘With all this emphasis on mercy … he is creating the environment for such initiatives.’ Marie Collins, an abuse survivor and founding member of Francis’ sex-abuse advisory commission, expressed dismay that the congregation’s recommended penalties were being weakened.

She said: ‘All who abuse have made a conscious decision to do so. Even those who are paedophiles, experts will tell you, are still responsible for their actions. They can resist their inclinations.’

Many canon lawyers and church authorities argue that defrocking paedophiles can put society at greater risk because the church no longer exerts control over them.They argue that keeping the men in restricted ministry, away from children, enables superiors to exert some degree of supervision.