Pope Francis Tells 600,000 Catholics In Panama City That Mary Was The ‘Biggest Influencer’ In World History

“The young woman of Nazareth didn’t appear in the social networks of the time, she wasn’t an influencer, but without wanting it or seeking it, she became the woman that had the biggest influence in history,” Pope Francis said during a World Youth Day address in Panama City on Saturday. Organizers estimated about 600,000 people attended a main event of the festival east of Panama City, according to the Associated Press.

Pope Francis invited a crowd of young Catholics gathered in Panama City to follow the footsteps of the Virgin Mary, calling her the biggest “influencer” of all times.

NTEB – Just when I think that the leader of the world’s 1.4 billion Catholics can’t get any more unbiblical, he throws me a curveball just to show me he can still run with the best of the pagans. At an event in Panama City, attended by well over half a million young Catholics, Pope Francis lifted Mary to heights that neither she nor God ever dreamed she would attain. Pope Francis has made her to be a combination of  Wonder Woman, super-human and the fourth part of the Trinity all in one. There’s no end to tall tales, it would seem.

“The children gather wood, and the fathers kindle the fire, and the women knead their dough, to make cakes to the queen of heaven, and to pour out drink offerings unto other gods, that they may provoke me to anger. Do they provoke me to anger? saith the LORD: do they not provoke themselves to the confusion of their own faces?” Jeremiah 7:18,19 (KJV)

Jesus was and is the world’s most influential person, so influential in fact that the world calendar of BC and AD is configured around the time leading up to His birth, and the time after His ascension back to Heaven. What Jesus did on the cross influenced the lives of everyone, believer and unbeliever alike, who will ever live on this Earth at any moment in any time that will ever be recorded in human history. The influence that Jesus has had on everything is so all-pervasive that there is no other human being that can come within a billion miles of Him. And that includes the biblical Mary.

“For they provoked him to anger with their high places, and moved him to jealousy with their graven images. When God heard this, he was wroth, and greatly abhorred Israel:” Psalm 78:58, 59 (KJV)

The popes ridiculous statements do not honor the biblical Mary, they belittle her and make her at the very least seem silly, and at the worst turn her into a pagan idol. In researching this article I did a Google search on “pope francis kissing virgin mary statue‘ and was flooded with unbelievably cringe-inducing images of old Frankie boy kissing statues of Mary, bowing to statues of Mary, and bringing flowers to statues of Mary. That’s what pagans do, they worship before statues and graven images and ask for their blessing. God hates this and is 100% against it. Mary hates it, too.

FROM BLOOMBERG: “The young woman of Nazareth didn’t appear in the social networks of the time, she wasn’t an influencer, but without wanting it or seeking it, she became the woman that had the biggest influence in history,” Pope Francis said during a World Youth Day address in Panama City on Saturday.

Organizers estimated about 600,000 people attended a main event of the festival east of Panama City, according to the Associated Press. Many spent the night in tents or on sleeping mats ahead of an early morning final Mass to end the religious festival. 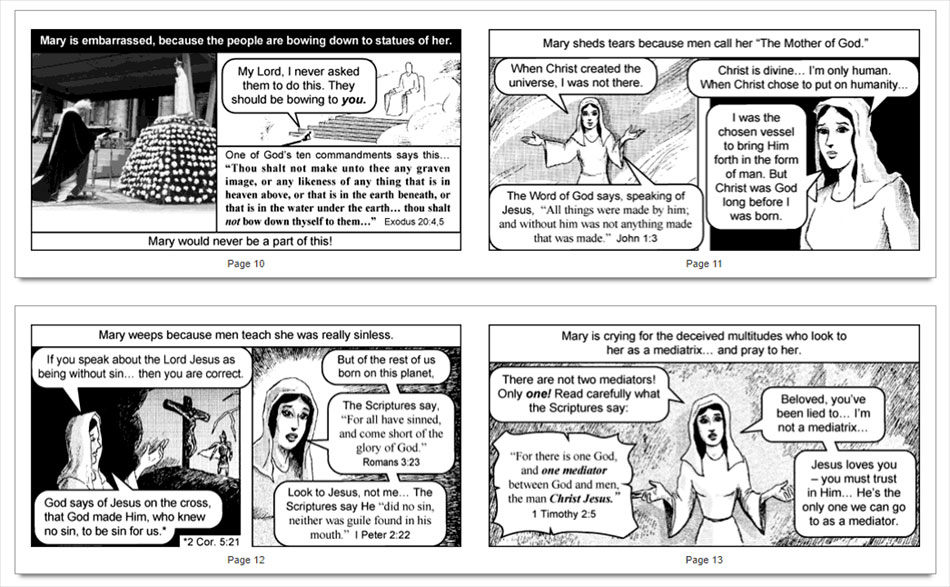 After riding through the cheering crowds in his popemobile, Francis said he understood their anxieties and fears for a future where jobs are scarce and education not always available, the AP reported.

The vigil ended a busy day that included a luncheon with 10 young pilgrims representing each of the continents. The young people said they were surprised at Francis’ informality and interest in their questions, according to the report. READ MORE

The Catholic Cult Of Mary

Posted with permission from Now the End Begins