VERONA, Italy (ChurchMilitant.com) – A pedophile priest wanted by Argentine authorities was found freely walking the streets in Verona on Wednesday.

Father Eliseo Pirmati, 83, is one of the priests involved in the sexual abuse of deaf and mute minors at the Provolo Institute in Argentina (La Plata and Mendoza) and Italy (Verona). 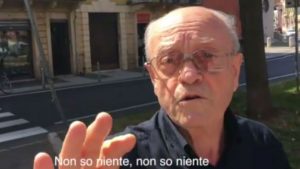 Pirmati, an Italian priest sent to the Provolo Institute in La Placa in 1974, has been credibly accused of gruesomely abusing deaf minors.

Jorge Moya Panisello, the judge of La Placa, issued an arrest warrant dated April 23, 2019 for Pirmati, who is being charged for repeatedly forcing deaf children entrusted to the institute’s care to perform obscene sexual acts and corrupting minors; however, when the police arrived at the location, the pedophile priest was already gone.

Pirmati had absconded to Verona, Italy in December 2017.

A journalist working for L’Espresso confronted Pirmati as the pedophile priest fugitive was leaving Santa Teresa degli Scalzi in Verona after attending Mass.

Disclaimer: I link to the website for news only. You should NOT heed any Doctrine or Spiritual Advice from a Catholic