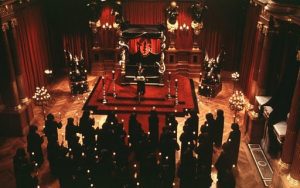 Leo Zagami – Finally, the mockery that researchers, including myself, have suffered for many years is finally coming to an end with the growing number of court cases against the Catholic Church worldwide. As I wrote in my latest book, Confessions of an Illuminati vol.6.66,a public inquiry in Scotland has found that nuns, priests, and staff at two Scottish children’s homes were subjecting children to regimes of fear, physical, and sexual abuse for many decades. Two days ago, the BBC reported that a witness of the independent Scottish Child Abuse inquiry has confirmed in front of Lady Smith, the commission’s chair, that he was raped by Catholic priests during Satanic alcohol-fuelled sex parties.

The BBC seems to have changed their stance, as in the past they were often accused of bias towards pedophiles, especially after their own scandals that include the infamous Jimmy Savile. The victim in question, Dave Sharp, described a horrifying scenario made up of sexual, physical, and emotional violence at St Ninian’s in Falkland, Fife, between 1971 and 1975. Mr. Sharp, from Glasgow, said the abuse left him with “lifelong trauma.”The inquiry reported by the BBC is investigating in detail abuse of children in residential care in Scotland on a historic level, and not surprisingly, it seems to have also involved Ireland. Mr. Sharp urged inquiry chairwoman Lady Smith to piece together the “jigsaw”of victims’ accounts and called for a “national discussion”on the subject that seems rather difficult in a country full of politicians that practice or support pedophilia.

The 60-year-old victim was put into care after his mother died when he was aged one. He stayed in several institutions before going to the Catholic-run care home in Fife. He stated that he was groomed by one of the religious brothers, who would tell him he loved him which, “no-one had ever done”before. The inquiry revealed that the then-12-year-old was later raped. Most of the abuse was said to have taken place in the shower rooms where the witness would be made to stand in the dark through the night as punishment. One specific attack came after he asked about the whereabouts of a friend who had disappeared. It was later discovered the boy had taken his own life, but it could be that he was silenced after being abused by the Catholic Satanic clergy.

Mr. Sharp said he was taken to the shower room by a drunken religious brother. Shockingly enough, the witness claimed he was then hung by a cord, threatened with murder if he spoke out and was then raped by the Satanists, adding : “It was from that day everything I did was under his complete and utter control.”The inquiry also stated that “two or three” boys were trafficked around Scotland and Ireland to be used in alcohol-fuelled sex parties, which he described as “Satanic.”On one occasion in Ireland, Mr. Sharp said he was involved with ten men who took turns raping the boys, and that Catholic priests were among those involved. These incidents took place over the duration of his time at St Ninian’s, which was run by the Congregation of Christian Brothers, a worldwide religious community within the Catholic Church.

He left the home at aged 16 without “any memory other than continually being abused”.It was then that he found out he had a family, but unfortunately he became dependent on drugs and alcohol like most victims of pedophilia. He said he struggled with a “£100-a-day”habit for up to 25 years and attempted to kill himself on numerous occasions. This also happened to some of the victims related to the infamous Cardinal Pell. Mr. Sharp eventually decided to “turn his life around”and is now helping the inquiry that will continue this Tuesday before Lady Smith. Let us pray that more can be done to fight the huge number of Satanists that have infiltrated the Catholic Church from 1966 after the Second Vatican Council made it easy for them to do so in order to facilitate the Satanic take over of the Catholic Church.