Uh, no pervert, he does NOT. Maybe in his False Man-Made Pagan Religion he, Lucifer does. But in the True church, and according to the Word of God, Homosexuals and other Ilk are like tares in the midst of the wheat and will be burned up when the harvest comes! 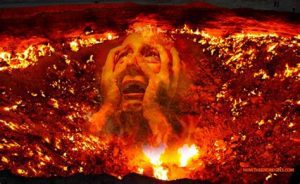 Matthew 13:24 ” Another parable put he forth unto them, saying, The kingdom of heaven is likened unto a man which sowed good seed in his field: 25 But while men slept, his enemy came and sowed tares among the wheat, and went his way. 26 But when the blade was sprung up, and brought forth fruit, then appeared the tares also. 27 So the servants of the householder came and said unto him, Sir, didst not thou sow good seed in thy field? from whence then hath it tares? 28 He said unto them, An enemy hath done this. The servants said unto him, Wilt thou then that we go and gather them up? 29 But he said, Nay; lest while ye gather up the tares, ye root up also the wheat with them. 30 Let both grow together until the harvest: and in the time of harvest I will say to the reapers, Gather ye together first the tares, and bind them in bundles to burn them: but gather the wheat into my barn.”

You Sexual Deviates may hang around in the church building and be accepted by some, but be assured that you will be ” bundled” up and cast in to the Lake of Fire!

VATICAN CITY (RNS) — Now more than ever, the Catholic Church has begun to address how to minister to members of the LGBT community, especially when it comes to spiritual guidance. Following in Pope Francis’ footsteps, an Italian archbishop invited Catholics to look at gays and lesbians “as God looks at them.”

“When communities will truly begin to look at people as God looks at them, then homosexual people — and everybody else — will begin to feel, naturally, a part of the ecclesial community,” said Cardinal Matteo Maria Zuppi, the archbishop of the northern Italian town of Bologna, in the preface of a newly released book.

Pause! Yes, Jesus ate with and hung around sinners (Matthew 9:11-13) and the dregs of society. But he did NOT condone what they did. He told them the TRUTH and preached against their Sin. He also cast out those foul demons that cause sexual perversion!

The book, “Church and Homosexuality: An Inquiry in Light of Pope Francis’ Magisterium,” was written by Luciano Moia, the chief editor at the monthly magazine on family published by the Italian Bishops’ Conference. The book is hitting the shelves this week in Italy.

The Catholic Church considers gay and lesbian relationships as “intrinsically disordered” and does not recognize marriage between two people of the same sex. But starting with his famous quote “Who am I to judge?” in 2013, Pope Francis has promoted a more inclusive stance toward homosexuality in the Catholic Church. In his 2016 document on the family, “Amoris Laetitia” (the Joy of Love), Francis called for the need to come alongside members of the LGBT community, a position he has reiterated several times since.

Pause again. WE as Christian must judge. We can’t judge a person as far as condemning them to hell, but we just judge their fruits and actions!  See  Judging Others

In the preface of his book, Moia interviews the archbishop on how to best put in practice Pope Francis’ appeals to offer spiritual guidance and welcome members of the LGBT community.

“The Pope, and the Church with him, isn’t interested in leading people to follow external rules,” Zuppi said. “His interest is in helping people do the will of God; meaning to enter a personal relationship with God and hear from him the appropriate Word for each life.”

Catholic communities, he said, often fail in listening to the needs of people from different walks of life. He voiced the need to not define a person based on a single characteristic.

“We mustn’t relativize the law,” he said, “but make it relevant to the concrete person, with their own peculiarities.”

Pause again. We are NOT under law nor are we under the edicts and commands of the Catholic church. You follow the Word of God and nothing else!

When asked about creating spiritual guidance programs tailored specifically to members of the LGBT community, Zuppi said it’s more important to have a “specific outlook on people,” regardless of their characteristics.

“As Christians we must look at the person as a child of God, meaning with the full right to receive, feel and experience the love of God just as any other child of God,” he said.

Regardless of the Catholic Church’s position on homosexuality, Zuppi specified that the doctrine distinguishes between sexual orientation and homosexual acts.

“What we cannot ‘welcome’ is the sin expressed in an act,” he said. “Sexual orientation – which nobody ‘chooses’ – isn’t necessarily an act. Also, it’s not separable from the identity of the person; by welcoming a person we cannot overlook their (sexual) orientation.”

Finally, the archbishop warned that even if an individual leads a lifestyle that is not approved of by the Catholic Church, this cannot mean that the person is not to be welcomed. At least, Jesus didn’t think so.

“If Jesus had this criterion, he would have required the conversion of Zacchaeus,” Zuppi said, referring to the sinner and tax collector in the Gospel of Luke. “Before accompanying the Samaritan to the adoration of God in Spirit and Truth, he would have asked her to regularize her marital situation. … Did Jesus act this way?”

What is the Parable of the Wheat and the Tares?

Got Questions – The Parable of the Wheat and the Weeds, or Tares, is filled with spiritual significance and truth. But, in spite of the clear explanation of the parable that Jesus gave (Matthew 13:36-43), this parable is very often misinterpreted. Many commentaries and sermons have attempted to use this story as an illustration of the condition of the church, noting that there are both true believers (the wheat) and false professors (the weeds) in both the church at large and individual local churches. While this may be true, Jesus distinctly explains that the field is not the church; it is the world (v. 38).

Even if He hadn’t specifically told us the world is the setting of the story, it would still be obvious. The landowner tells the servants not to pull up the weeds in the field, but to leave them until the end of the age. If the field were the church, this command would directly contradict Jesus’ teaching in Matthew 18, which tells us how to deal with unrepentant sinners in the church: they are to be put out of the fellowship and treated as unbelievers. Jesus never instructed us to let impenitent sinners remain in our midst until the end of the age. So, Jesus is teaching here about “the kingdom of heaven” (v. 24) in the world.

In the agricultural society of Christ’s time, many farmers depended on the quality of their crops. An enemy sowing weeds would have sabotaged a business. The tares in the parable were likely darnel because that weed, until mature, appears as wheat. Without modern weed killers, what would a wise farmer do in such a dilemma? Instead of tearing out the wheat with the tares, the landowner in this parable wisely waited until the harvest. After harvesting the whole field, the tares could be separated and burned. The wheat would be saved in the barn.

In the explanation of parable, Christ declares that He Himself is the sower. He spreads His redeemed seed, true believers, in the field of the world. Through His grace, these Christians bear the fruit of the Spirit (Galatians 5:22-24). Their presence on earth is the reason the “kingdom of heaven” is like the field of the world. When Jesus said, “The kingdom of heaven is at hand” (Matthew 4:17; Mark 3:2), He meant the spiritual realm which exists on earth side by side with the realm of the evil one (1 John 5:19). When the kingdom of heaven comes to its fruition, heaven will be a reality and there will be no “weeds” among the “wheat.” But for now, both good and bad seeds mature in the world.

The enemy in the parable is Satan. In opposition to Jesus Christ, the devil tries to destroy Christ’s work by placing false believers and teachers in the world who lead many astray. One has only to look at the latest televangelist scandal to know the world is filled with professing “Christians” whose ungodly actions bring reproach on the name of Christ. But we are not to pursue such people in an effort to destroy them. For one thing, we don’t know if immature and innocent believers might be injured by our efforts. Further, one has only to look at the Spanish Inquisition, the Crusades, and the reign of “Bloody Mary” in England to see the results of men taking upon themselves the responsibility of separating true believers from false, a task reserved for God alone. Instead of requiring these false believers to be rooted out of the world, and possibly hurting immature believers in the process, Christ allows them to remain until His return. At that time, angels will separate the true from false believers.

In addition, we are not to take it upon ourselves to uproot unbelievers because the difference between true and false believers isn’t always obvious. Tares, especially in the early stages of growth, resemble wheat. Likewise, a false believer may resemble a true believer. In Matthew 7:22, Jesus warned that many profess faith but do not know Him. Thus, each person should examine his own relationship with Christ (2 Corinthians 13:5). First John is an excellent test of salvation.

Jesus Christ will one day establish true righteousness. After He raptures the true church out of this world, God will pour out His righteous wrath on the world. During that tribulation, He will draw others to saving faith in Jesus Christ. At the end of the tribulation, all unbelievers will be judged for their sin and unbelief; then, they will be removed from God’s presence. True followers of Christ will reign with Him. What a glorious hope for the “wheat”!