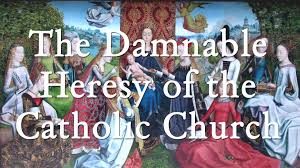 In his weekly streamed Regina Caeli address, the pope drew inspiration from the gospel reading for the day that presents Jesus as the Good Shepherd, who gives his life for his sheep and whose sheep recognize his voice.

“These different voices resonate within us. There is the voice of God, who kindly speaks to conscience, and there is the tempting voice that leads to evil,” Francis said.

“How can we discern the voice of the Good Shepherd from that of the thief, how can we distinguish the inspiration of God from the suggestion of the evil one?” he asked. “You can learn to discern these two voices: in fact, they speak two different languages, that is, they have opposite ways of knocking on our heart.”

The pope can’t discern anything. If he could, then he would NOT be a Catholic and push the false pagan religion and false doctrine!

1st Corinthians 2:14-16 “But the natural man receiveth not the things of the Spirit of God: for they are foolishness unto him: neither can he know them, because they are spiritually discerned.15 But he that is spiritual judgeth all things, yet he himself is judged of no man.16 For who hath known the mind of the Lord, that he may instruct him? But we have the mind of Christ.”

The pope does NOT have the mind of Christ, but rather the mind of, and hears from the Devil!

The voice of the devil “seduces, assails, and forces; it arouses dazzling illusions, tempting but passing emotions,” the pope said. “At first it coaxes, making us believe we are omnipotent, but then leaves us empty inside and accuses us: ‘You are worthless.’”

“The voice of God, on the other hand, corrects us, with much patience, but always encourages us, consoles us: it always nourishes hope,” the pontiff continued. “The voice of God is a voice that opens new horizons while the voice of the evil one leads to a wall, to a dead end.”

How about all of those drunken Pedophile priests? Is he seducing those perverts? You Catholics are protecting them and have been for decades! Who’s voice are they hearing EHH Mr. false prophet?

Francis said that the devil seeks to distract people from living in the present by stoking fears of the future or sadness for the past.

“The voice of God, on the other hand, speaks in the present,” the pope said. “Now you can do good, now you can exercise the creativity of love, now you can give up the regrets and remorse that hold your heart prisoner.”

The two voices also raise different questions, he continued. God will encourage us to explore what is truly good for us, while Satan will urge us to simply ask what we feel like doing.

You Catholics feel like getting drunk, fornicating and molesting children. Is that of God?

“The evil voice always revolves around the self, its drives, its needs, everything, and immediately. It is like children’s whims: I want everything and I want it now,” Francis said. “The voice of God, on the contrary, never promises cheap happiness. It invites us to go beyond our selves to find true good and peace.”

Finally, the pope concluded, the voice of God and that of the tempter seek different “environments” in which to speak.

At this time when many thoughts and worries lead us to into a time of self-examination, “let us pay attention to the voices that reach our heart,” he said. “Let us ask where they come from. Let us ask for the grace to recognize and follow the voice of the Good Shepherd, who brings us out of the realm of selfishness and leads us to the pastures of true freedom.”