Pope Francis Preaching Socialism Saying That Illegal Immigrants Have A Right To The Lands, Goods And Services Of All Nations They Enter Into 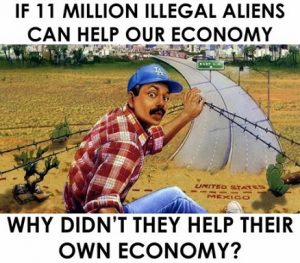 Geoffrey Grider | NTEB – In a new encyclical letter titled Fratelli Tutti (Brothers All), the pope asserts that the common destination of the earth’s goods “requires that this principle also be applied to nations, their territories and their resources.” “Seen from the standpoint not only of the legitimacy of private property and the rights of its citizens, but also of the first principle of the common destination of goods,” the pontiff writes, “we can then say that each country also belongs to the foreigner, inasmuch as a territory’s goods must not be denied to a needy person coming from elsewhere.”

Pope Francis in Fratelli Tutti has proposed “a different way of understanding relations and exchanges between countries” that minimizes the idea of citizenship in a particular nation and emphasizes the common humanity of all people.

The question is not is Pope Francis a Socialist, the real question is he also a Marxist? Because the Jesuit pope from Argentina talks like a card-carrying commie, saying that illegal immigrants have the right to enter any country they choose, and take whatever resources they need, free of charge. Fratelli Tutti. Are you kidding me? But no, sadly, he is not kidding.

“And upon her forehead was a name written, MYSTERY, BABYLON THE GREAT, THE MOTHER OF HARLOTS AND ABOMINATIONS OF THE EARTH. And I saw the woman drunken with the blood of the saints, and with the blood of the martyrs of Jesus: and when I saw her, I wondered with great admiration.” Revelation 17:5,6 (KJB)

No one has a “right” to take something from someone else that doesn’t belong to them, that is the Socialist nonsense of the radical Left. For example, when someone is taken to the ER here in America, an illegal immigrant say, that person will receive life-saving medical care at no charge to them. That is not because they have a “right” to free medical care, it is because America is a compassionate nation. But medical care and hospital stays cost money, and the people who provide that care are paid salaries, and as such, they deserve to be compensated for their time, goods and services. It is Socialism that says otherwise.

Some brave Catholic should stand up to Pope Francis, and call him out for the fraud that he is, at the very least he is a Socialist and at the worst an out and out Communist. The truth is, not only are illegal immigrants not entitled to the “goods of the land” of other nations, they are not even entitled to enter into that country if the host nation turns them down.

Pope Francis: ‘Each Country also Belongs to the Foreigner’

FROM BREITBART NEWS: In a new encyclical letter titled Fratelli Tutti (Brothers All), the pope asserts that the common destination of the earth’s goods “requires that this principle also be applied to nations, their territories and their resources.”

“Seen from the standpoint not only of the legitimacy of private property and the rights of its citizens, but also of the first principle of the common destination of goods,” the pontiff writes, “we can then say that each country also belongs to the foreigner, inasmuch as a territory’s goods must not be denied to a needy person coming from elsewhere.”

“If every human being possesses an inalienable dignity, if all people are my brothers and sisters, and if the world truly belongs to everyone,” he writes, “then it matters little whether my neighbour was born in my country or elsewhere.”

“My own country also shares responsibility for his or her development, although it can fulfil that responsibility in a variety of ways,” he adds. “It can offer a generous welcome to those in urgent need, or work to improve living conditions in their native lands by refusing to exploit those countries or to drain them of natural resources, backing corrupt systems that hinder the dignified development of their peoples.”

Justice among nations, the pontiff suggests, requires assistance to satisfy the “right to progress” of peoples outside one’s own country, and perhaps even the pardoning of international debt.

“Indeed, justice requires recognizing and respecting not only the rights of individuals, but also social rights and the rights of peoples,” Francis writes. “This means finding a way to ensure the fundamental right of peoples to subsistence and progress, a right which is at times severely restricted by the pressure created by foreign debt.”

“In many instances, debt repayment not only fails to promote development but gravely limits and conditions it,” he states. “While respecting the principle that all legitimately acquired debt must be repaid, the way in which many poor countries fulfil this obligation should not end up compromising their very existence and growth.”

“Certainly, all this calls for an alternative way of thinking,” the pope acknowledges. “Without an attempt to enter into that way of thinking, what I am saying here will sound wildly unrealistic.”

“On the other hand, if we accept the great principle that there are rights born of our inalienable human dignity, we can rise to the challenge of envisaging a new humanity,” he proposes. “We can aspire to a world that provides land, housing and work for all.” READ MORE