Pelosi: ‘As a Catholic, I Resent Your Using the Word Hate in a Sentence That Addresses Me’

See the proof she is a Practicing Witch here 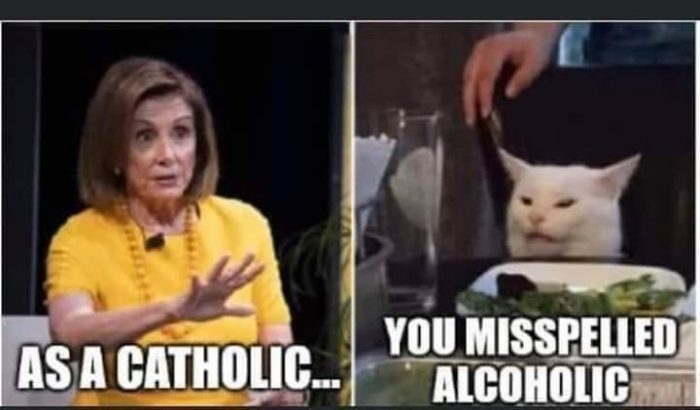 (CNSNews.com) – Responding to a question from James Rosen of Sinclair Broadcasting, who asked her if she hated President Trump, House Speaker Nancy Pelosi (D.-Calif.) invoked her Catholic faith and said she did not hate anyone and, in fact, “prayed for the president all the time.”

Pelosi made these remarks after she had begun walking off the stage at the end of her press briefing today. As she did so, Rosen addressed his question to her.

She stopped and started walking toward the reporter, pointing at him with her finger.

A moment later, Pelosi stepped back to the microphone at the podium and continued her response.

After describing the president as a “coward” and “cruel” because of some of the policies she disagrees with him on, Pelosi talked about her faith.

“So don’t mess with me when it comes to words like that,” Pelosi said. Read more here

Pelosi: Impeachment Has Been Going on ‘Two and a Half Years, Actually’

Breitbart News – On Tuesday in Washington, D.C., at Politico’s Women Rule Summit, House Speaker Nancy Pelosi (D-CA) admitted the impeachment process of President Donald Trump has been going on for “two and a half” years.

When asked about criticisms of “the speed” of the House Democrats impeachment, Pelosi replied, “Speed? It’s been going on 22 months—two and a half years, actually.”

She continued, “I think we are not moving with speed. Was it two a half years ago they initiated the Mueller investigation? It’s not about speed. It’s about urgency. One of the charges against the president of the United States—saying he was violating the oath of office by asking for government to interfere in our election undermining the integrity of our elections.” Read more here

WASHINGTON (ChurchMilitant.com) – House Speaker Nancy Pelosi is getting backlash for again declaring she is Catholic — this time in response to a reporter who asked if she hates President Trump.

Sinclair Broadcasting reporter James Rosen posed this question after her impeachment update delivered at the Capitol on Thursday: “Do you hate the president, Madame Speaker?”

“So don’t accuse me,” she said, to which Rosen said, “I did not accuse you. … I asked a question. Read more here

House Speaker Nancy Pelosi said she is praying for President Donald Trump Thursday, marking the second time in a week that she offered her prayers for the president.

“Again, I pray for the president of the United States,” Pelosi said Thursday on Capitol Hill. “I wish that his family or his administration or his staff would have an intervention for the good of the country.”