Leo Zagami – A couple of days ago, the Vatican bank announced that they must now undergo a mandatory external audit. Pope Francis approved new statutes for the Institute for the Works of Religion, often referred to as the Vatican bank, that include structural changes and a mandatory external audit, after years of criticism over the secretive and illegal nature of activities going on in many of their accounts. The Vatican has been laundering money for the Mafia and the Illuminati elite,  including many Hollywood names and Silicon Valley tycoons, for a long time. 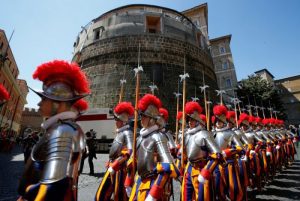 In 2015, the Council of Europe’s financial-evaluation arm, Moneyval, laid down the law for the Vatican Bank, telling the rather unholy financiers, who had been accused of money laundering for years, that it isn’t enough to just smoke out suspicious account holders and freeze assets. Instead, they said they needed to start prosecuting criminal cases.

Three years earlier, in 2012, an official request to investigate such matters  was made by the Italian authorities to the Institute for Religious Works, but of course they refused to disclose any records of the account in question held by Father Ninni Treppiedi– who is currently suspended from serving as a priest, but still under Vatican control. Investigators wanted to know more about vast sums of money that are said to have passed through his account to establish if they were money laundering operations run by Mafia Godfather, Matteo Messina Denaro, but they failed in their mission.

Matteo Messina Denaro has been on the run from law enforcement since June, 1993. With hundreds of people and millions of euro being spent to catch him, Matteo Messina Denaro is the most important and elusive Mafia fugitive, the last Cosa Nostra boss still at large protected by the Vatican.

The reports on this particular investigation connecting him with the Institute for Religious Works emerged in the Italian media and came just two weeks after the head of the Vatican Bank, Ettore Gotti Tedeschi, was sacked amid claims of corruption within the Holy See which have been linked to the leaking of sensitive documents belonging to the now, Pope Emeritus, Benedict XVI.

So will this new reform of the Vatican bank solve corruption? Apparently, the renewed statutes, which were approved by the Pope “ad experimentum”(on a trial basis) for two years, were published by the Vatican press office two days ago, on August 10, 2019, as a new propaganda stunt to help the image of this controversial institution. In a document signed by the Jesuit Pope on August 8,2019, the Pontiff emphasized the changes were to reinforce the Vatican bank’s intended mission to manage assets for “the works of religion or charity.”

Among the primary changes to the statutes is the inclusion of an external auditor which, according to the document, can be either an individual or a company that is proposed by the Institute’s supervisory board and appointed by the Commission of Cardinals overseeing the institute’s work.  So nothing will change, if only on the surface, of this secretive and powerful institution controls and monitors the so-called “external auditor” in all its investigations. However, the new statutes state that he will,“express opinions on the institute’s financial statements in a special report” and “examine all the books and accounting documents.”The auditor may also “request any information useful for auditing activities.”

The new norms also increase the number of members of the Board of Superintendence from five to seven members. In an article published in the Vatican News on August 10, by Andrea Tornielli, the new spin master for the Dicastery for Communication said the increase makes it easier for board members to, “fulfill their responsibilities, even if they are divided into advisory committees according to the subject matter being dealt with.”

Tornielli, who is the guy in charge of Vatican propaganda, also said that the renewal of the statutes,“represents an important step in the process of adaptation to the highest international standards.”

“More importantly, it signifies a renewed fidelity to the original mission of the Institute for the Works of Religion,”he said. “The renewed statutes show greater attention to guaranteeing management responsibilities, control, and supervision.”

In recent years, the Vatican has been forced to clean up their image, but we all know they should close down the Institute for the Works of Religion as the late Pope John Paul I wanted to do. Unfortunately, he was killed by high-ranking members of the curia who were Freemasons and others who had a role in the laundering of mafia drug money through the infamous Vatican bank.