NUNS forced a girl to take part in a ‘satanic’ sex ritual at an orphanage, the child abuse inquiry heard yesterday. 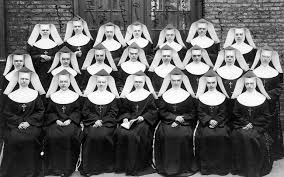 A former Smyllum Park resident known only as ‘Janie’ told the probe a man referred to as the “devil” assaulted her while she lay on a slab surrounded by candles. 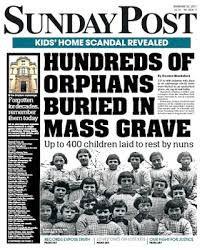 See this: At least 400 children from Smyllum Park Orphanage in Lanark are thought to be buried in an unmarked grave at the town’s St Mary’s Cemetery.

She said before the alleged attack, she and other girls were taken from their dorms at night to a nearby field where Catholic sisters from the “cult-like” home danced in a circle around a tree.

The inquiry heard they were later taken to the back of a candlelit chapel and went downstairs.

Janie, of primary school age at the time, said: “There was a square slab and everyone sat round.

“I was given a lollipop and told that the devil was coming out.”

She said she was assaulted then taken back outside and “buried alive” in a drain all night.

After she was let out the next morning, she said she was put in a “blood bath” — believed to be filled with coloured dye — as part of a terrifying ritual.

he witness also told the Edinburgh probe a nun forced her to perform a sex act on a woman at a house near the Lanark orphanage.

She also said she was tied to her bed and beaten and warned not to speak about her ordeal.

And she claimed she was regularly gagged and had her hair cut off.

She only told police about what she had endured years later.

Janie said: “It was like a cult. We deserve justice. People who abused me should be taken to court and jailed.

“Police say they are old and frail. They forget we were frail as kids and too weak to fight back.

“They’re sitting back and thinking they’ve got away with it.”

Today’s claims, dating back to the 1960s, were heard as part of the Scottish Child Abuse Inquiry.

The long-running probe before Lady Smith is expected at a later to date to examine claims that the bodies of at least 400 children were buried in an unmarked mass grave near Smyllum Park.

The orphanage, run by the Daughters of Charity of St Vincent de Paul, closed in 1981.