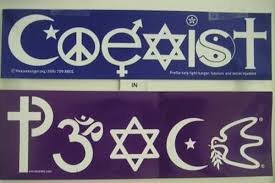 Jihad Watch – Note that the National Catholic Reporter’s Ra’fat Al-Dajani uncritically repeats the Hamas-linked Council on American-Islamic Relations’ claims about “anti-Muslim hate crimes,” without mentioning how often these “hate crimes” turn out to have been perpetrated by Muslims themselves (scroll down at that link to find many examples).

Ra’fat Al-Dajani also leaves out a few passages of the Qur’an which hapless National Catholic Reporter readers might find illuminating as they search for common ground with Islam. These include:

Jesus is not the Son of God and belief in the Trinity is “excess”: “O People of the Book! Do not exaggerate in your religion nor utter anything concerning Allah save the truth. The Messiah, Jesus son of Mary, was only a messenger of Allah, and his word which he conveyed to Mary, and a spirit from him. So believe in Allah and His messengers, and do not say ‘Three.’ Cease! It is better for you! Allah is only One Allah. It is far removed from his transcendent majesty that he should have a son. His is all that is in the heavens and all that is in the earth. And Allah is sufficient as Defender.” — Qur’an 4:171

Jesus was not crucified: “And because of their saying: We killed the Messiah, Jesus son of Mary, Allah’s messenger – they did not kill him or crucify him, but it appeared so to them; and those who disagree concerning it are in doubt about it; they have no knowledge of it except pursuit of a conjecture; they did not kill him for certain.” — Qur’an 4:157

Those who believe in the divinity of Christ are unbelievers: “They have certainly disbelieved who say that Allah is Christ, the son of Mary.” — Qur’an 5:17 (cf. 5:72)

Christians have forgotten part of the divine revelations they received: “From those, too, who call themselves Christians, We did take a covenant, but they forgot a good part of the message that was sent them: so we estranged them, with enmity and hatred between the one and the other, to the day of judgment. And soon will Allah show them what it is they have done.” — Qur’an 5:14

Those who believe that Jesus is God’s Son are accursed: “The Jews call Ezra a son of Allah, and the Christians call Christ the son of Allah. That is a saying from their mouth; they but imitate what the unbelievers of old used to say. Allah’s curse be on them: how they are deluded away from the Truth! ” — Qur’an 9:30

Christians who do not accepted Muhammad and the Qur’an are the most vile of created beings: “Nor did those who were given the Scripture become divided until after there had come to them clear evidence. And they were not commanded except to worship Allah, sincere to Him in religion, inclining to truth, and to establish prayer and to give zakah. And that is the correct religion. Indeed, they who disbelieved among the People of the Book and the polytheists will be in the fire of Hell, abiding eternally therein. Those are the most vile of created beings.” — Qur’an 98:6

Muslims must fight against and subjugate Christians: “Fight those who believe not in Allah nor the Last Day, nor hold that forbidden what has been forbidden by Allah and His Messenger, nor acknowledge the religion of Truth, of the People of the Book, until they pay the Jizya with willing submission, and feel themselves subdued.” — Qur’an 9:29

And here’s my favorite New Testament verse, this time referring to the National Catholic Reporter and Ra’fat Al-Dajani: “Leave them; they are blind guides. And if a blind man leads a blind man, both will fall into a pit.” (Matthew 15:14) As the country sits transfixed with one of the strangest, divisive and most unpredictable presidencies in the history of the United States, lost in the madness has been the increase in Islamophobia since Donald Trump was elected president.

Islamophobia, defined as “unfounded hostility towards Muslims and therefore fear or dislike of all or most Muslims” has become frighteningly commonplace in the U.S. and this hatred and misinformation has found fertile soil in the past eight months of the Trump presidency.

The Council on American-Islamic Relations has documented 451 incidents that stemmed from anti-Muslim bias between April 1 and June 30, 2017, 15 percent of which were acts of violence against Muslims. This represents a 91 percent increase in anti-Muslim hate crimes during that time compared to the same time period in 2016….

The irony here is that most Americans really have no idea what is in the Quran, the Muslim equivalent of the Bible, beyond the mostly negative and out of context soundbites they hear on talk radio, cable TV or the internet. They have no idea that the three monotheistic religions that follow the same Abrahamic tradition, namely that Abraham was the first prophet of God, are Judaism, Christianity and yes, the third sibling, Islam….

As such, Islam recognizes as prophets many of the figures revered by Jews and Christians, including Abraham, Moses, and Jesus. For Muslims, Muhammad is not a divine being. Instead he is a prophet through whom God delivered his message and an example of piety to emulate. Muhammad is not the equivalent of Jesus in the Islamic tradition, rather it is the Quran that occupies the same central position in Islam as Jesus does in Christianity.

It would surprise many to know that the Prophet Muhammad is only mentioned a total of four times in the Quran while Jesus, the son of Mary, is mentioned 25 times and Moses 136 times. The Quran dedicates a whole chapter to Mary, who is the only woman mentioned by name in the sacred text.

The Islamic version of the Jesus story especially, is quite similar to the Christian version. Jesus is variously referred to as “Spirit from God, “Word from/of God”), “Prophet-Messenger of God,” and the “Messiah” who will come back on the Day of Judgment to destroy the Antichrist.

Beginning with his birth, Muslims believe that Jesus was born of the Virgin Mary in a miraculous birth ordained by God. The Quranic verse says:

“Relate in the Book the story of Mary, when she withdrew from her family, to a place in the East. She screened herself from them; then We sent to her Our spirit (angel Gabriel) and he appeared before her as a man in all respects. She said: ‘I seek refuge from you in God Most Gracious (come not near) if you do fear God.’ He said: ‘Nay, I am only a Messenger from your Lord, to announce to you the gift of a pure son.’ She said: ‘How shall I have a son, when no man has ever touched me, and I am not unchaste?’ He said: ‘So it will be, your Lord says: ‘That is easy for Me; and We wish to appoint him as a sign unto men and a Mercy from Us: It was a matter so decreed.’ ” (Quran 19:16-21).

The miracles performed by Jesus were not limited to his cradle according to the Quran. Muslims believe Jesus performed miracles throughout his life: “Then will God say: ‘O Jesus the son of Mary! Recount My favor to you and to your mother. Behold! I strengthened you with the Holy Spirit (the angel Gabriel) so that you did speak to the people in childhood and in maturity. Behold! I taught you the Book and Wisdom, the Law and the Gospel. And behold: you make out of clay, as it were, the figure of a bird, by My leave, and you breathe into it, and it becomes a bird by My leave, and you heal those born blind, and the lepers by My leave. And behold! you bring forth the dead by My leave.’ ” (Quran 5:110).

Naturally there are theological differences between Muslims and Christians regarding Jesus but there are far more similarities and these similarities are what should be emphasized in order to show the common ground between these two faiths, which together represent 4.1 billion followers worldwide and 55.3 percent of the world’s population….