That is fine for them to unite since they gods they pray to all lead to to the same false wanna-be god, Lucifer!

True Christians know better and will NOT have any fellowship with them!

1st Corinthians 10:20 “But I say, that the things which the Gentiles sacrifice, they sacrifice to devils, and not to God: and I would not that ye should have fellowship with devils.”

Pope Francis Dangerous Call For Interfaith Prayer, Each To His Own God

Evangelical Focus – Can you imagine an Apostle Paul who, at the Areopagus in Athens (Acts 17), invites his listeners (followers of various philosophical schools and ancient cults) to unite in prayer, each to his own god/ideal as a sign of fraternity?

Can you imagine an Apostle Peter who, in writing to Christians at the four corners of the Roman Empire (1st Peter 1:1), recommends that they raise petitions together with the faithful of the Eastern, Greek and Roman religions, to invoke the end of a pandemic?

For those who have a basic grasp of the biblical faith, this is pretty absurd. Not for Rome, though. Indeed, the Roman Catholic Church organized a “Day of Prayer and Fasting addressed to believers of all religions” under the auspices of the Higher Committee for Human Fraternity to pray together.

Catholics, Muslims and people of other religions or of no religion were all encouraged to pray to her/his own god or personal ideal for the pandemic to cease.

Biblical proximity is not universal fraternity

Before examining the theological problems behind the inter-faith prayer promoted by the Roman Catholic Church, it is important to be aware of the context of this initiative. The aforementioned Higher Committee for Human Fraternity was established in 2019, a few months after the meeting in Abu Dhabi between Pope Francis and Ahmed al-Tayyeb, Grand Imam of al-Azhar, the Muslim University in Cairo (Egypt). 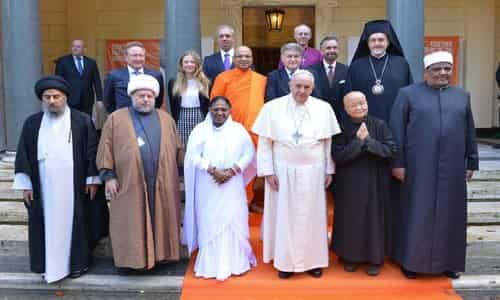 That meeting was centered on the signing of the controversial “Document on Human Fraternity for World Peace and Living Together”. In spite of the praise gathered in inter-faith circles, it is a controversial document for a simple reason: it joins the commendable attempt to build a peaceful society (especially in areas where the relationship between the Muslim majority and the Christian minority is tense) with the idea that Muslims and Christians are “brothers and sisters” praying to the same God.

In so doing, it wrongly exchanges proximity with fraternity, i.e. our being neighbors with all men and women, with our being brothers and sisters with those who belong to the family of God in Jesus Christ. While proximity connects people of different faiths and backgrounds and calls them to live in peace, fraternity is a spiritual bond that unites believers in Jesus Christ as believers.

The “Document on Human Fraternity” blurs the distinction and changes the meaning of fraternity, extending it to the relationships between peoples of different religions, as if Muslims and Christians are “brothers and sisters” praying to the same God.

An ever expanding “Catholic” trajectory

This day of prayer witnessed the participation of believers of all religions, but also of those who do not believe, united “spiritually” to pray to their divinity or ideal, all pleading for the end of the pandemic. Each participant was called to address his god/ideal in a spirit of fraternity that embraced everyone. What is at stake theologically is enormous.

Moving beyond the perimeter of the biblical faith, Roman Catholicism legitimizes prayers to other deities or religious ideals, silencing the prophetic message of Scripture that we either serve the biblical God or idols. It fails to bear witness to the claims of Jesus Christ as the God-man who came to save those who believe in him, and instead changes the meaning of fraternity by stretching it indiscriminately to all humanity, rather than believers in Jesus only. In so doing, the tenets of the biblical faith are trampled on.

This is a further move away from biblical Christianity. Not being anchored in Scripture alone, not being committed to Christ alone, Roman Catholicism is anxious to extend its ever-expanding catholicity (i.e. all-encompassing embracement) in all directions, even those clearly contrary to the basics of the Christian faith.

This is not even something new that was introduced by the current Jesuit Pope with his “uncertain” magisterium. It is rather a confirmation of the slippery slope of the “development” of what is already contained in Vatican II (Lumen Gentium n. 16), with its universalistic bent, which was visually represented at the inter-religious prayer of Assisi (1986, convened by John Paul II) and then confirmed by Francis’ apostolic exhortation of 2013 (Evangelii Gaudiumnn. 244-254), eventually culminating in the “Document on Human Fraternity” in 2019.

Present-day Roman Catholicism, while open to ecumenism with liberal Protestants, Eastern Orthodox and Evangelicals, does the same with Muslims, Buddhists, men of good will, etc. For Rome, unity is not only among Christians, but among all women and men as human beings.

This “unity” is based on the “gospel” of our common humanity, to which everyone belongs regardless of faith in Jesus Christ as Savior and Lord. The question remains, though: Is this the biblical gospel?

Back to Paul and Peter

Biblical proximity does not require common prayer and does not entail fraternity. At the Areopagus, while respectfully engaging various people in various contexts, Paul preached the gospel by calling all to repent and believe in the Man appointed by the Father who was raised from the dead, i.e. Jesus Christ (Acts 17:31). He was a good neighbor, but he did not call the Athenians “brothers and sisters”, nor did he ask them to pray with him.

To the Christians scattered all over the world, Peter did not give the advice of uniting in prayer with the peoples around them, but he did teach them to always be prepared to make a defense of the gospel (1 Peter 4:15). Peter wanted them to be good neighbors (e.g. 1st Peter 2:12), but always ready to proclaim the excellencies of him who had called them out of darkness into his marvelous light.

If Paul and Peter were informed of the “Day of Prayer and Fasting addressed to believers of all religions”, they would ask themselves: is this biblical Christianity?