Opus Dei is often described in the media as “cult-like.” The true personal freedom of numerary members, who make up 25-30% of all members, are hindered by methods that resemble those used by cults. This sex scandal is probably only the tip of the iceberg for the secretive and elitist cult founded in 1928 by a Spanish priest, Josemaria Escriva—now a saint—whose spiritual framework for Opus Dei is the idea that holiness could be found not in a monastery or in church but in ordinary life.

In a statement released by Msgr. Thomas Bohlin, Vicar of Opus Dei in the United States, the prelature expressed his sorrow and called any case of harassment or abuse “abhorrent.” Read more here

The proportion of US Catholics who regard priests as honest and ethical has plummeted to a record low of fewer than one in three, according to a survey.

The fall of 18 percentage points between 2017 and 2018 is attributed to the last year’s scandals over clerical sexual abuse.

Fewer than half of the Catholics surveyed by Gallup said they had confidence in organised religion, a drop of eight percentage points over the period.

The poll was conducted four months after the publication of a scathing grand jury report into sexual abuse and its cover-up by Catholic priests and bishops in Pennsylvania.

An investigation found that at least 300 priests had abused about 1,000 children and vulnerable adults over 70 years, and that their superiors had either stood by or in some cases actively covered up criminal acts.

Since the publication of the Pennsylvania report, at least 13 US states have opened formal investigations and some senior Catholics, including the archbishop of Washington, have resigned.

Positive views about the honest and ethical standards of clergy have almost halved in a decade, from 61% to 31%, but the most recent figures show the largest annual fall. Read the rest here

The current regime in Rome will damage the Catholic Church. Pope ­Francis combines laxity and ruthlessness. His style is casual and approachable; his church politics are cold and cunning. There are leading themes in this pontificate—­mercy, accompaniment, peripheries, and so forth—but no theological framework. He is a verbal semi-automatic weapon, squeezing off rounds of barbed remarks, spiritual aperçus, and earthy asides (­coprophagia!). This has created a confusing, even dysfunctional atmosphere that will become intolerable, if it hasn’t already.

Every pope sets a particular tone, a party line. Benedict made no secret of his desire for the Church to recover the dignity and transcendent orientation of the old ways of worship. But he was measured and never denounced or insulted those who prefer guitars and casual liturgies. St. John Paul II’s great intellectual project was to redeem the promise of mid-century Catholicism’s turn toward cooperation with secular humanism. He sought to fuse the modern turn to the subject and freedom with a full-spectrum affirmation of the doctrinal tradition. One can judge his project a success or a failure, but it is beyond dispute that his intention was to span the gap between today’s individual-­oriented ethos and Catholicism’s theocentrism. Read more here

PHILADELPHIA (AP) — Over the past four months, Roman Catholic dioceses across the U.S. have released the names of more than 1,000 priests and others accused of sexually abusing children in an unprecedented public reckoning spurred at least in part by a shocking grand jury investigation in Pennsylvania, an Associated Press review has found.

Nearly 50 dioceses and religious orders have publicly identified child-molesting priests in the wake of the Pennsylvania report issued in mid-August, and 55 more have announced plans to do the same over the next few months, the AP found. Together they account for more than half of the nation’s 187 dioceses.

The review also found that nearly 20 local, state or federal investigations, either criminal or civil, have been launched since the release of the grand jury findings. Those investigations could lead to more names and more damning accusations, as well as fines against dioceses and court-ordered safety measures.

“People saw what happened in these parishes in Pennsylvania and said, ‘That happened in my parish too.’ They could see the immediate connection, and they are demanding the same accounting,” said Tim Lennon, national president of the board of the Survivors Network of those Abused by Priests, or SNAP. 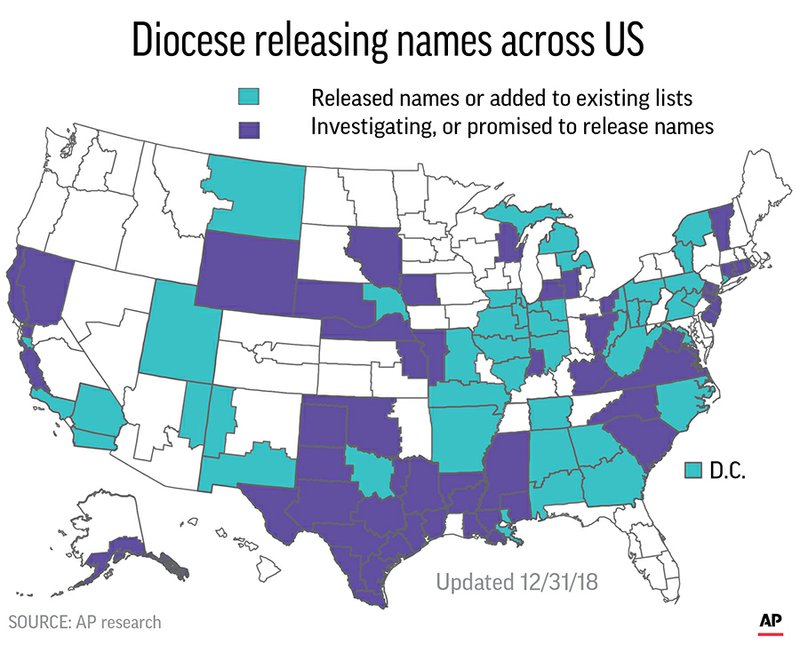 Many U.S. dioceses have released names of credibly accused priests between the August release of Pennsylvania grand jury report and the end of 2018, and more than 50 others have promised to release names in upcoming months.

The recently disclosed accusations date back six or seven decades in some cases, with the oldest from the 1910s in Louisiana. Most of the priests were long ago removed from ministry. An AP examination found that more than 60 percent are dead. In most cases, the statute of limitations for bringing criminal charges or suing has run out. Read more here