Joshua 13:12-13 All the kingdom of Og in Bashan, which reigned in Ashtaroth and in Edrei, who remained of the remnant of the giants: for these did Moses smite, and cast them out.13 Nevertheless the children of Israel expelled not the Geshurites, nor the Maachathites: but the Geshurites and the Maachathites dwell among the Israelites until this day.

Israel did not obey the LORD on multiple occasions to RID the land of enemies of the LORD, and hence suffered the consequences! If Nations DO NOT apply the same Biblical principles when dealing with these Refugees and Immigrants, they WILL convert God’s people to heathen ways, enslave and murder,  just as they did so long ago. Lucifer’s plan has NOT changed folks! It has just taken on a NEW Facade with the help of the False Prophet and Whore Babylonian Religion!

False Prophet tells Migrants: ‘You Are Warriors of Hope’ 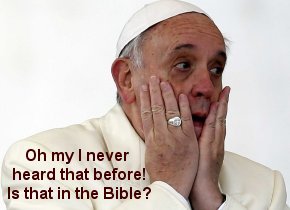 Even the Lesser Rats in the false religion have rebuked the Heresies of the head Rat they elected. BTW, God did not create the Catholic religion, elect the pope or create that position. Fallen man did!

Only under certain conditions and criteria are we to ALLOW strangers in.  Hebrews 13:8 “Jesus Christ the same yesterday, and to day, and for ever.”

Read this short article from Jihad Watch and then I will prove to you that the Bastard Pope (Hebrews 12:8) has no idea what he is talking about!

What’s more, all of the jihadis who murdered 130 people in Paris in November 2015 had just entered Europe as refugees. In February 2015, the Islamic State boasted it would soon flood Europe with as many as 500,000 refugees. The Lebanese Education Minister said in September 2015 that there were 20,000 jihadis among the refugees in camps in his country. On May 10, 2016, Patrick Calvar, the head of France’s DGSI internal intelligence agency, said that the Islamic State was using migrant routes through the Balkans to get jihadis into Europe.

Does Jesus Christ really expect us to expose our children and grandchildren to this threat? Maybe so, but whatever the truth about his opinions may be, in saying this the Pope is essentially reading out of the Catholic Church anyone who opposes mass Muslim migration. He is saying that to be concerned about a future Europe and North America that are likely to be full of bloodshed and civil strife is not a Christian position. As far as Pope Francis is concerned, the only Christian act in this regard is to choose to subject one’s children and grandchildren to dangers that could easily have been prevented were it not for these migration policies.

Is it really a Christian requirement to be in favor of one’s home country committing cultural suicide?

In spreading his nonsense, the Pope is endangering his own people, particularly in light of the papal idolatry that is rampant in the Catholic Church today.

“Pope Francis: Jesus Christ Himself Asks Us to Welcome Migrants ‘With Arms Wide Open,’” by Thomas D. Williams, Breitbart, September 27, 2017 (thanks to The Religion of Peace):

Pope Francis has once again launched an appeal for greater acceptance of migrants and refugees, insisting that it is Jesus Christ who urges us to welcome them.

“I welcome the migrants, asylum seekers and refugees who, together with the workers from Caritas Italy and other Catholic organizations, are the sign of a Church that tries to be open, inclusive and welcoming,” Francis said.

After thanking members of the group for their “untiring service,” the pontiff asked the thousands gathered in the Square to offer them a “big round of applause.”

“With your daily life,” he said, “you remind us that Christ himself asks us to welcome our brother and sister migrants and refugees with arms wide open.”

“That’s right, with arms wide open,” Francis continued, “ready for a sincere, affectionate and encompassing embrace, kind of like this Colonnade of Saint Peter’s Square, which represents the church as mother embracing everyone, sharing in the common journey.” The Pope was referring to the rows of columns flanking Saint Peter’s Square like two open arms, designed by Italian artist and architect Gianlorenzo Bernini….

Last week, the Pope urged European nations to welcome more migrants throughout the continent, telling his hearers to beware of the “intolerance, discrimination and xenophobia” that have sprung up around Europe.

Speaking with directors of the Church’s pastoral work with migrants, the Pope recognized the malaise caused by the “massive migrant flows” in Europe that have “thrown into crisis migratory policies held up to now.”…

“I won’t hide my concern in the face of the signs of intolerance, discrimination and xenophobia that have arisen in different regions of Europe,” the pontiff said, which are “often fueled by reticence and fear of the other, the one who is different, the foreigner.”

“I am worried still more by the sad awareness that our Catholic communities in Europe are not exempt from these reactions of defensiveness and rejection, justified by an unspecified ‘moral duty’ to conserve one’s original cultural and religious identity,” he said. Source: Jihad Watch

I will let scripture speak for itself.

Some of you Biblically ignorant folks will say the following is Old Testament. True, but that is why I put  Hebrews 13:8 “Jesus Christ the same yesterday, and to day, and for ever.” If we do not learn from the past, we repeat it in the present and future!

God required the strangers to convert to Israel’s ways not vice versa. Look at the story of Naomi and Ruth. She did not try and convert Naomi. Ruth chose to follow the God of Naomi and rejected her heathen gods that her sister, Orpah, went back to! Ruth was Blessed when she chose to follow the True God! Ruth 1:16–17 “Don’t urge me to leave you or to turn back from you. Where you go I will go, and where you stay I will stay. Your people will be my people and your God my God. Where you die I will die, and there I will be buried. May the Lord deal with me, be it ever so severely, if even death separates you and me”  She did RIGHT and assimilated into the ways and culture of her NEW country and Family!
See a good synopsis here.

Exodus 12:48-49 “And when a stranger shall sojourn with thee, and will keep the passover to the LORD, let all his males be circumcised, and then let him come near and keep it; and he shall be as one that is born in the land: for no uncircumcised person shall eat thereof. 49 One law shall be to him that is homeborn, and unto the stranger that sojourneth among you.”

Leviticus 19:33-34 “And if a stranger sojourn with thee in your land, ye shall not vex him. 34 But the stranger that dwelleth with you shall be unto you as one born among you, and thou shalt love him as thyself; for ye were strangers in the land of Egypt: I am the LORD your God.”

Numbers 33:50-56 “And the LORD spake unto Moses in the plains of Moab by Jordan near Jericho, saying,51 Speak unto the children of Israel, and say unto them, When ye are passed over Jordan into the land of Canaan;52 Then ye shall drive out all the inhabitants of the land from before you, and destroy all their pictures, and destroy all their molten images, and quite pluck down all their high places:53 And ye shall dispossess the inhabitants of the land, and dwell therein: for I have given you the land to possess it.54 And ye shall divide the land by lot for an inheritance among your families: and to the more ye shall give the more inheritance, and to the fewer ye shall give the less inheritance: every man’s inheritance shall be in the place where his lot falleth; according to the tribes of your fathers ye shall inherit.55 But if ye will not drive out the inhabitants of the land from before you; then it shall come to pass, that those which ye let remain of them shall be pricks in your eyes, and thorns in your sides, and shall vex you in the land wherein ye dwell.56 Moreover it shall come to pass, that I shall do unto you, as I thought to do unto them.”

Someone needs to show these, and other scriptures, to the Hound of Hell before he opens his mouth and spews ignorance!