Making an appearance at the Nativity scene in St. Peter’s Square on Tuesday, 83-year-old Pope Francis was greeted by thousands of tourists and Romans.

When the woman tugged at the Pope, he struck her hand twice in an attempt to free his own hand and scowled as he walked away.

It’s not clear what the woman was saying as she tugged Pope Francis toward her. Copy Source 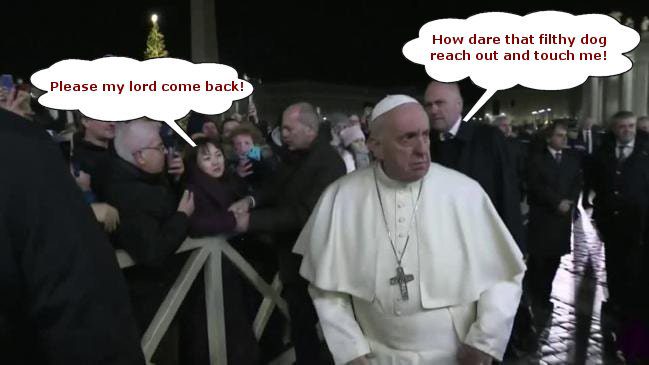 Hey Pope, What would Jesus do?

He, Jesus, certainly would NOT have hit a poor soul who reached out to touch him. Maybe this poor unsaved soul figured if she could touch him, she would secure her place in heaven like Mary. Or perhaps she had an “issue of blood” like the woman in Matthew 9 and figured since he is divine, she could get her healing!

Matthew 9:20-22 “And, behold, a woman, which was diseased with an issue of blood twelve years, came behind him, and touched the hem of his garment: 21 For she said within herself, If I may but touch his garment, I shall be whole. 22 But Jesus turned him about, and when he saw her, he said, Daughter, be of good comfort; thy faith hath made thee whole. And the woman was made whole from that hour.”

Nope! What she got was a rebuke. She was hit like someone hit a DOG who was begging to get scraps from the table!

Matthew 15:24-28 “But he answered and said, I am not sent but unto the lost sheep of the house of Israel. 25 Then came she and worshipped him, saying, Lord, help me. 26 But he answered and said, It is not meet to take the children’s bread, and to cast it to dogs. 27 And she said, Truth, Lord: yet the dogs eat of the crumbs which fall from their masters’ table. 28 Then Jesus answered and said unto her, O woman, great is thy faith: be it unto thee even as thou wilt. And her daughter was made whole from that very hour.”

This poor deceived Catholic woman was just trying to touch her false god and maybe get a few “scraps”, or perhaps a blessing. But like all false gods, he does not want certain minions to touch him.

Disgruntled Pope Francis pulls himself free from woman’s grasp. Reuters dose not mention the FACT that he hit the woman’s hand several times!

After reaching out to touch a child, the pope turned away from the crowd only for a nearby woman to seize his hand and pull her toward him. The abrupt gesture appeared to cause him pain and Francis swiftly wrenched his hand free.

It looked more like fans at a rock concert or a Hellywood event, where fans try to touch their Idols. Maybe she should have stripped off her panties and offered them to him. Maybe then he would have embraced her. Ooop’s…, my bad, the woman is the wrong sex for that sort of thing, IF you get my insinuation!!!

Maybe his holiness is trying to be like the supposed first pope and not mingle with the gentiles. Perhaps he picked up a Bible and it fell open to Galatians 2?  Maybe the god complex has clouded his demented 83 year old mind?

Galatians 2:11-12 “But when Peter was come to Antioch, I withstood him to the face, because he was to be blamed.12 For before that certain came from James, he did eat with the Gentiles: but when they were come, he withdrew and separated himself, fearing them which were of the circumcision.”

Steve Shirley – The city of Antioch (where people were first called Christians: Acts 11:26) was where this occurred. It was a city that had a large population of Gentile Christians. Peter ate meals with these Christians on a regular basis. A Jew sharing meals with a Gentile was something that had previously been unacceptable according to Jewish tradition (Acts 10:28). However, God nullified this tradition when He told Peter in a vision that Gentiles should not be considered unclean (Acts 10:1-11:18). This acceptance of Gentile Christians was later reaffirmed during the Jerusalem Council (Acts 15:1-29).

However, when some Jews arrived in Antioch from Jerusalem, Peter gradually began to withdraw from eating with the Gentile Christians, and instead ate with the Jewish Christians. (Gal 2:12) says he did this because he feared these Jews. He likely “feared” them because he wanted to be liked and popular, plus he probably did not want word to get back to Jerusalem that he was eating with the Gentiles. (This reminds me of a friend I used to have in high school who would hang out with me until the “popular” group arrived, then he would act like he didn’t know me.)

In making this decision, Peter was guilty of several sins, and Paul called him out on them in front of everyone. As the text says, his primary sin (as well as the other Jews who followed his lead) was that he “walked not uprightly according to the truth of the gospel” (Gal 2:14). In other words, he was teaching a false gospel. He believed in salvation by grace, but by withdrawing from the Gentile Christians, he was showing with his actions that he believed Jewish traditions were superior. In (Gal 2:14), Paul says Peter was trying to “compel the Gentiles to live like Jews.” In doing this, Peter was creating a divide between Jewish and Gentile Christians, thus breaking the unity of the church. He was “nullifying the grace of God” (Gal 2:21).

Because of this action, Paul called Peter a hypocrite. He believed one thing, but did something else. As a leader in the church, he was to set a good example for others, but instead, his hypocritical actions led others astray (other Jews followed his lead including “even Barnabas”)(Gal 2:13) and certainly upset the Gentile Christians. He also acted in complete opposition to the vision God had given him earlier that the Gentiles were to be considered equal to the Jews.

Stockholm Syndrome is a condition which causes hostages to develop a psychological alliance with their captors during captivity. These alliances result from a bond formed between captor and captives during intimate time together, but they are generally considered irrational in light of the danger or risk endured by the victims. Source

No matter how much physical and mental abuse, false doctrine and proof that they are being led astray, they cling to this Synagogue of Satan like white cat hair on a black garment!

Alex Jones and Leo Zagami on the Satanic Rituals and Pedophilia in the Catholic Church.