Clear your mind……….., read the scripture several times……….., and let it sink in for a few minutes. Now, if you can reason out and cypher two and two, you should come up with the correct answer of 4!

VATICAN CITY (Reuters) – The Vatican said on Saturday it had opened an investigation into reports that a former teenage altar boy, who allegedly repeatedly forced a dormitory mate to have sex with him, went on to become a priest.

The allegations concerning the St. Pius X Institute, known as a pre-seminary, were made in a recent book and in Italian television reports. 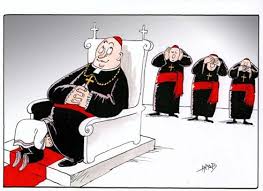 The pre-seminary is a residence inside the Vatican for altar boys who serve at masses in St. Peter’s Basilica mostly presided over by priests, bishops and cardinals. At times they also participate in papal liturgies.

The boys go to Italian schools while they live in the Vatican, a sovereign city-state surrounded by Rome.

The reports said that despite complaints to superiors against the teenager, he was accepted into what is known as a major seminary when he became an adult. He was later ordained a priest and is now serving in a parish in northern Italy, they said. Source: Reuters

Yep he was reported to “superiors”. The same ones who were probably packing his gravel and training him to be a homosexual! What the Hell is wrong with you people who are Catholics? Are you so blinded by religion you can’t see what is going on?

ALL of them are Liars, Drunks and Perverts! Wake the Hell up you stupid people!