Do you reckon he is a Fudge Packer himself??

CNS News – Jesuit priest Fr. James Martin, an American who pushes a pro- LGBT agenda in the Catholic Church and who was made a consultant to the Vatican’s Secretariat for Communications by Pope Francis, is now promoting a rosary (prayer beads) that includes a “rainbow” fifth decade for people to pray “for LGBT couples, their children, and extended families.”

It further calls for praying that gays be fully accepted as “truly created in the image of God, a creation that God saw as ‘good.'”

Fr. Martin has been denounced by many priests and laity for repeatedly misrepresenting Chruch teachings on homosexuality. For instance, Martin’s 2017 book, Building a Bridge: How the Catholic Church and the LGBT Community Can Enter Into a Relationship of Respect, Compassion and Sensitivity, was described by Fr. Gerald Murray as “a rejection” of Church teaching and an attempt to claim that the Church “has misunderstood God’s plan for human sexuality for her entire history.” 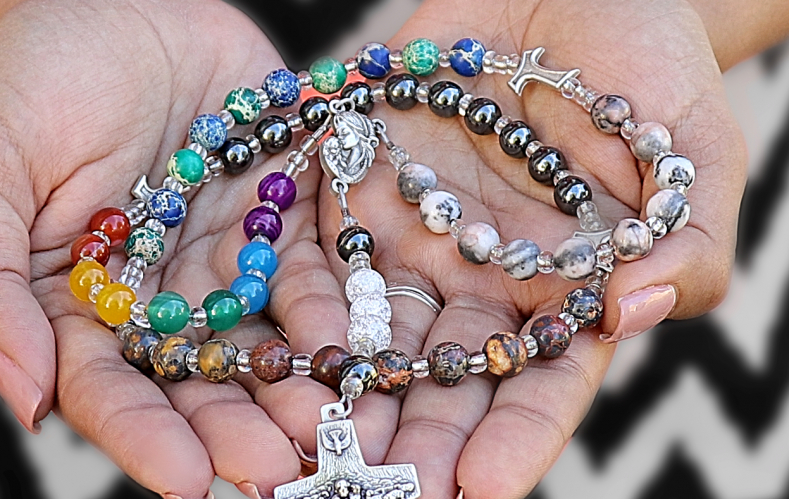 As to the rainbow-decade rosary, Lepanto Institute President Michael Hichborn said its promotion by Martin was “nothing short of sacrilege,” reported Life Site News.

In a Dec. 3 post on Facebook, Fr. Martin praised the “ Rosary of Modern Sorrows” — in contrast to the traditional sorrows/sufferings of Christ — as a “beautiful gift” that invites one to pray “for a variety of people who suffer — unborn children, victims of gun violence, refugees and migrants, victims of racism, LGBT people, and so on: one group for each ‘decade.'”

“I’ve seen many Rosaries like this, but this to me was the most beautiful,” said Martin.

He further said, “Normally, I don’t promote things for sale (and no one asked or paid me to do this) but I thought some of you might like both pieces: the Rosary of Modern Sorrows and the new Holy Family Christmas card.” Fr. Martin then provides links to the store selling the items, Contemplative Rebellion.

Read more about this Idiocy here