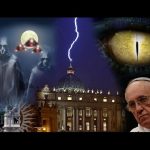 Won’t be long before the Apostate Evangelical Clergy Traitors jump on board! Clergy Response Teams working for the Luciferian Government NASA hires Catholic Priest to prepare Religions for Encounter with Aliens Israel 365 News – NASA has recruited a British priest to prepare the religious for the discovery of alien life as space agencies claim … Click Here to Read more

Just more proof that Catholicism is the Whore Religion leading Billions to Hell! Breitbart – The head of the Jesuit order, (Black Pope and chief Luciferian) Father Arturo Sosa, has denied the existence of the devil as a real being, suggesting rather that humans invented Satan as a “symbolic” figure to represent evil.

In an interview with the Spanish newspaper El Mundo, Father Sosa was asked whether he believes that evil is a process of the human psychology or comes from a superior being.

“We have created symbolic figures such as the devil to express evil,” Father Sosa said. “Social conditioning can also represent this figure, since there are people who act like this because they are in an environment where it is difficult to act to the contrary.”